Senior Congress leader Jairam Ramesh, however, defended Rahul Gandhi, saying that he did not target the Hindutva ideologue but only highlighted a "historical fact". He affirmed that it would not impact the MVA alliance. 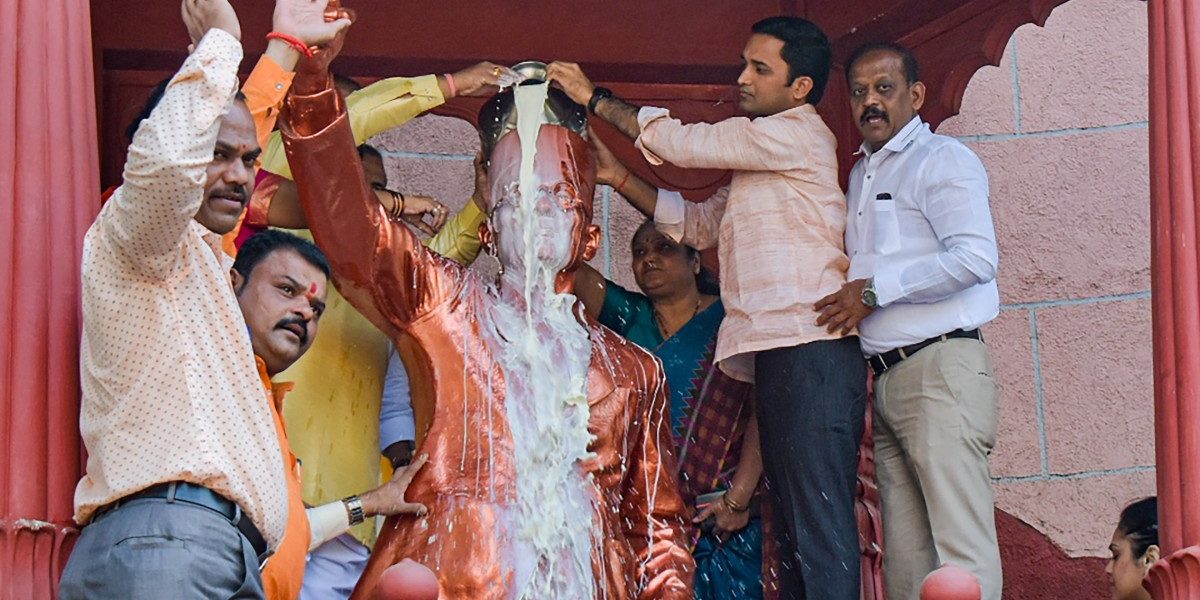 Earlier in the day, senior Congress leader Jairam Ramesh defended Rahul Gandhi, saying that he did not target the Hindutva ideologue but only highlighted a “historical fact”, but also said it would not impact the MVA alliance.

Gandhi, during a press conference at Wadegaon in Akola district on Thursday, November 17, alleged that Savarkar had helped the British and written a mercy petition to them out of fear. Two days earlier, he had made similar remarks.

Gandhi’s consistent attacks on Savarkar have put Uddhav Thackeray-led Sena in a spot.

Protests were staged across Maharashtra by the Bharatiya Janata Party (BJP) and other right-wing organisations against Rahul Gandhi. A shutdown was observed at Bhagur, Savarkar’s birthplace in Nashik district.

Sanjay Raut, a key leader of the Uddhav Thackeray-led Sena, said Jairam Ramesh called him and the two had a long conversation on the issue.

Talking to reporters, Raut said any defamatory remarks against Savarkar were “unacceptable” to the Shiv Sena.

He said Gandhi’s Bharat Jodo Yatra is getting good response all over the country, mostly in Maharashtra, and raising important issues like unemployment and farmers’ problems.

“There was no reason to raise the issue of Veer Savarkar. This could lead to cracks in the MVA because we idolise Veer Savarkar,” he said. The MVA also includes the Nationalist Congress Party.

Gandhi, during a press conference at Wadegaon in Akola district on Thursday, alleged that Savarkar had helped the British and written a mercy petition to them out of fear. Two days earlier, he had made similar remarks.

Gandhi’s consistent attacks on Savarkar have put Uddhav Thackeray-led Sena in a spot. “This (Gandhi’s comments) has not only impacted the Shiv Sena, but also some of the Congress leaders in Maharashtra. People in Maharashtra and a large section of people in the country have respect for Veer Savarkar,” Raut further said.

Addressing a press conference in Maharashtra’s Buldhana district in the morning, Ramesh said, “Gandhi had mentioned Savarkar in the context of how tribal leader Birsa Munda did not compromise with the British while Savarkar signed a mercy petition, which is a fact.”

“It was a fact that Mahatma Gandhi’s assassin Nathuram Godse was influenced by Savarkar and it was Savarkar’s ideology that was behind the killing of Mahatma Gandhi,” the Congress leader claimed.
Ramesh further said the Congress and the Thackeray-led Sena differed on their views regarding Savarkar, but it will have no bearing on the MVA alliance.

The Bharatiya Janata Party, meanwhile, continued to hit out at Rahul Gandhi as well as Thackeray-led Shiv Sena over the issue.

Former prime minister late Indira Gandhi and many other Congress leaders had called Savarkar a staunch nationalist and even communist leader Shripad Dange had described Savarkar as a revolutionary, he claimed.

He also referred to the words used by Mahatma Gandhi at the end of his letters to British rulers such as “I beg to remain your Royal highness’s faithful servant”. Rahul Gandhi had targeted Savarkar for using similar words in his petitions sent to the government from the prison.

Fadnavis said letters cited by the Congress leader while making critical remarks against freedom fighter Savarkar were common during the British rule and even Mahatma Gandhi used to write such missives.

Addressing a rally in Bhavnagar ahead of next month’s Assembly elections in Gujarat, the Bharatiya Janata Party (BJP) leader slammed the Congress MP, saying he is fond of insulting national heroes except those belonging to the Gandhi-Nehru family.

The police in Thane city of Maharashtra registered a case of defamation against Rahul Gandhi for his “derogatory” remarks against Savarkar on a complaint lodged by a functionary of the Shiv Sena faction led by Maharashtra chief minister Eknath Shinde.