A section of the party's leaders met recently, asserting that the Grand Old Party cannot be revived from its current moribund state unless there is internal social justice first. 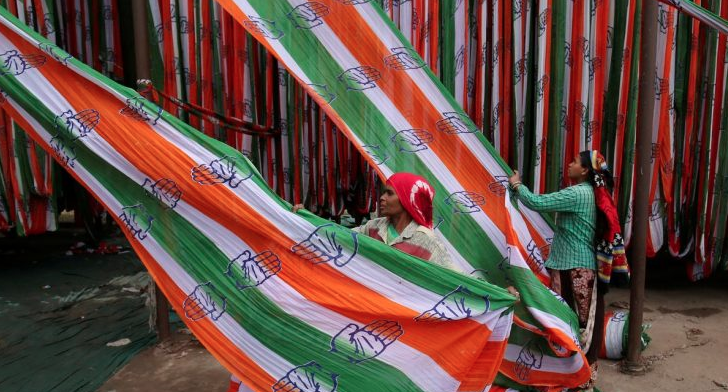 A worker pulls a roll of flags of the Congress party kept for drying at a manufacturing factory in Ahmedabad, March 13, 2019. Photo: Reuters/Amit Dave/File Photo

Hyderabad: Close on the heels of a storm in the Congress over the change of leadership in the high command, internal rumblings are also underway in the party’s Telangana state unit, with a group of leaders planning a similar campaign for a democratic overhaul with the vision to achieve social justice.

A collective of leaders from the Scheduled Caste and Backward Class communities and the other sections met in Warangal a couple of days ago, asserting that the Congress cannot be revived from its current moribund state unless it revisits the BC-SC formula advocated by Dalit leader Damodaram Sanjivaiah in the aftermath of Independence.

The collective is pitching for a vibrant local leadership that represents the Bahujan population as a substitute to the what they called the “sycophants” who are currently at the helm, merely at the mercy of the top brass in Delhi.

The Congress party ruled the undivided Andhra Pradesh for a decade from 2004. But after the creation of Telangana in 2014, it is facing an existential threat in both the Telugu states. The results of the assembly and parliament elections in Telangana (in 2018 and 2019 respectively) revealed that the party is fast losing its opposition space to the BJP. Only the saffron party now has the ability to challenge the Telangana Rashtra Samithi (TRS) patriarch K. Chandrashekhar Rao emergence as an unquestioned leader of the state.

Some sections in the party blame the gloomy situation on the party’s failure to come out of the grip of the upper caste Reddys. Since the Independence, the Congress has been heavily dependant on the landed Reddys in the two Telugu states for its survival. 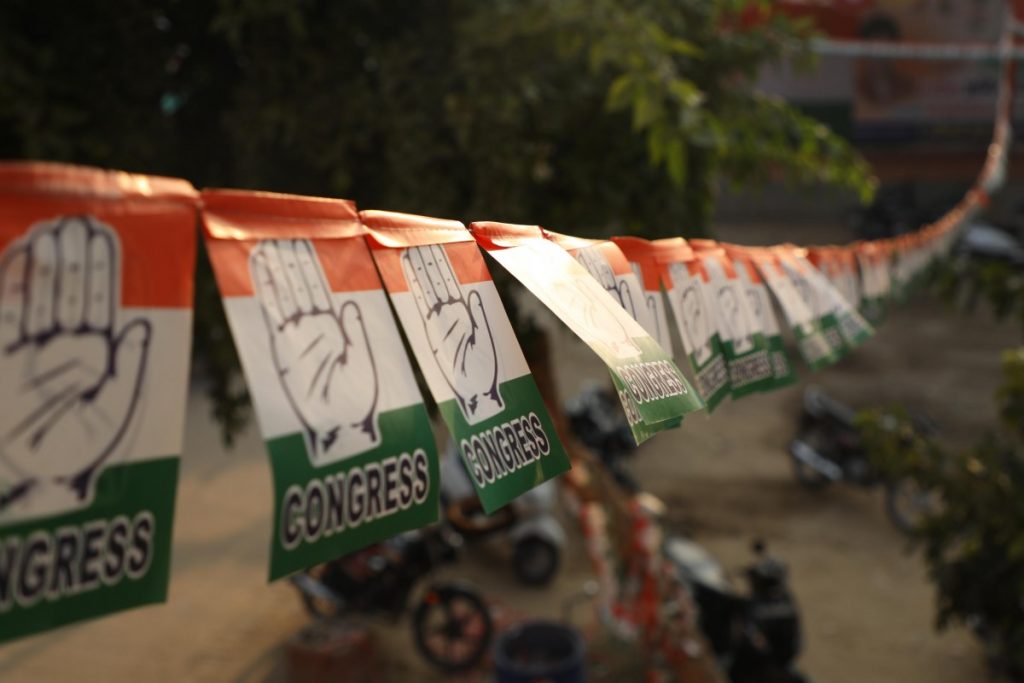 When the Congress put up a poor show in the 2014 assembly elections, winning just 21 seats, Telangana Pradesh Congress Committee (TPCC) president Ponnala Lakshmaiah, a Backward Classes leader, was asked to resign. The moral responsibility of the defeat was assigned to him, though it was clear that the TRS had been successful in appropriating the credit for achieving a separate state.

Lakshmaiah was replaced by N. Uttam Kumar Reddy in 2015. Under Reddy’s leadership, the party’s tally in the assembly dipped to 19 after the elections in 2018. Reddy even failed to ensure the election of his wife Padmavathi Reddy in the by-election in Huzoor Nagar. The seat was earlier held by Uttam himself and became vacant after his election to the Lok Sabha.

Also Read: Sonia Gandhi Should Realise Only Democracy Can Save the Congress Now

The Congress again put up an abysmal show in the elections to urban local bodies in 2019. The TRS swept the polls, bagging 100 out of 120 municipalities and eight out of nine municipal corporations. The rise of the BJP in Telangana is attributed to the handicaps that continue to haunt the Congress. The BJP’s vote share rose from 7% in the assembly elections held in 2018  to 20% in the parliament elections the next year. The saffron party also won Lok Sabha seats, one more than the Congress.

That despite repeated electoral setbacks for the Congress, there has been no change of leadership and Uttam manages to hold on to his position has triggered a storm of dissidence in the party. In the context of a letter sent by 23 Congress leaders seeking a change in the top leadership, the charge against Uttam Kumar Reddy that he is at the helm only due to his loyalty to the Gandhi family gained credibility. The TPCC president took the lead in collecting “unanimous” resolutions from all the District Congress Committees (DCCs) in Telangana defending Sonia Gandhi’s leadership. 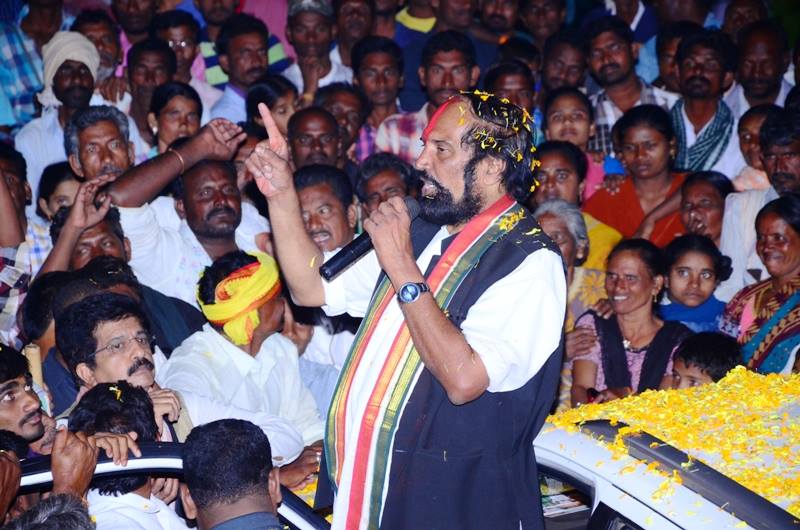 The rival factions within the party launched a tirade against Uttam, branding him as a “covert agent” of chief minister KCR. They claim that his nexus with the TRS is responsible for the grand old party’s series of poll debacles. Dissident leader Gajjala Kantham complained to the party’s central leadership, saying the TPCC chief is hobnobbing with the TRS government allegedly to slow down an investigation into a Rs 5,000 crore housing scam which allegedly took place when Uttam Kumar Reddy was housing minister during the Congress rule (2009-14) in Andhra Pradesh. Chief minister K. Chandrasekhar Rao in his election addresses in 2018 promised to bring Uttam Kumar Reddy to book. That nothing of the sorts has happened yet has given rival party factions an opportunity to level allegations of a “nexus”.

Speaking to the media recently, the TPCC working president A. Revanth Reddy did not rule out an on-going internal tussle for power among different social groups. Achieving consensus among the BCs – under which there are 119 sub-castes and communities in the state – however, appears to be a difficult task, he said.

Revanth also said that it is up to the Congress top brass if it wishes to have someone from the Reddy caste at the helm in the state. Revanth’s comments once again suggested the dominance of the Reddys within the Congress.

His comments came against the backdrop of OBC leaders like Ponnala Lakshmaiah, V. Hanumantha Rao and Anjan Kumar Yadav reportedly planning to make a bid for the TPCC president’s position.

Addanki Dayakar, a senior Dalit leader and one of the participants of the Warangal meet, told The Wire that the future for the Congress will be bleak in the next state elections – due in 2023 – unless it forges a social cohesion with the BCs and SCs at the helm. “We will take this slogan to every nook and corner of the state. We are aiming to adopt the YSR (Y.S. Rajasekhara Reddy, the party’s former chief minister)’s action plan to realise Sanjivaiah’s dream of social justice,” Dayakar said.

Reddy grew organically in stature as a leader  and his status was independent of the Gandhi family’s steel frame. He is credited with the Congress’s revival in Andhra Pradesh. He oversaw consecutive electoral successes in 2004 and 2009, before his untimely demise in September 2009. 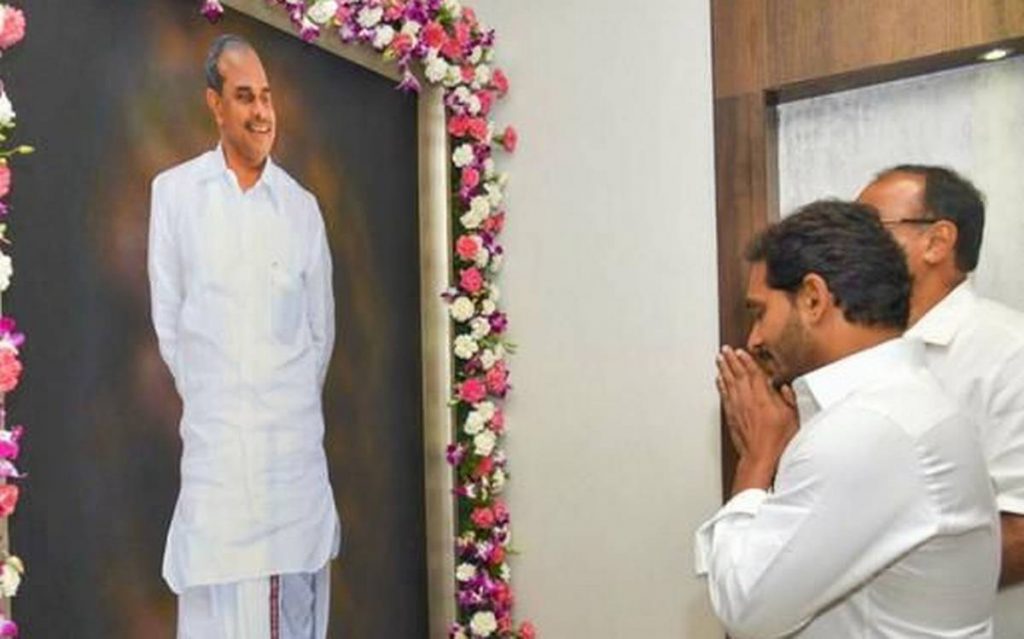 Dayakar said that the regional meeting held at Warangal was headed by Katla Srinivas, former vice-president of the district congress committee. “We will have more regional meetings covering all the districts before holding a state-level conference with prominent leaders, pressing for social justice within the party,” Dayakar explained.

Uttam completed his three-year term as PCC president in 2018. Still, he has been allowed to continue for another term, which is scheduled to expire in March 2021. Even as the party high command was embroiled in a leadership crisis, aspirants for the TPCC chief post – in anticipation of changes in the state party leadership – are busy making a beeline to 10 Janpath.

Among the notable aspirants from the upper-caste Reddys were Revanth Reddy, currently working president of the TPCC, and Komatireddy Venkata Reddy, the MP from Nalgonda district. A BC leader in the party, wishing to remain anonymous, accused the upper-caste Reddys of conspiring to not let the top state post out of their hands in case Uttam Kumar is replaced.

Note: This article has been edited to more accurately reflect Gajjala Kantham’s comment, available in the public domain, on Uttam Kumar Reddy.