Telangana: Ahead of By-Election, BJP Workers Assault Police, Flee with Cash During Raids

The Dubbaka assembly segment in Telangana's Siddipet district is going for by-election on November 3. 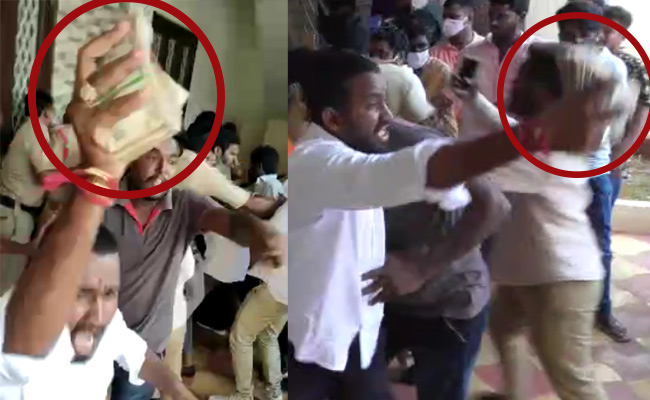 Screenshot from a video published on Twitter by ANI.

New Delhi: Ahead of the upcoming by-poll in Dubbaka assembly constituency on November 3, dramatic scenes were witnessed on Monday at the house of a relative of BJP candidate Raghunandan Rao, from where police had allegedly seized Rs 18.67 lakh, according to a News Minute report. 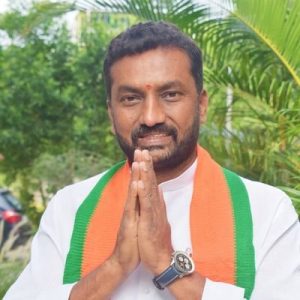 The Siddipet police alleged that BJP supporters had assaulted two policemen who were carrying out searches and fled with Rs 5.81 lakh of the Rs 18.67 lakh seized from the house of Surabhi Anjan Rao, Raghunandan Rao’s brother-in-law.

There are different versions on how much amount was taken away by BJP supporters, however, the police said it was Rs 5.81 lakh.

A video, which has now become viral, shows a policeman holding a bag filled with cash when a group of BJP workers converge on him and force him to show what’s in it. When policemen resist the efforts of the mob to lay hands on the bag, they are assaulted, and two of the assaulters display a wad of cash from the bag and shout “It’s money”. In the ensuing melee, policemen have a hard time chasing those who are in the possession of money.

#WATCH: Ruckus was created during the search that was conducted at a location related to BJP’s Dubbak assembly seat by-poll candidate Raghunandan Rao.

While the supporters of Raghunandan Rao accused police of planting money at Anjan Rao’s house to implicate him, police said they had incriminating evidence in the form of video footage to act legally against those who assaulted cops and fled away with the money.

Siddipet police commissioner Joel Davis confirmed that they had carried out searches at three houses on Monday, upon receiving information that attempts were being made to influence voters with money. Accordingly, the house of Siddipet municipal chairman Kadvergu Raja Narsu, connected to the ruling Telangana Rashtra Samithi, and Surabhi Ramgopal (Raghunandan Rao’s father-in-law) and Surabhi Anjan Rao (Raghunandan Rao’s brother-in-law) houses were raided.

“In Surabhi Anjan Rao’s house, Rs 18.67 lakh was found. He claimed his brother-in-law Jithender Rao had sent the money to him. When the money was being brought out, around 20-30 members entered the compound and snatched away around 5.81 lakhs. We have video evidence and based on that identification and legal action will follow,” police commissioner Davis said, according to The News Minute.

Meanwhile, police also detained BJP state president Bandi Sanjay when he arrived in Siddipet to extend solidarity with his partymen.

The Telangana unit of BJP had condemned police raids, but remained silent on the attack against the policemen. BJP MLC N Ramchander Rao described police raids against his party candidate as borne out of “political vendetta”. He accused that the ruling TRS was behind the police raids, and said that it was a sign of TRS staring a defeat in the ensuing bye-election.

TRS leader and finance minister T Harish Rao, who is the party’s lead campaigner for the upcoming election, accused the BJP of using money more than having faith in itself to win the Dubbaka assembly segment, according to a report of The New Indian Express.

While pointing out that the police had also raided his party leader Raja Narsu’s house, along with the houses of those connected to Raghunandan Rao, Harish Rao lashed out at the BJP activists by saying that they had acted like goons.

Also read: BJP’s Rise in Telangana Comes as a Shock to TRS

Harish Rao also alleged that the Cyberabad police had earlier recovered Rs 40 lakh unaccounted cash meant for distribution in Dubbaka by Raghunandan Rao at Shameerpet on the outskirts of Hyderabad.

The Congress, for its part, expressed concern over the incident. Senior Congress leader V Hanumantha Rao alleged that both TRS and BJP were resorting to “cash-for-votes” politics to mislead voters.

The Dubbaka election has been necessitated by the death of TRS MLA S. Ramalinga Reddy. Although it has always been a TRS stronghold, this time around BJP and Congress are keen on giving a tough time to the ruling party. While TRS has fielded Solipeta Sujatha, wife of late MLA Ramalinga Reddy, Raghunandan from the BJP and Cheruku Srinivas Reddy from the Congress, a TRS turncoat, are in the fray.