Yadav, however, brushed aside the incident, saying he was in Patna while the posters were being put up. 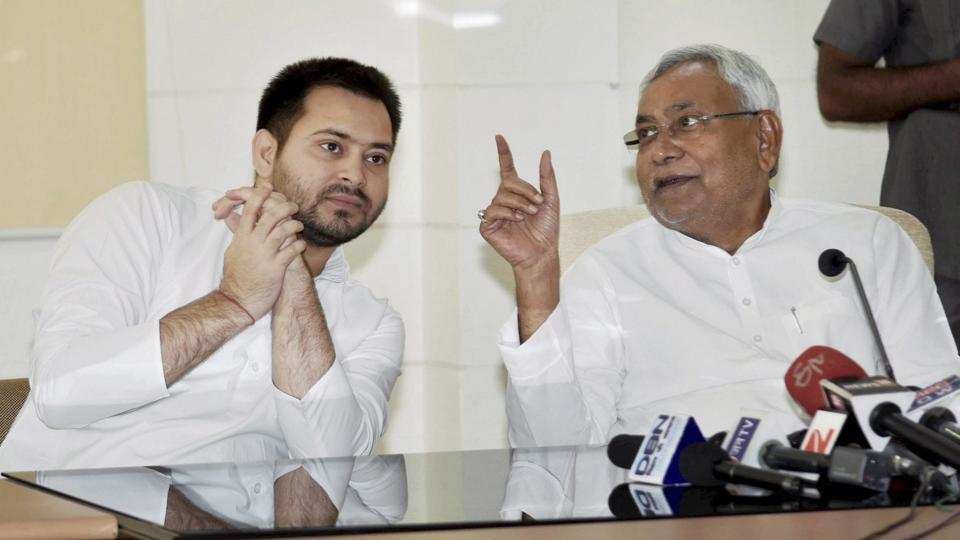 Patna: In a fresh controversy surrounding RJD leader Tejashwi Yadav’s ongoing Samvidhan Bachao Yatra, posters were put up in Nawada district ahead of his arrival there featuring him with local MLA Raj Ballabh Yadav who is in jail for allegedly raping a minor girl.

Yadav, however, brushed aside the incident, saying he was in Patna while the posters were being put up in the central Bihar town by enthusiastic supporters.

The former deputy chief minister also said the MLA was facing trial and was yet to be proven guilty by the court.

The ruling JD(U) in the state shot off an open letter to his mother and RJD national vice-president Rabri Devi, cautioning her against her sons hobnobbing with people who were “synonymous with terror for the women of Bihar”.

“Is it necessary to bestow honour on a rape accused? Your husband Lalu Prasad is serving sentences in corruption cases. Is it essential to be corrupt and a rape accused for upholding the virtues of social justice and communal harmony,” JD(U) spokesman Neeraj Kumar said in his letter.

“The people your son has been of late hobnobbing with and the person whose image can be found on posters and banners in Nawada ahead of your son’s visit, have been synonymous with terror for the women of Bihar,” he said.

Kumar asked if as a woman, she would herself favour other woman living in a state of perennial terror.

His remarks came in the backdrop of Tejashwi Yadav’s visit to districts like East Champaran, Gopalganj and Siwan last week as part of the statewide tour which was mired in controversies on account of reports of the RJD leader maintaining close links with people with criminal backgrounds.

His tour of Siwan was marked by a visit to the village of Mohd Shahabuddin, one of the most dreaded history-sheeter politicians of Bihar. His life sentence in a double murder case was upheld by the Supreme Court.

Shahabuddin’s wife, Hina, had shared the stage with the RJD heir apparent at his Siwan rally.

This was followed by a photograph showing Yadav sharing the stage with a criminal named Suresh Chaudhary in Gopalganj district. There were also images and video footage of a crown being placed on his head by Rajan Tiwari another notorious gangster-turned-politician, in East Champaran district.

Upon reaching Nawada, Tejashwi Yadav told reporters, “I could not have preempted, while in Patna, what enthusiastic supporters were going to do in Nawada.”

“Moreover, Raj Vallabh Yadav is yet to be proven guilty by a court. He has been named an accused but so am I. I am out on bail,” he said.

The former Bihar deputy chief minister was named as an accused in a money laundering case lodged by central investigating agencies. He got bail by a Delhi court recently.

Training guns at chief minister Nitish Kumar, who is also the JD(U) national president, Yadav claimed his name had cropped up in a murder case.

“The Delhi high court imposed a cost on him in another case relating to plagiarism. Before pointing fingers at others, JD(U) leaders need to question their leader,” he said.