Activism and Tokenism: When Corporates Use Ad Campaigns to Mask Their Infractions

Whether Tata Tea or Pepsi, the ads mock the work done by activists, reducing them to caricatures. 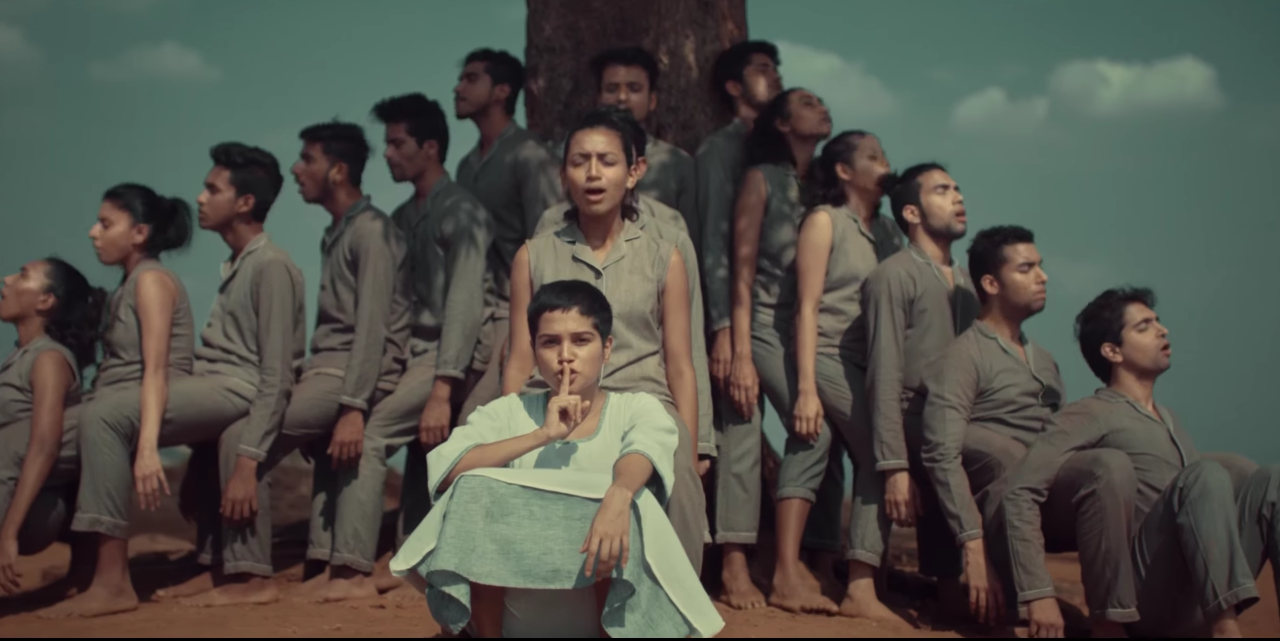 On the anniversary of Martin Luther King Jr’s (MLK) assassination, Pepsi saw fit to release an advertisement implying that the consumption of soda resolves some of the most pressing human rights issues of today.

The ad, which has been widely criticised and has since been retracted, features US reality television star and model Kendall Jenner, who abandons a photoshoot to not only join a large protest march, but to walk to the front of it and face the police officers who are staring down the protesters. Jenner then hands a can of Pepsi to a police officer, who drinks from it, causing the crowd of demonstrators to erupt in joyous applause.

Plenty of people of colour populate Pepsi’s ad, in a typically corporate, tokenistic nod to the idea of diversity, and two other people of colour – an Asian cellist and a Hijabi photographer — join the march too, but of course it is Jenner, the celebrity white woman, wielding her Pepsi, who is able to effortlessly and immediately lead it and who saves the day.

The advertisement has been lampooned and the negative feedback has reportedly left Jenner ‘traumatised’. Critics have pointed out the striking visual similarity between Jenner’s face off with the police officer and an iconic image of protester Ieshia Evans firmly standing her ground in front of two police officers in riot gear in Baton Rouge. 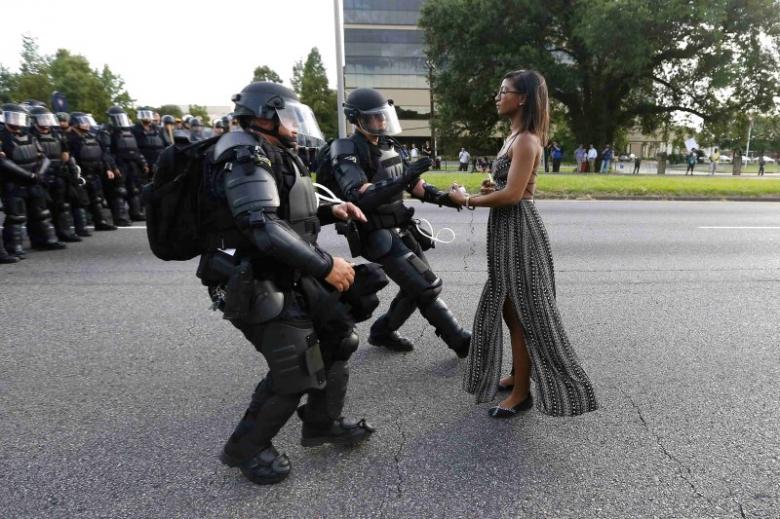 Evans was protesting the fatal shooting of Alton Sterling, a black man, by two white Baton Rouge police department officers. Evans was detained in prison for one night for the simple act of protesting, something one imagines Jenner would never have to endure in the breezy, airbrushed, pastel-coloured moral universe of the Pepsi ad.

Perhaps the most fitting response to the advertisement came from MLK’s youngest daughter, activist Bernice King, who said on Twitter: ‘If only Daddy would have known about the power of #Pepsi.’ The tweet is accompanied by an image of her father being physically pushed by white male police officers during a demonstration.

If only Daddy would have known about the power of #Pepsi. pic.twitter.com/FA6JPrY72V

Pepsi isn’t the first corporation to use the image of protest to hawk its wares, nor will it be the last. As Alex Holder points out in a piece in the Guardian, ‘They used to say sex sells; now, evidently, it’s activism.’ He argues that brands are not embracing social justice out of the goodness of their hearts, they are doing so because it is a good investment that promises good returns.

He points out, for example, that Unilever sells both Dove (which as Holder says has ‘smugly accepted fame for its portrayal of normal women in the Dove Campaign for Real Beauty’) and Axe, which upholds the very same patriarchal standards of beauty in its ads that the Dove campaign ostensibly fights.

But the problem is deeper – the very same corporations that benefit from a public championing of ‘good causes’ often brazenly continue to perpetrate human rights abuses in the course of their own work. The injustice that goes into the making of the product is then used to sell it.

Unilever, for example, dumped toxic mercury in Kodaikanal, and then refused to compensate its former workers whose health it had harmed. It is only after 15 years of diligent efforts by the workers and activists, and after a viral campaign that threatened to damage the company’s reputation, that it took its first steps to pay the workers. Efforts are still on to make the company clean at least some of the environmental damage it has caused in the town.

Another recent example of this kind of corporate posturing is an ad campaign by Tata Tea, which features an impassioned young woman reciting what Tata has called ‘the pre-activism anthem’. The ad was released in February as part of the company’s ongoing campaign. As a group of people theatrically snore behind her, she identifies four events that have not yet occurred – a bridge hasn’t yet fallen down, a farmer hasn’t yet committed suicide, an athlete hasn’t yet lost a match and a woman hasn’t yet been raped.

As morning breaks, and the alarm rings, she predicts that the sleeping figures will come alive, to read in the morning news that all four of these events have occurred while they were asleep. As we watch, the figures erupt in outrage – some take out a protest march, others sit in hunger strike, yet others chant slogans demanding justice. ‘But the alarm hasn’t rung yet,’ says the young woman, with a triumphant smile on her face, as the figures go back to sleep. She administers the coup de grâce by drinking from a mug full of – what else – Tata Tea, exhorting the viewer to ‘wake up’ before the alarm rings.

There are many things about this advertisement that open themselves to the same charges of tone deafness that the Pepsi video has been accused of. First of all, it randomly cherrypicks four complex social issues and reduces them into single events. But farmer suicide and sexual violence cannot be reduced to individual terrible instances; these are systemic problems that cannot so easily be divided into a ‘before’ and ‘after’.

Second, it completely discredits the work of activists, reducing it merely to the anger and despair that people express after certain injustices come to light. It implies that activism actually has very little social value, that it is a reaction to an action that cannot be undone. The robust and ongoing anti-caste, gender and labour movements in this country are testament to the falseness of this claim.

This is a caricature of what is, in fact, an expression of dissent, or a conversation about the world, which is central to the functioning of any democracy. It reduces people into either ‘talkers’ or ‘doers’, betraying a simplistic and morally righteous reading of issues that deserve much deeper reflection and engagement. At the same time, it lampoons those who are attempting to actually address these issues. Indian audiences will remember a similarly mean-spirited ad (by Pepsi, no less) that was released in the middle of a strike by FTII students, who were protesting the appointment of Gajendra Chauhan as the institute’s director.

Third, and most damningly, it ignores and avoids Tata’s own role in perpetuating grave human rights injustices. A closer examination of Tata Tea’s human rights record in its Assam tea plantations can shed some light on why the company dismisses, even attacks the work of activists.

Amalgamated Plantations Private Limited (APPL) – in which Tata Global Beverages has a 41% stake – is the second largest producer of tea in Assam. Over 155,000 people, the majority of whom are adivasis, live and work on its plantations. In 2009, The World Bank’s private sector arm, the International Finance Corporation (IFC), invested US $7.8 million for a 19.9% stake in the company.

Last November, the Compliance Advisor Ombudsman, an arm of the World Bank that holds the Bank accountable to its own policies, found that APPL had failed to uphold the fundamental rights of tea workers and their families on its plantations in Assam. This connects Tata Tea directly to a number of human rights violations that the report details.

The report not only found that workers were getting sick because of the poor quality of their drinking water, housing and sanitation, but also that pesticides were not being correctly used, exposing workers to very hazardous chemicals. Workers were found to be malnourished, receiving daily wages that were so low that they could not afford to buy nutritious food.

The APPL, the IFC and Tata Global Beverages all made separate statements responding to the findings of the report. In an email statement to the Thomson Reuters Foundation, Tata said, “Tata Global Beverages is committed to the fair and ethical treatment of people across its supply chain. As a concerned shareholder TGB continues to support the management of APPL towards improving the living and working conditions of workers.”

Stephen Lakra, the president of the All Adivasi Students Association of Assam, told The Wire that he found Tata’s advertisement to be “unacceptable, and nasty.”

“They say something and do something else. There is so much exploitation in Assam through Tata Tea… they claim that the workers and the company are equal partners in the venture, but they are no different from any other company. They pay low wages, schooling is not at all good, sanitation and housing are terrible, conditions are unhygienic. Whatever they may say in their ad, they are doing nothing of the sort in reality in Assam… we oppose their claims,” he added.