In the 22 assembly seats up for grab, the AIADMK and DMK are neck-and-neck by leading in 10 seats each.

New Delhi: The Dravida Munnetra Kazhagam (DMK)-Congress front will likely skate to victory in the 2019 Lok Sabha polls in Tamil Nadu, with voter trends put out by the Election Commission on Thursday afternoon indicating that the alliance could scoop up as many as 33 out of 39 seats.

According to polling data, the DMK is currently leading in 22 constituencies, while rival AIADMK has managed to secure a lead in only two seats.

The UPA’s gains are also throwing up bad news for the few BJP leaders in the state.

In Coimbatore, the saffron party’s CP Radhakrishnan is currently trailing the CPM’s P.R Natarajan by nearly 10,000 votes. In Tuticorin, the DMK’s Kanimozhi is handily beating the BJP’s Tamilisai Soundararajan by 40,000 votes so far.

In the Sivaganga constituency in South Tamil Nadu, the Congress’s Karti P Chidambaram is currently beating the BJP’s H. Raja by nearly 60,000 votes. 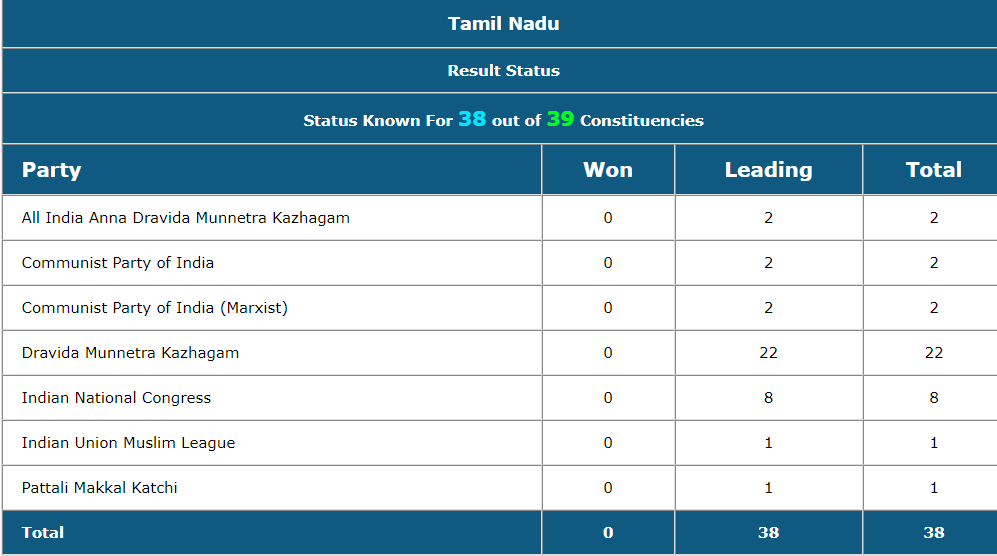 In the all-important by-elections, the DMK and AIADMK are still battling it out, with the parties leading in 14 and 8 seats respectively.

The AIADMK will need to win a minimum of 9 assembly seats to make sure its state government maintains a comfortable majority. Will EPS and OPS hold onto their government? The picture will be clear in the next few hours.

While national attention has focused on the Lok Sabha polls – and the resulting consequences for the prospects of the UPA and NDA groupings at the Centre – the Edappadi Palaniswami government also faces a battle on the assembly front.

Twenty-two state assembly seats went to elections earlier this year and are up for grabs. The AIADMK government currently has 113 members in the assembly, while the rival DMK-led alliance has 97 MLAs (including 8 from the Congress and one from IUML).

If the DMK alliance wins 21 out of 22 seats in the by-polls, it would be in a position to claim a majority of 118 in the 234-member assembly.

On the other hand, the Palaniswami government will consider itself truly safe only if it manages to win 10 seats – out of its 113-member majority, five of them have pledged loyalty to the rebel T.T.V. Dhinakaran faction. Dhinakaran is the nephew of Sasikala, Jayalaithaa’s close aide.

The state assembly stakes therefore add an extra layer of spice to the Lok Sabha polls.

As the 2019 general election results unfold, the backdrop to various macro electoral issues in the state – crippling effects of drought, the impact of GST and demonetisation and the farmer crisis – is that both the AIADMK and the DMK are missing iconic leaders who have led them to power in the past.

In 2014, the AIADMK won a resounding victory in the Lok Sabha elections, securing 38 out of 40 seats, while the DMK got only 23% of the vote share and failed to win a single seat.

The AIADMK’s victory was broadly credited to the goodwill that Jayalalithaa’s welfare measures earned amongst women voters.

In the 2016 assembly elections, the AIADMK bucked historical anti-incumbency trends and won 134 seats out of 235.  While it failed to win power, the DMK set the seeds for a comeback by winning 98 seats in the state assembly.

The problem for the AIADMK is that their political fortunes have been frittered away over the last three years.

Starting with the Jallikattu controversy – which fuelled tension before Jayalalithaa’s death in December 2016 – the state has seen a number of public protests over issues like NEET, the Sterlite imbroglio, the 8-lane Salem highway and the Pollachi sex scandal, the last of which allegedly has links to several AIADMK cadre.

It is unclear if the women voters who came out in large numbers in support of Jayalalithaa and her welfare measures will support the AIADMK this time. A high voter turnout this time – the final polling percentage was recorded at 73% – has analysts saying that a strong anti-incumbency factor may be at work.

The AIADMK’s uneasiness is reflected in the pre-poll alliance it has stitched up. While in 2014 it went to the Lok Sabha polls alone, this time around it has hosted a front that features the Bharatiya Janata Party (BJP), the Pattali Makkal Katchi (PMK, and a one-time critic of the AIADMK party), the Puthiya Neethi Katchi, the Desiya Murpokku Dravida Kazhagam and the Puthiya Thamizhagam.

The DMK’s alliance on the other hand consists of the Indian National Congress, the Viduthalai Chiruthaigal Katchi (VCK), CPI and CPM , MDMK, the Indhiya Jananayaga Katchi and the Kongunadu Makkal Desiya Katchi.

The Lok Sabha and assembly by-elections however will not be a walk in the park for MK Stalin, Karunanidhi’s son and current DMK president. While widely known, this will be Stalin’s first major election without his father.

Other lingering long-time negatives for the party include its dynastic history and corruption allegations as well as its often unreliable reliance on Congress and Left party candidates.