The saffron party's candidate from Hari Nagar in Delhi, he has been at the forefront of enflaming passions against minorities, abusing critics, and spreading fake news.

New Delhi: The latest member of the Bharatiya Janata Party to be rewarded for his bigotry is Tajinder Pal Singh Bagga, one of the spokespersons for the saffron party’s Delhi unit.

The 34-year-old, who is the BJP candidate from the Sikh-dominated Hari Nagar in the Delhi assembly polls, has been at the forefront of enflaming passions among Hindus against minorities, abusing critics, and spreading fake news.

According to his election affidavit, Bagga did not complete high school but has a diploma in “National Development Course” from National Defence University in China, PTI reports.

Day in and day out, one keeps hearing hateful statements from many among the right-wing. In most cases, they are rewarded: thus, a Naveen Dalal gets an election ticket for attempting to murder former JNU student Umar Khalid, or a Rupendra Rana, accused of killing Mohammad Akhlaq in the dastardly Dadri mob lynching case, contests parliamentary polls as a party nominee. Then there are a few like Shambhulal Regar who significantly raise their political value for getting themselves filmed killing and setting a Muslim man on fire.

Bagga’s political career, however, took off on slightly different lines. He first pushed himself into limelight in October 2011 when he and his friends entered eminent advocate Prashant Bhushan’s Supreme Court chambers and attacked him for his “radical” views on Kashmir.

Bagga denied playing a role merely on the basis that he was not seen anywhere in the video that showed people punching and slapping Bhushan and vandalising his office.

However, many eyewitnesses, including Bhushan himself, who had no clue about who Bagga was, vouched that he was the one who led the attack. Bagga was himself in a hurry to take credit for the assault, which he called “Operation Prashant Bhushan”.

“He try to break my Nation, i try to break his head. Hisab chukta. Congrats to all. operation Prashant Bhushan successful (sic),” he said, identifying himself as a member of one “Bhagat Singh Kranti Sena” which no one had heard of before.

Bagga led another campaign against “anti-national JNU” in 2016, soon after a few students were caught in the sedition row.

Bagga should be given due credit for sensing political opportunities. In 2011, when BJP’s campaign against so-called “anti-nationals” was at a nascent stage, Bagga exercised his “democratic right to protest” to disrupt Arundhati Roy’s book launch at the India Habitat Centre.

Old Memories with Arundhati Roy, whn she was Barking on Kashmir pic.twitter.com/dNA8vcl3zS

Exercising the same right, his outfit also defaced the Pakistani High Commission’s walls in Delhi with posters demanding freedom for Balochistan around the same time.

Such were his outfit’s outbursts that members of the Bhagat Singh Kranti Sena in 2012 targeted rights activist Swami Agnivesh after he defended a Visva-Bharati University hostel warden for forcing a student to drink her own urine as a punishment for bedwetting.

In 2015,  a year after Narendra Modi came to power at the Centre, Bagga started NaMo Patrika, a short-lived website to praise the prime minister.

It was around this time when the prime minister recognised Bagga as a social influencer and followed him on Twitter. In July 2015, Modi even hosted him at his official residence along with another 149 pro-right social media influencers in an event called #super150.

Although he posted communally polarising tweets almost on a daily basis, in the process accruing almost 6.5 lakh followers, his political utility was officially recognised only when the Delhi unit of BJP made him a spokesperson in 2017.

Since then, Bagga has not looked back. He, in fact, has found ways to make a profit from his politics of hate. He floated an e-commerce portal to sell a variety of goods, especially T-shirts celebrating human rights abuses by the Indian state – the most infamous being the one showing Kashmir artisan Farooq Ahmed Dar tied to an army jeep as a human shield. Dar was returning from voting in a by-poll when Major Leetul Gogoi tied him to the front of his jeep as a shield against stone-pelters. 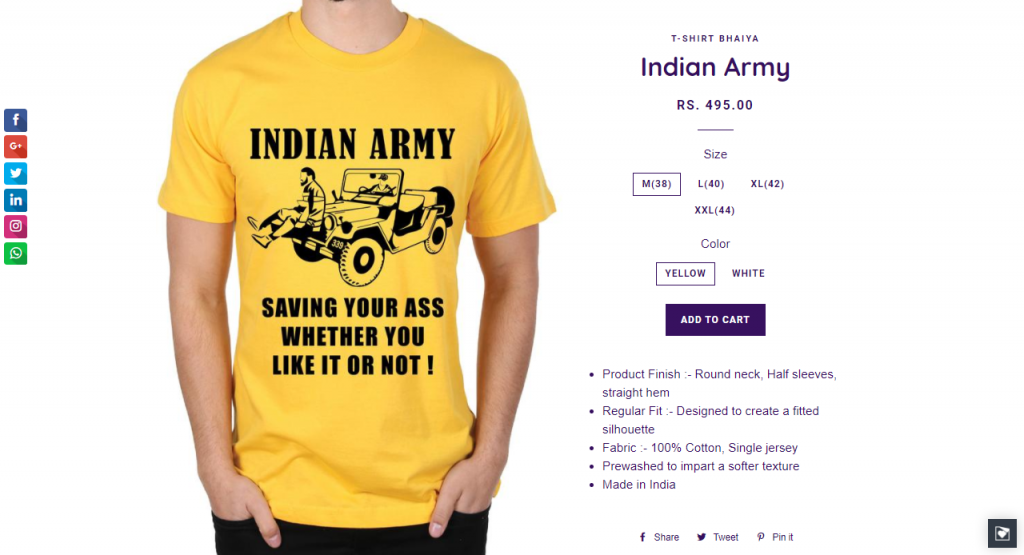 Screenshot of the page selling the T-shirt.

Amidst attacks from civil society, Bagga remained defiant and defended his merchandise as “a tribute to the army officer’s heroic act”.

Known for often posting fake news on his social media handles, his most recent one was when he posted a video claiming, “Muslim and Leftists students” rasied the slogan “Hinduo se Aazadi” (Freedom from Hindus) at an anti-Citizenship Amendment Act protest.  The video was soon proved to be doctored by the fake news busting website Alt News.

At a different time and age, the likes of Bagga would have had no chance in politics. However, Bagga’s persistent efforts to further harden BJP’s Hindutva stance and his ‘success’ as a Twitter ‘troll’ earned him an election ticket. The BJP had earlier rewarded terror-accused Pragya Singh Thakur in the parliamentary polls with an election ticket.

By nominating Bagga, the saffron party, which often pats itself for its hardline positions, has sent a clear signal to party workers that rising through the ranks in the Narendra Modi-led party does not depend on ground work alone.

It may be unfair to strip Bagga of the credit he deserves for making social media bigotry a viable career choice. But his electoral nomination will still be buried under a new chapter in the BJP that honours the ‘fringe’.