His arrival on the political scene as an articulate Muslim leader was no ordinary event in the journey of the Indian republic. 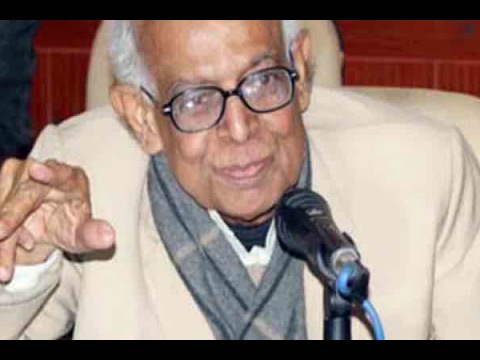 Writing an obituary of the writer, diplomat and politician Syed Shahabuddin is actually an exercise in writing of the journey of Muslims in the Indian republic. The much maligned gentleman was somebody who could never be ignored. As a very bright student of physics in the academically brighter phase of Patna University in the first decade of India’s independence, he drew the attention of his teachers. The memoirs of his professors, Mohsin and Kalimuddin Ahmad, describe Shahabuddin’s promise in glowing terms. Soon thereafter, he became known for the leadership he provided to a student movement in 1955, including leading a 20,000-person march to wave black flags against Jawaharlal Nehru when he visited Patna – in protest against police firing on students.

He managed to get a job as a lecturer at the same time as qualifying for the civil services in 1957. He ranked second among all the aspirants, with a particularly high score in the interview section, and joined the Indian Foreign Service. Many delicious legends were fabricated around the kind of questions he was asked and his witty responses. His success not only inspired many students, but also helped overcome the trepidation among Muslims about their place in India after Partition.

While a section of Hindus looked upon Muslims as potential fifth columnists, a section of Muslims was also not very confident of the inclusionary-pluralist democracy that was being built up under Nehru. Notably, even as a student, Shahabuddin too was contributing towards this task of nation-building. With some ‘socialist’ leanings, though not formally with any party, his activism allowed certain critiques of the Nehruvian consensus to be heard.

He paid a price for this activism, though a minor one. Owing to Shahabuddin’s involvement in the student agitation of 1955, he had to wait for police/intelligence clearance and therefore could join the services a little later than his other batchmates. Legend has it that Nehru himself finally cleared the file.

In the late 1970s, the hegemony of the ruling Congress came be challenged by the socialists, Shahabuddin became restless within the confines of bureaucracy. He decided to quit government service and join politics.

Until then, Indian politics lacked a pan-Indian Muslim leader with well informed and articulate views. Although Maulana Azad had occupied an important position, he was part of the Nehruvian consensus and did not challenge it. Nor were academics looking at the worrying economic and educational locations of Muslim communities and their disproportionately inadequate share in the structures and processes of power. A few exceptions existed, such as the volume on castes among Muslims edited by Imtiaz Ahmad in the late 1960s and the works of Uma Kaura and Mushirul Hasan looking at the marginalisation of Muslims by the Congress under majoritarian pressures in 1970s, but these were rare.

None of the important dissenting voices in Indian democracy, whether Ram Manohar Lohia (1910-67), the defender of the lower castes, Jai Prakash Narayan (1902-79) nor the Left were paying attention to this issue.

Shahabuddin saw this vacuum in Indian politics and adventurously jumped in to fill it. His arrival on the scene as an articulate Muslim politician was no ordinary event in the journey of the Indian republic. As he stormed in, with his enviable articulation and abilities invoking constitutional values and spirit, he was almost matchless. He could not be dismissed, but he could be maligned as a sectarian, conservative and even communal reactionary. Often, he gave his critics grounds to do so. His stand on the gender issue in the Shah Bano case, where he stood on the side of the clerics, and on free speech, by asking for Salman Rushdie’s Satanic Verses to be banned are particularly problematic as the repercussions continue to play out today. On the issue of caste among India’s Muslims too, he was dismissive of pasmanda activists, although unlike many ‘reactionary’ Ashraaf, he never denied the reality of caste-based oppression and discrimination in Indian Islam.

His critics had little time for complexities and he was frequently clubbed with people like Maulana Bukhari, the Shahi Imam of Jama Masjid in Delhi, despite there being little to compare the two in either democratic legitimacy or point of view.

Throughout the 1980s and ’90s, Shahabuddin, through his English monthly, Muslim India, a journal of “Research, Reference and Documentation”, kept articulating and disseminating the concrete (as well as emotive) issues of concern to Indian Muslims, besides contributing  extremely powerful, informed and passionate editorials. Putting together news reports and views from across periodicals, the magazine also carried parliamentary speeches, interventions, government reports, book reviews, personality profiles and statistical data demonstrating the under-representation of Muslims in various sectors of the economy and employment, and many other crucial areas. This was done with candid, coherent, persuasive prose, laced with facts and figures, and at times beautified with apt Urdu couplets.

The title of the monthly he had chosen turned out to be provocative, as this expression is said to have been used in certain documents of the Muslim League in late colonial India. But the sharp (and cunning, if I may say) mind of Shahabuddin had a very strong defence in the English grammar. He explained that in the expression ‘Muslim India’, the former is  an adjective and the latter a noun. Thus, ‘Muslim India’ would grammatically put emphasis on the Indian identity of someone just happening to be Muslim. It was more patriotic than the expression ‘Indian Muslims’, wherein more emphasis was on Muslim (who happened to be Indian). Hence, he preferred ‘Muslim Indian’ to ‘Indian Muslim’.

Besides making interventions in a range of journalistic and academic periodicals, including even the ‘provocative’ English monthly, Debonair, Shahabuddin’s Muslim India carried very powerful editorials on almost every issue which touched the Muslim segment of Indian democracy. Nobody before and after him could muster that much of courage, conviction, energy and determination to do all these, that too all alone. Yet, he found enough time to reply to all the letters he received. He religiously wrote and dispatched letters.

The editorials that had particular impact are worth recalling. In July 1994, he wrote on Lalu Prasad Yadav’s brazen Yadavisation in Bihar at the expense of his core and unflinching support base – Muslims. The argument was well made, even by the standards of Shahabuddin’s characteristic articulation, with so much data damning the Lalu regime on almost every aspect of governance. Predictably, soon after, he left the Janata Dal. In July 2000, he published another editorial on the problems of governance at the Aligarh Muslim University (AMU) and their possible remedies. This was meant as advice from a senior IFS officer to a junior one, Hamid Ansari, who had joined as the vice chancellor of AMU. Yet another important editorial was on the 1988 Act making Jamia Millia Islamia (JMI) a central university. He called the Act a “swansong” for JMI. He later expanded this editorial and wrote a long essay, ‘How to revive the spirit of Jamia Millia’, in the Milli Gazette in 2010. Focussing on the AMU Act 1981, the lawyer in him kept arguing that the legislated Act did not provide AMU with minority status, though it did have minority character.

In the final years of his life, many of his projects remained unfinished. The tragic and mysterious murder of his only son Parwez (an IIT alumnus and a promising scientist) in the US in 2005 had perhaps broken him from within, even though he did carry on with his life as bravely as ever. He never got around to finishing it but the title he chose for his autobiography was Muslim Heart, Indian Mind. Perhaps that is the best way to remember him by.

Mohammad Sajjad is an associate professor at the Centre of Advanced Study in History at Aligarh Muslim University and the author of Muslim Politics in Bihar: Changing Contours.