Who After Geelani? Questions Over Leadership Have Opened Pandora's Box for Hurriyat

Syed Ali Shah Geelani's resignation from the APHC was reportedly 'long overdue'. Yet there are few who can take his position now. 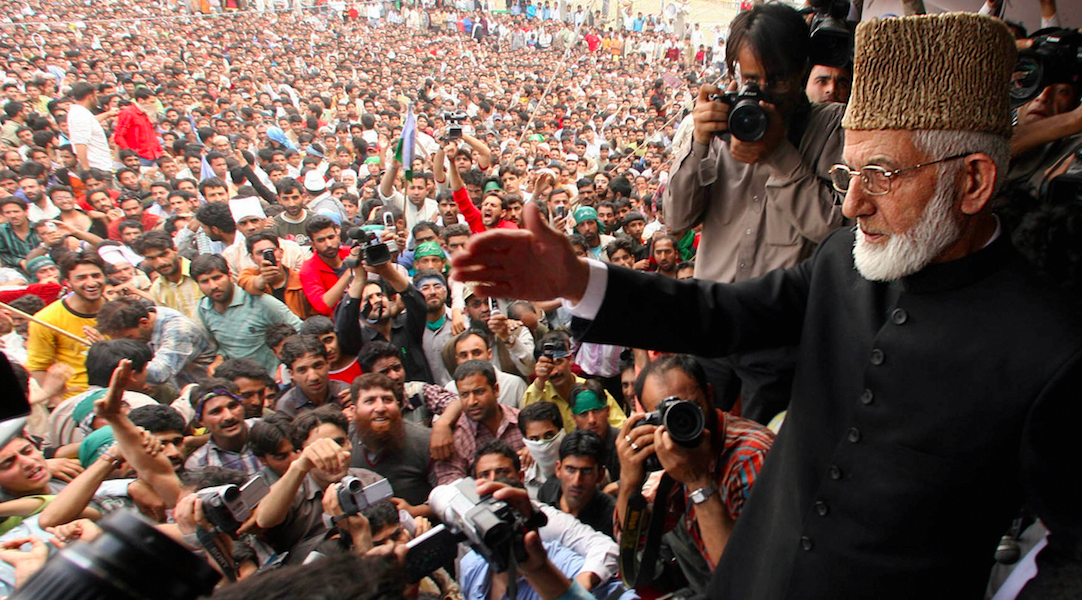 In this photo from 2008, Syed Ali Shah Geelani waves at a crowd in Srinagar. Photo: PTI

Srinagar: Even though the decision of seniormost separatist leader Syed Ali Shah Geelani to part ways with the All Parties Hurriyat Conference might have come as a surprise to many, if sources are to be believed, the decision was “long overdue”.

Sources from the Hurriyat Conference – an amalgam of over two dozen social, political and religious organisations – told The Wire that the septuagenarian leader had made up his mind last summer. The decision to quit was largely due to his deteriorating health but was also quickened by his growing displeasure with the party’s mode of functioning.

“It was long overdue. Many members of the party were expecting this sooner or later. Geelani sahib had serious differences with the party’s functioning and moreover, he had developed symptoms of dementia,” a source said.

Geelani, in a detailed two-page resignation letter to all Hurriyat Conference members also mentioned this.

Geelani wrote that while he had tried his best to contact unarrested members of the Hurriyat Conference while he was in house arrest after August 5, “no one responded.”

“Now that today you have felt the heat of being questioned, that the veil is slipping off your financial irregularities, and you fear to lose your chairs, you have started to convene meetings and support an unconstitutional decision thereby setting a strange example of unity,” Geelani said in the letter.

“In 2003, you people forced me to take up the leadership of APHC and wanted me to remain its lifelong Chairman. The performance and mismanagement of this forum were repeatedly ignored by dubbing them as ‘acts in the larger interest of the movement’. The pressure by government authorities, persistent arrests, financial issues, and personal weaknesses, never allowed us to set up a strict system of accountability in APHC. But now you are not just crossing boundaries, you are announcing an open rebellion against the (APHC) leadership.”

“Keeping in view the current situation, I announce my complete distancing from the APHC, ” he said.

Geelani said that he cannot be held answerable for the performance of the members of this forum.

“You people are free to decide for yourselves. Old age and physical weakness have neither dented my spirit nor my mental capabilities. Till I die, I will always remain steadfast against the ‘Indian occupation’ and will continue to guide my people,” he said.

Back in the summer of 2019, High Court Bar Association (HCBA) president Mian Abdul Qayoom was considered the strongest candidate to take over the reins from Geelani.

However, Qayoom was arrested on August 5 after India revoked the special status of Jammu and Kashmir.

Sources said authorities might have got a tip that Qayoom may join the Hurriyat camp and that this could ultimately have led to his arrest.

On May 28, the Jammu and Kashmir high court, while dismissing the petition challenging the detention of Qayoom under the Public Safety Act (PSA) had asked him to “shun separatist ideology or stay incarcerated”.

The bench said Qayoom’s “separatist ideology” was “pertinent and proximate,” and could instigate youth in Kashmir.

The other name which was strongly backed by the APHC members to lead the amalgam was that of the flamboyant Masrat Alam. Alam’s continuous detention led the idea to be dropped.

Alam, who is the chairman of the Jammu Kashmir Muslim League was detained on April 17, 2015 on charges of sedition and “waging war against India”, after he hoisted a Pakistani flag and chanted “anti-national slogans” during a rally organised for Geelani.

With both in detention, focus then turned towards Hurriyat (G) Conference general secretary G.N. Sumji, and Tehreek-e-Hurriyat (TeH) chairman Ashraf Sehrai.

However, sources said that Sehrai and Geelani, who were once close friends had not been in talking terms for the past one year or so.

“Both the leaders were operating from separate rooms in the same building. They had even stopped meeting each other,” they said.

With Sehrai son’s Junaid Ashraf Sehrai “sacrificing” himself for the “Kashmir cause” has created sympathy and respect for him in the party ranks.

“Sehrai has now emerged as the strongest candidate to succeed Geelani. But it all depends on whether the rest of the APHC members will accept Geelani’s resignation,” they said.

Junaid, who had joined Hizbul Mujahideen, was killed on the morning of May 21 after a 15-hour-long gun battle with forces in a densely populated area in downtown Srinagar.

Meanwhile, Geelani in a letter said that he “would continue to remain as representative to PaK and other countries.”

“I am thankful to those people who helped me take an important decision at the fag end of my life. If I have committed any mistakes, or hurt anyone by my words or deeds, I request for your forgiveness,” he concluded.