Surrounded By Violence But Not Brought Down By It: A Firsthand Account of Ramjas Protests

Left 'shellshocked' by the violence perpetuated by ABVP goons, a current Ramjas student says labelling the clashes 'Left vs Right' is inaccurate and misrepresents the students' intentions. 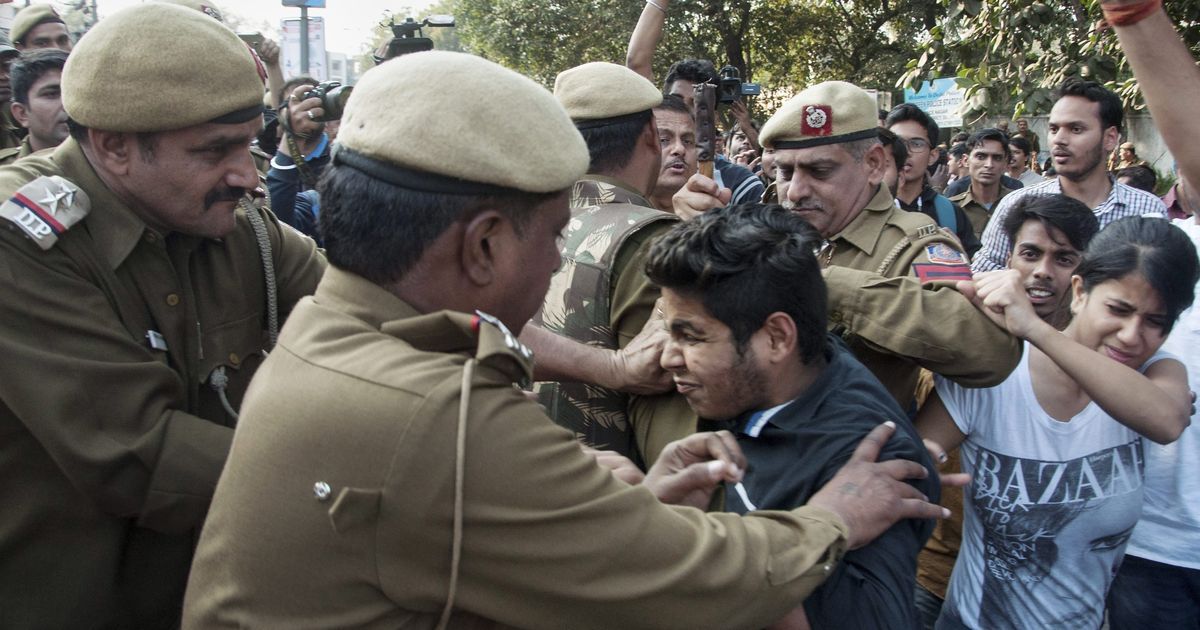 Yesterday I was witness to a brutal attack on our democratic right to freedom of expression. The attackers tried to silence protesting voices through violence, and although we were surrounded by it, we were not brought down by it.

These words sum up the second day of protests which took place in and around Ramjas College on Wednesday. These events were the first time I’d witnessed such a thing in my entire time at this college – and they have left me and my peers shellshocked. This is not only an attack on our bodies, but also on our minds. This was an attempt to quell our ability to think.

February 22 was supposed to witness a peaceful march in response to the protests that led to the cancellation of Umar Khalid’s appearance at a seminar being hosted by a few Ramjas college students. The primary challenge to his appearance was that his academic credentials were not adequate enough for his inclusion on the panel he was invited to, that somehow he was not qualified to speak about a subject Khalid is writing his Ph.D on. If that wasn’t enough, the slogans against him were along the lines of ‘Vande Mataram’ and ‘Bharat Mata ki jai’ – hardly challenges to his academic credentials. Umar Khalid has, of course, been challenged for his views on Kashmir, but he wasn’t even supposed to speak on that subject. The protest was followed by clashes which resulted in a number of students being injured and the seminar eventually being called off for the day.

Outside the gates, mayhem ensued

Wednesday’s march was supposed to start from the gates of the college and end at the nearby Maurice Nagar police station, where participants planned to register an FIR against the people who had protested against Khalid. However, ABVP and DUSU had other plans. Members from the groups collected and tried to surround the marching students from both sides of the road right outside the college gates in an attempt to prevent the march from even beginning.

Meanwhile, students inside the college who were supposed to join the march also found themselves encircled by goons and treated to vile sloganeering coupled with violence – which eventually resulted in a broken nose for a friend and several injuries for other protestors. Chaos ensued. with students stranded both inside and outside Ramjas’s premises. Even sitting inside the college, it was frightening to see and hear about what was going on outside the gates as the goons threw stones, eggs, bricks and other objects while the protestors shouted slogans against the aggressors.

As the clash escalated, members from the leftist AISA, the feminist Pinjra Tod movement and other organisations also joined the marchers. Even though students of various political persuasions participating in the protest, certain media houses chose to label the clashes as ‘AISA vs ABVP’ or ‘Left vs Right’ fight.  These labels do not accurately represent what happened. Many participants just came to express their disbelief at the injustice meted out to Khalid and to stand in solidarity with Ramjas college.

Baying for blood, the goons beat whoever they could get a hold of – professors, students and journalists alike.

Inside the gates, they attempted to disrupt our sit-in

Things looked different inside the gates as a group of students – who had been victimised by the ABVP in a different round of violence the day before – organised a sit-in, with a few others joining and lending their strength to the cause. The sit-in was organised to express non-violent opposition to the kind of violence that the ABVP has made a habit of perpetuating against people it disagrees with. But the form of protest ended up taking place in a context in which we, the participating students, were cornered from all sides, unable to leave the college unless we wanted to be beaten up as well.

Sitting there, it was easy to see reflections of JNU’s Freedom Square in the Ramjas canteen, albeit on a much smaller scale. Away from the media’s attention and the violent clashes, we now sat holed up in our own college, “protected” by the police. Stranded for hours and frustrated by our resolve to stay non-violent, the goons eventually found a way into the college, looking to create more mayhem. Two students just behind me were beaten up, but we did not let this provoke us into violence and stuck to our resolve. It was a mind-numbing experience to witness this and be a part of it. People that I’d seen in college every day, including members of the Ramjas student union, were now accusing us of being “outsiders” from JNU who were trying to harm Ramjas’s image. They waved the tricolour in our faces, chanting ‘Bharat mata ki jai’ and told us to get out of the country, labelling us traitors.

The anger in their eyes was palpable. It was clear that they wouldn’t think twice about beating us up. As they tried to break any cameras we had, they didn’t even hesitate to attack our professors – throwing a chair at one at one point. I could feel the fear, but the moment called for us to resist, not flee. However, the police’s inability to control the situation eventually led to us being escroted out of the college. But not before another friend had become a victim of these self-proclaimed vanguards of nationalism. There was just no scope for engagement. They didn’t want to talk, pulling back any member of their hoard who even tried.

As we were escorted out of the college and put into police buses that would take us to metro stations so we could get home, we started hearing rumours of more violence. Reports of people being beaten up in the college hostel followed, along with plans for ‘witch hunts’ to drag protestors from their paying guest residences and flats.

In yesterday’s aftermath, the protest is reaching larger spaces, with students from more colleges joining in. This is the kind of response we need to mindless violence. Ramjas remains the same campus which gave me hope at one point of time. It does scare me because the aggressors now know my face – all our faces. But this is a time to fight and not give into this fear. It’s time to protect the spaces that we consider sacrosanct, and keep them free of violence and intimidation.

The author’s name has been changed to protect his identity. The author is currently a student at Ramjas College, Delhi University.