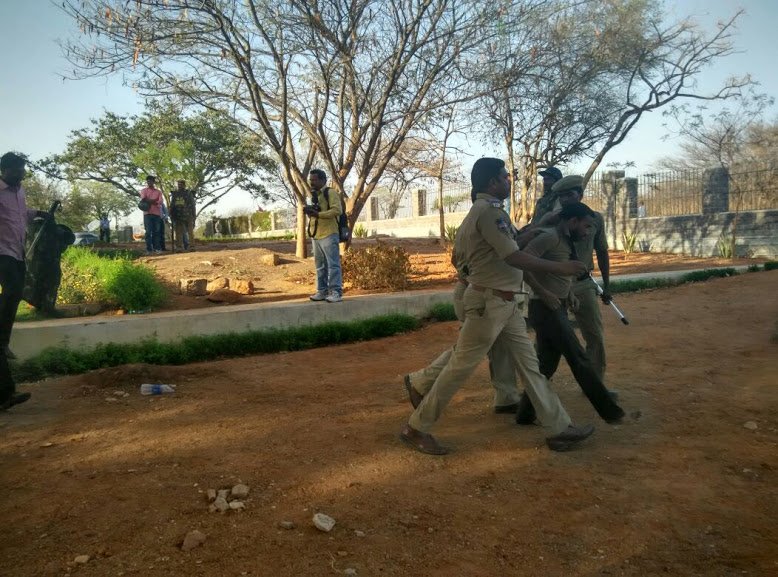 More than two months after he went on leave following Rohith Vemula’s suicide on campus, Hyderabad Central University vice chancellor Appa Rao Podile resumed office in the teeth of violent protests by students who blamed him for the ‘institutional killing’ of the Dalit research scholar.

According to PTI, students allegedly ransacked the VC’s lodge on learning that he was holding a press conference to announce his return. Widow panes, doors and a television set were broken during the protests. Students raised slogans against the VC blaming him for Vemula’s death, and demanded his immediate arrest. The police presence on campus was high as tensions grew.

An ANI report also claimed that the VC’s office had been vandalised by the students.

While Podile’s scheduled press conference was cancelled because of the protests, the university website announced that the VC has resumed charge. The VC told PTI that the “gross violence” shown by the students was “unfortunate for the education system”. “Students must know the democratic way of representing their issues”, he added.

In a press statement, the Students’ Federation of India called the VC’s return “shameless”, as Podile was “directly involved in the ‘institutional murder’ of Rohith Vemula”. This move, they claim, shows a lack of sensitivity on the part of the Modi government.

Podile went on leave on January 24 due to heightened student protests against him, in order to to “facilitate talks with protesting students”. While going on leave, he had said: “I cannot say at this moment how many days I will be on leave. I have decided to be on leave till normalcy is restored. I have been in touch with the faculty and likeminded organisations to enable talks”.

Protests against Podile started when PhD scholar Rohith Vemula committed suicide at the university campus on 17 January. He was one of the five Dalit students of the Ambedkar Students’ Association who had been suspended from the hostel facility by the executive council of the university after a clash with members of the ABVP. Vemula’s friends, family and supporters have time and again brought up the role of union ministers Bandaru Dattatreya and Smriti Irani in the campaign against Vemula and his colleagues. Irani has continuously denied having any role in the matter other than performing her duties, including in parliament.

A case of abetment of suicide has been registered against Podile, Dattatreya and two others.