Students are concerned that their rights are being violated. They fear that they are being used as scapegoats to provide fodder for Islamophobic propaganda. 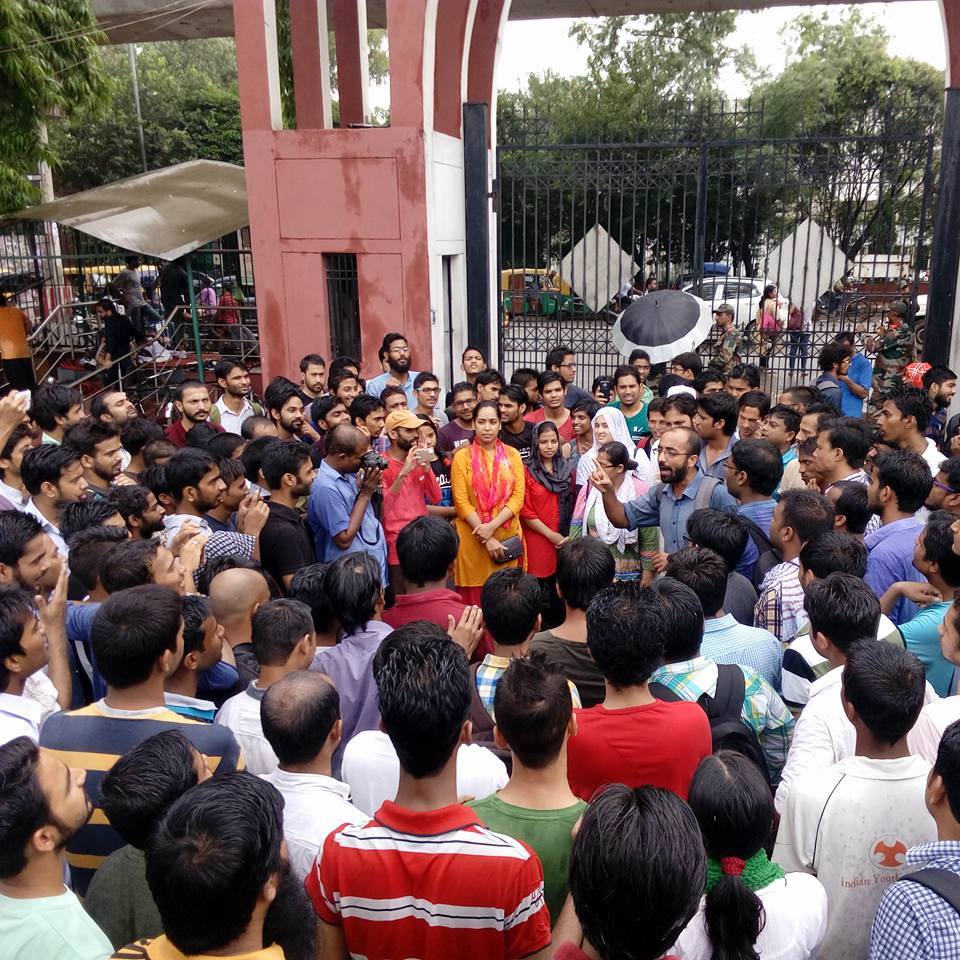 Students continue to protest at the gates of the university./Facebook

In a statement, detailing the sequence of events on August 13, the students have demanded the “suspension of administrative officials who failed to stop the police from entering the university premises.” They have also cautioned the university not to take any “action like show cause notice against the students participating in the ongoing protest in any implicit or explicit manner”.

They have also demanded that the university administration immediately organise a press conference “stating clearly whether they gave the permission to Delhi police/intelligence agencies (to enter the premises) and, if yes, on what basis?”

The sequence of events, sent by Idrish Mohammed, stated that “just two days before independence day, all the hostel residents were informed personally by the administrative authorities to be careful as there may be some raid by the IB or CBI or Delhi police. Students were instructed not to keep any non-resident student in the hostel.”

The statement further said that, what was “problematic” was the atmosphere of fear that the incident created among students. “Many of the students were told to be careful regarding ‘Kashmiri students’ in particular.”

Thereafter, the statement said, at around 3 pm on August 13, “two police constables in uniform and around 15-20 officials in plain clothes were seen sitting just outside the hostel gate. Two constables came inside the gate and started having a conversation with the guards, while around 10 officials were sitting in their cars inside the hostel campus.” Poster announcing the second day of protest against the police raid./ Facebook

It said that when the students asked the constables the reason for their presence, they said they had been on campus for a long time. The students also went to the cars and asked the police personnel in plain clothes why they were  there.

The police had reportedly claimed that they were given permission by the university proctor to enter the university premises. “Then the proctor was called and he entered the campus premises from the hostel campus where many students were allegedly asked questions by the police and a few rooms were checked. The police clicked pictures and also recorded videos.”

When the students questioned Proctor Mehta Alam, and the two provosts, Haroon Sajjad and Iqtidar Mohd. Khan, about the developments, “the Proctor initially denied having granted any permission. But then he told us that the police officials were only given permission to stand outside Gate No. 4” which is the first entry gate towards the boys hostel from the main road.

The students said that on learning that the police had transgressed its authority, they sought an unconditional apology from them. But the university administration stepped in and helped the police “in leaving quietly, without explaining their overreach and unwarranted presence to the students”.

Following the incident and on hearing about the ‘unauthorised raids’, the university students had gathered in large numbers at the university main gate and held a prolonged protest. Students continue to protest at the gates of the university./Facebook

“It is shocking that campus autonomy is being trampled upon in this manner,” said the students.

Raising questions on the role of the university administration, the students said, “The dean of student’s welfare (DSW) had recently issued a notice stating that ‘no raid was conducted by the Intelligence Bureau/Delhi police in the boys’ residence hall on August 13’, but the very next paragraph, on the contrary, states that, ‘four Delhi police personnel in plain clothes entered the university without his [Proctor’s] permission’.”

Demanding that the ‘core issue’ be not subsumed in “technicalities of terminology”, the students have stated, “For us, it was a raid, a breach of our autonomy and dignity, and that is what has pushed us into this outrage.”

Seeking an enquiry into the whole matter, they said, “It’s shameful that the administration allowed the police to enter the university premises without properly asking for the grounds for such a visit. We believe that, as bona fide students of Jamia, we are entitled to security and the responsibility for the same lies with the university administration.”

The students also said that “the responsibility of the Jamia administration is to ensure that no Jamia student is turned into fodder for Islamophobic propaganda, ahead of crucial junctures such as independence day …. We students can’t be kept under constant surveillance and made scapegoats for anti-minority propaganda.”

The vice-chancellor of the university, Talat Ahmad, however, claimed that the police had not entered any of the hostels and that two or three students were unnecessarily raking up the issue. He told the Indian Express that “police did not enter any hostel. They only entered the area within the campus which is open to all, for which you don’t need any permission. How can we stop them from going there? But two-three students, who want to be leaders, are unnecessarily creating an issue. The university wrote to police because something had to be done in response to the students’ demands. I will… assess the situation.”