A Year of Jai Bheem and Laal Salaam: Student Resistance in 2016

2016 will be remembered in history as a year of unprecedented student uprisings across universities – asking uncomfortable questions and challenging the establishment. 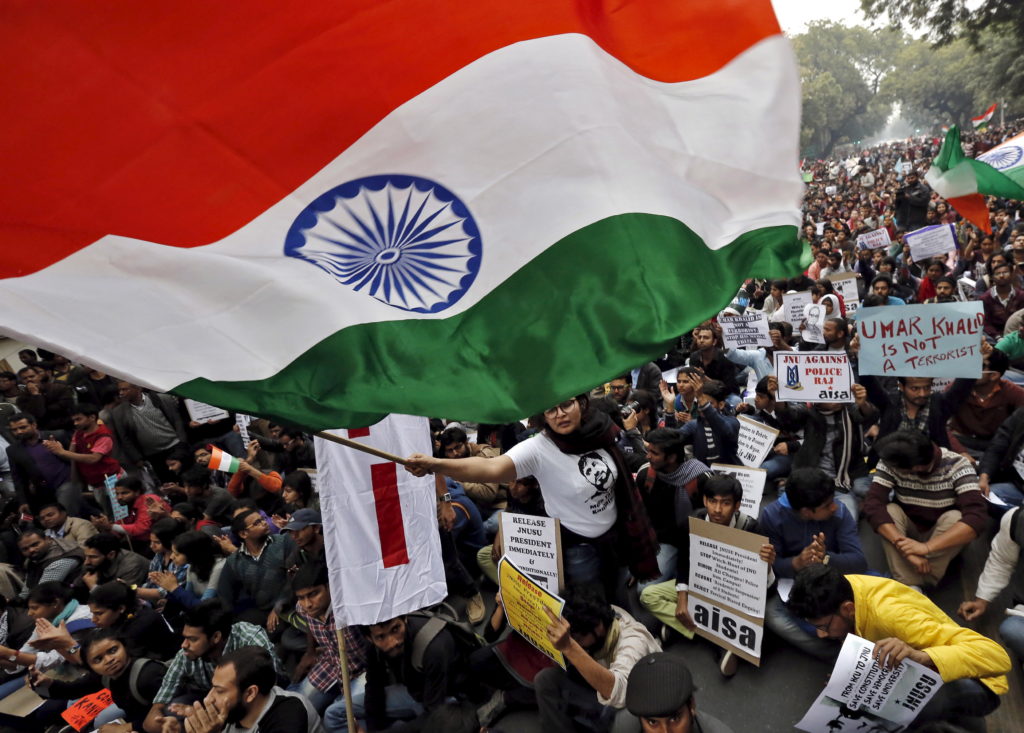 Would it be wrong to liken the whole of 2016 – a year of many political and economic upheavals otherwise – to the spring of 1968’s France? Perhaps, yes – it may sound like an exaggeration. Neither did it usher in commensurate cultural avant-gardism, nor like France, did it spur mass protests that would significantly transform the moral compass of the nation.

Yet, the Indian 2016 was marked more by similarities to the 1968’s French spring than differences. It became the year when students across universities joined hands against the political establishment, united to question the status quo and challenged the narrow definitions of nationalism that the Indian government is trying to permeate.

Quite like the civil unrest against the Gaullist administration, students spilled over to streets to agitate and bonded with workers and underprivileged masses like never before in Indian history. Slogans of azaadi or freedom – against fascism, casteism, capitalism, feudalism, consumerism, hunger and all forms of inequalities – echoed in the air. In that revolutionary spirit, the student’s movement bloomed out of the clutches of the often-limiting partisan politics.

Despite different – and sometimes conflicting voices – their struggles unnerved the establishment and elicited immature and often-authoritarian responses from the government. Leaving aside more pertinent governance issues, the government made students and universities its sole focus for a good number of months. It polarised the political environment by branding students and universities ‘anti-national’, betraying its complete ignorance about educational spaces and processes.

To mark his disdain for student politics, Kiren Rijiju, the minister of state for home affairs – who is now tainted for his involvement in the 450-crore hydro-electric scam in his home state Arunachal Pradesh – was famously quoted as saying, “Some students come to JNU only to play politics, not study.”

2016 was the only year in Indian history – except the emergency period – when the government thought of students as powerful enough to be a constant threat.

The letter that changed it all

“My birth is my fatal accident,” wrote Rohith Vemula in his suicide note. “The value of a man was reduced to his immediate identity and nearest possibility. To a vote. To a number. To a thing. Never was a man treated as a mind.”

On January 17, 2016, Vemula, a young Dalit scholar and an aspiring science writer at the Hyderabad Central University (HCU), technically killed himself after having been suspended from the varsity for raising his voice against issues such as capital punishment, communalism and rampant casteism. With his monthly stipend stopped and his hostel room taken away, Vemula could bear no more.

“May be I was wrong, all the while, in understanding world. In understanding love, pain, life, death. There was no urgency. But I always was rushing. Desperate to start a life. All the while, some people, for them, life itself is curse… Let my funeral be silent and smooth. Behave like I just appeared and gone. Do not shed tears for me. Know that I am happy dead than being alive. From shadows to the stars,” he penned down before he died.

His funeral was never meant to be silent though. His death, which most of his friends saw as an ‘institutional murder’ became the clarion call for a students’ movement across all Indian universities that was not to die so soon.

It sparked a movement against the government, university authorities and ABVP who had all conspired to strip Vemula of his scholarship. His death came as a stark reminder of how the Sangh parivar-backed ABVP wrote several letters to BJP’s political representatives about ‘anti-national’ activities (a reference to agitations against the capital punishment of Yakub Menon, a convicted terrorist and the ABVP’s attack on the screening of the anti-communalism documentary Muzaffarnagar Baaqi hai) practiced by Vemula’s organisation the Ambedkar Students Association.

What had been a silent protest against the suspensions until then, became a united and full-fledged struggle of students who questioned the then union HRD minister Smriti Irani’s promptness in asking the university authorities to institute an inquiry committee on the basis of the ABVP’s complaint. The committee’s report eventually led to the suspension of Vemula and his four comrades, triggering a long battle with the university administration.

Students began to see direct linkages between the government in Delhi and the ABVP unit in HCU. University protests shaming the government for doling out death penalties or making communal remarks were nothing new, but the BJP-led government involving itself with university’s internal matters was an unprecedented sight.

Above all, students were reminded of the all-pervasive casteism that existed in campuses and which later became the foundation stone for the students’ movement through the year. Thousands of students across India marched to protest against the criminal high-handedness of the government and to keep the fire lit by Vemula’s death alive.

Students who had begun protesting against extensive budget cuts in higher education – which had crystallised into a vibrant three-month long Occupy UGC movement last year – intensified despite several crackdowns planned by the government.

The student consolidation after Vemula’s death created a political storm in the country. Opposition parties rallied behind the students forcing the government to answer uncomfortable questions. Dalit and Left intellectuals raised a hue and cry over government’s high-handedness in the matter, transforming Vemula’s death into a high-decibel political debate about the saffronisation of educational institutions under the current government and its Brahminical attitude towards the prevalent discriminatory practices in India. Such was the furore, that Irani and Bahujan Samaj Party’ Mayawati had an epic melodramatic spat in parliament.

The ‘seditious’ call for azaadi

Amidst this deepening student’s movement, the government, now caught in a quagmire, tried to reorient the political debate by perpetuating a claustrophobic definition of nationalism – one which was close to any form of criticism and accommodation. Yet again, it chose to target a few leftist students of Jawaharlal Nehru University who had dared to speak against capital punishment and the state’s autocracy at a cultural event in the month of February. JNU student’s union president, Kanhaiya Kumar was arrested and so were two others  – Umar Khalid and Anirban Bhattacharya  – on charges of sedition.

Since ‘Justice for Vemula’ was primarily an Ambedkarite movement, the government cleverly intended to capitalise on the fault lines between Marxist and Ambedkarite student groups and dividing the students’ unrest by targeting leftist students. But little did it know that its high-handed action would give birth to a leader who would directly take on the government. The chain of events that followed transformed Kumar from a student leader into the voice of millions who were critical of the current dispensation.

His slogans of azaadi became the most powerful political chant in recent times. The spark that Vemula lit was fanned by the intense struggles that universities led against the arrests of JNU students through most of 2016.

The administrative block in JNU was rechristened ‘freedom square’ where politicians, intellectuals, activists of all hues addressed the students  – redefining and broadening the definitions of nationalism. “Bharat se azaadi nahin, Bharat mein azaadi (Freedom in India, Not from India)”, as Kanhaiya had stated, became central to the persistent student movements.

Several universities  – both in India and abroad – extended their unequivocal support to the #standwithjnu campaign. Teachers who liked to remain in the background came forward in support.  The academic community – comprising teachers, students and staff  – came together all over again.

Despite several organised efforts by the BJP machinery to discount azaadi as seditious and polarise the debate in its favour through vicious, misleading online and offline campaigns against students the academic community led a valiant battle against the state and in the process, re-invented the meaning of the word ‘freedom’.

The government was forced to transfer the theatrical Smriti Irani, who received a lot of flak during this whole period, from the significant HRD ministry to the low profile textile ministry in an attempt to minimise the damage.

Such was the historical importance of the #standwithjnu campaign that despite all the differences, the Ambedkarite slogan Jai Bheem and the Marxist parallel Lal Salaam began to be chanted together – an epochal moment that none of the political parties had ever imagined, but which the students made true in 2016.

Driven by the adversarial political contexts, movements of powerless students – untainted by money and muscle power – evolved. Student groups changed from being partisan to forces that constantly adapted and fought strategic battles against majoritarian and casteist actions and policies of the government.

At each and every political juncture, students hit the bull’s eye with strong questions. Be it the mob murder of Muhammad Akhlaq in Dadri, the constantly declining autonomy of modern institutions, demonetisation, or a sustained attack on federalism waged by the current government or its authoritarian handling of the Kashmir protests – students emerged as the fiercest oppositional force in India.

When the political parties kept tiring themselves in parliamentary logjams or in half-hearted online campaigns, students from all over bonded over issues which were central to the basic tenets of humanism. Students brought the heart back into politics – challenging not just the NDA government but the whole political class. 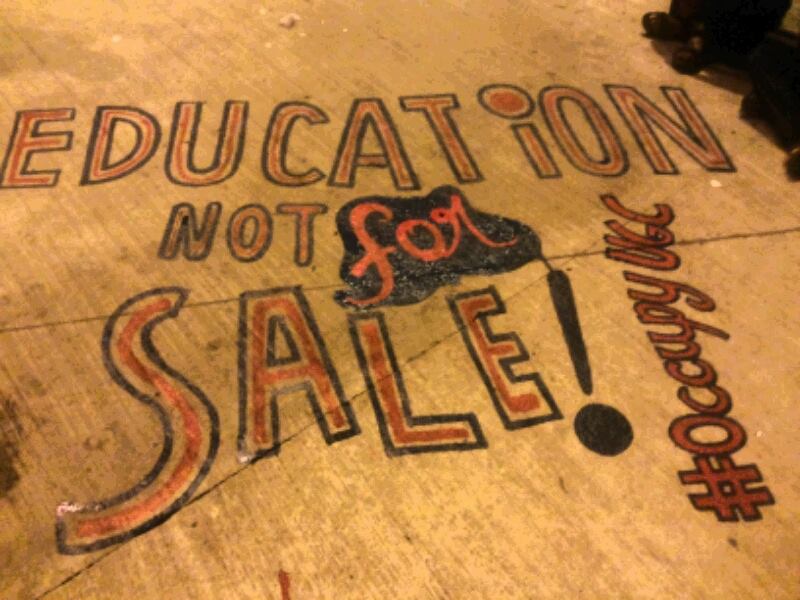 Particularly exemplary was the non-partisan way in which they acted. Take for instance, the Students Federation of India (SFI), the student’s wing of the Communist Party of India (Marxist) – SFI took an anti-parent party stand when the CPI (M)-led Kerala government pressed sedition charges on Kamal C. Chavara, a Malayalam author who was arrested for posting a critical social media comment against the recent imposition of the national anthem in cinema halls. Staying true to its ideology, it did not betray the long battle that it had been fighting against the indiscriminate use of sedition laws.

At a time when students united in resistance, only the ABVP toed the official line. Immersed in money and power politics, the ABVP, which too had fought a bitter battle against the political establishment during the days of emergency, reduced itself to a mere cogwheel in Sangh parivar’s propaganda machinery. For its anti-students activities, violent methods, coercive tactics, the saffron party will be remembered on the wrong side of history many years down the line.

2016 will be remembered as the year in which students rose in resistance against all forms of oppression to build the only credible opposition to the government. Their efforts to widen the scope of Indian democracy continues unabated. Unlike France 1968, where students denounced renaissance moralism and industrial values, the Indian students’ movement crafted a trajectory to rebuild the legacies of Karl Marx, B.R. Ambedkar and Bhagat Singh and Jawaharlal Nehru. Yet, it was not a throw-back to the old world. It was about reinstating the Indian values of secularism, socialism and egalitarianism. Who else, if not young radical students trying to discover the world, would push the boundaries of our philosophical progress?

Perhaps, to repeat what famous poet and playwright Bertolt Brecht had said long ago in his famous poem What has happened would not be incorrect. “The revolution has won its first battle; That’s what has happened.”