Gogoi alleged he was mistreated and manhandled by the authorities while being taken from the hospital where he is being treated to the assembly building. 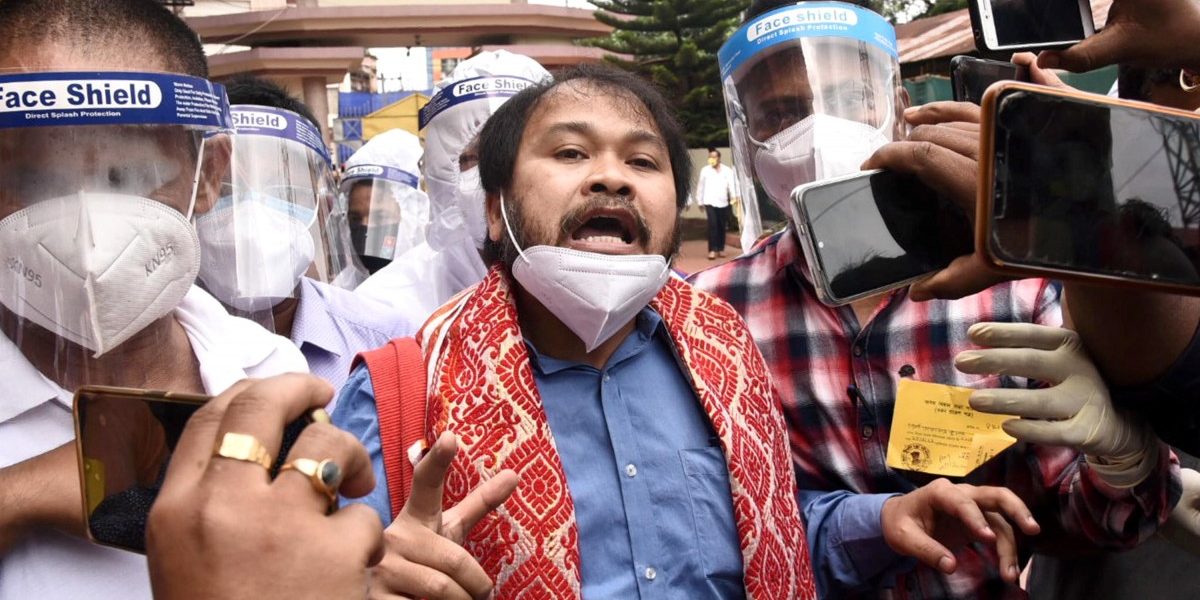 File image of jailed rights activist Akhil Gogoi arriving at the Assam Legislative Assembly to take oath as an MLA in Guwahati, Friday, May 21, 2021. Photo: PTI/File

Guwahati: Incarcerated peasant leader and Right to Information (RTI) activist Akhil Gogoi made history on Friday by taking an oath as an elected Assam MLA while still in prison.

But before making history, he alleged that the authorities ‘mishandled’, ‘pushed’ and ‘shoved’ him, ‘treating him like an animal’ and putting him in a dilapidated bus before he could take oath.

Gogoi alleged that his ‘mistreatment’ at the hands of the authorities started en route from Gauhati Medical College Hospital (where he is undergoing treatment) to the Assam legislative assembly.

He also alleged that on the way, he was ‘reminded’ by a magistrate that since he is an under-trial prisoner, no antics, protests or consternation on his party would be tolerated.

Gogoi has been incarcerated since December 2019 for his role in the anti-Citizenship (Amendment) Act protests that rocked Assam in the winter of that year.

Gogoi was surrounded by security personnel, assembly officials and the media, and amidst the jostling as he was being led inside the assembly building told the media that it is a matter of great humiliation for Assam and its people that an elected representative was being treated in this manner by the Bharatiya Janata Party-(BJP) led state government.

As other elected MLAs began to take their oaths inside the assembly, Gogoi with his ubiquitous traditional ethnic-tribal handwoven stole and jhola bag, was accosted and hurried in by security personnel.

As he struggled to speak to the media he said, “No fascists can stifle my voice. An elected representative like me was brought to the assembly on a dilapidated bus.”

Gogoi took oath at around 11:20 am as an elected MLA (independent candidate) from the upper Assam’s Sivasagar (Sibasagar) constituency.

He told the media, “Look how an elected MLA is being brought to the assembly. Is this the manner or way to treat an elected representative? Isn’t this an insult to Assam and to the people of Assam? From GMCH I was treated and brought here like an animal. The authorities provided me with a broken and dilapidated bus. Inside the bus, there were around 20 police personnel, and the bus was almost full. A constable sat next to me. When I objected to a magistrate that no COVID-19 protocol was being followed I was told that I am an undertrial and my antics will not be tolerated. At GMCH I was not even allowed to talk to the media.”

He added, “When I got down from the bus I was pulled by my pants. I was elected by the people of Sivasagar and authorities here dragged me by my belt. The people of Sivasagar voted me for my work. I should have been set free since I am an elected representative but instead, I was humiliated and tortured. The fascists can kill me, but they cannot stifle my voice.”

It should be noted that Gogoi (contesting as an independent candidate) defeated BJP candidate Surabhi Rajkonwari by a margin of 11,875 votes. He got a total of 57,219 votes, securing 46.06% as compared to his rival candidate’s 45,344 total votes.

The Wire spoke to Akhil Ranjan Dutta, professor and head of department, political science at Gauhati University, on how Gogoi will participate in assembly proceedings.

He said, “It is important that Gogoi is the first legislator in the state assembly who has taken oath as a member while still being under incarceration. People will now look at him and his role for what he does inside the assembly and not outside of it. He has to coordinate with the opposition parties. And also abide by the proceedings of the assembly. I feel he has to conduct himself in a substantive and questioning role. He is a learned person, but everything depends on how he channelises or mobilises his ability, how he questions the government on policymaking, how he raises the voice of the people, also letting the people know what is happening inside the assembly, making the government accountable for its action in a substantive manner with facts and figures.”

The Assam Police filed multiple cases against him for his alleged role in the anti-CAA violence. The National Investigation Agency (NIA) took over two cases which was filed by the Chandmari police station in Guwahati and Chabua police station in upper Assam. The NIA used sedition and other charges under the Unlawful Activities (Prevention) Act against Gogoi.

“There is only one case pending against Gogoi. This is the one filed by the Chandmari police station which was taken over by the NIA. As an MLA he can now make recommendations or write letters. But he has to work within restrain. Without court permission, he cannot visit his constituency. He also has to take permission to participate in assembly sessions. For today’s oath-taking he had to take permission from the court,” said a member of his legal counsel.