Srilata Swaminathan, a Revolutionary Who Fought For Others With Every Breath

For Adivasis in Dhantali, Srilata Swaminathan became a mentor in fighting for a decent life for themselves. 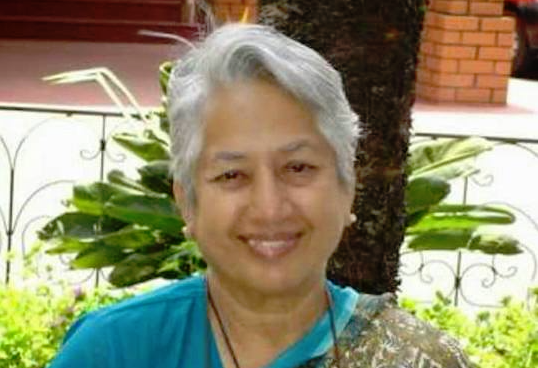 Jaipur: A feisty crusader, a revolutionary, a fearless fighter and someone who thought that structural changes in the society we live in were a definite possibility. This was comrade Srilata Swaminathan, who spent 40 years of her life in an obscure village, Dhantali in Pratapgarh (earlier the district was Banswara), away from bustling Delhi, to be one amongst the Adivasis, sharing their pain and working relentlessly to try and bring about change.

Swaminathan passed away in Udaipur on February 5, after suffering a brain stroke on January 28.

Born in Chennai on April 29, 1944, Swaminathan was from a politically-inclined family. Her family was close to the first Prime Minister Jawaharlal Nehru as well as Indira Gandhi. Her grandmother, Ammu Swaminathan, was a member of the constituent assembly and was elected MP five times from Chennai.

Captain Lakshmi Sehgal of the Indian National Army, who had contested the presidential elections against A.P.J. Abdul Kalam as a joint opposition candidate, was her aunt.

But Swaminathan preferred to spend her entire life in a village that had no roads and no electricity at the time but only Adivasis, who were voiceless against the complete indifference meted out to them by the government. She became their voice, mentor and guide towards wresting a decent life.

Initially, Swaminathan was inclined towards theatre. After college, she joined the National School of Drama in Delhi and later went to London to pursue her interest in theatre.

Kavita Srivastava, head of the People’s Union for Civil Liberties (PUCL), Jaipur, which Swaminathan helped set up, says, “She had a lot of drama in her. Her slogan shouting at many of the protest meets was legendary. Once when we were protesting before the then chief minister Bhairon Singh Shekhawat, Srilata first shouted slogans, then started crying and breast beating and it was something very real that caught everybody’s attention. We have all learnt from her innovative methods of protest.”

In 1972, Swaminathan joined the CPI(ML) and began organising farm workers in Mehrauli. She also worked with hotel workers in Delhi.

She was imprisoned during the Emergency in Tihar jail for about ten months. While Swaminathan was in jail, Gandhi went to meet her grandmother in Chennai and honoured her with title ‘Lady of the year’.

When in Chennai, Swaminathan worked with port and dock workers. She also worked with farmers, painters and construction workers.

But in 1978, Rajasthan became her battleground. Swaminathan could not stand the indifference of the government towards tribals. She worked to alleviate malnutrition and early deaths, and for the forest rights of the Adivasis.

Her husband, Mahendra Choudhry, says, “Srilata was fearless fighter, very liberated and open. She feared no one. She confronted politicians and bureaucrats alike.”

Recounting an incident from the 1980s in Banswara when many tribal workers were being retrenched, Choudhry recalls, “A meeting was on at the Banswara guest house. The then collector and all-Indian tribal commissioner were there. The collector started belittling the tribals, saying they were anyways useless, with many wives and intoxicated most of the time. Srilata sprang to her feet and asked the collector to apologise to the tribals or otherwise she would complain to the chief secretary. And the collector had to bow to her wishes.”

Despite being upfront and frank, Swaminathan had friends across the party lines.

Kavita says, “Once Srilata threw a party on one of her birthday, probably 50th or 60th. And all sections of people came to greet her. There was Shekhawat, other politicians, newspaper editors, creative people, Anokhi’s John Singh and many common people including tribals. She kept it as an open house and warmly welcomed each one.”

Even though she lived in Dhantali, she remained committed towards party work.

In her last years, Swaminathan suffered from debilitating illness but she never cowed down. She treated herself with alternative therapy, including former Prime Minister Morarji Desai’s urine therapy and tribal herbal medicines. She maintained a strict regime and had tremendous will power, which saw her through the illness.

Swaminathan helped set up PUCL in 1996 and was instrumental in bringing in two stalwarts, Prem Kishan and Radhakant Saxena, as well as Aruna Roy, into its folds.

After the gangrape of Bhanwari Devi in 1992, the Dalit woman who was gangraped by ‘upper’ caste men as ‘punishment’ for her efforts to prevent a child marriage in their family, Swaminathan fought shoulder to shoulder with other women activists in every protest that rocked the desert state at the time.

She fought against caste discrimination, gender bias, and state and cultural violence in one breath.

Her great creative energy, infinite enthusiasm and political will continue to inspire many other activists, say her friends and colleagues.

Even when health issues stopped her from attending the AIPWA national conference in Patna in November, 2016, she composed and sang a song for the delegates and sent it to the conference.

Her husband and comrade-in-arms says, “Srilata fought for others and lived life on her own terms because she believed that she had nothing to lose”.