The timing of the CBI's move against the former IAS officer K.P. Ramaiah just as Bihar is about to go to polls, has made it difficult to ignore the political implications.

Patna: The Central Bureau of Investigation (CBI) has issued a charge sheet against former IAS officer K.P. Ramaiah, among 59 others, in connection with the Rs 2000-crore Srijan scam. The timing of the charge, in the run up to the Assembly elections due just before November in Bihar, has created quite the flutter in the ruling establishment.

Ramaiah is the second former district magistrate of Bhagalpur – the nerve centre of the mega-scam – to have been charge-sheeted by the CBI. The first one was Birendra Kumar Yadav, a special secretary at the state government’s social welfare department.

But it is the charge sheet against Ramaiah that is said to have created “anxiety” particularly in the ranks of the ruling Janata Dal United. This is because Ramaiah was a “blue eyed” officer of Chief Minister Nitish Kumar. The extent to which Nitish liked Ramaiah was evident from the fact that the IAS officer, originally belonging to Andhra Pradesh, joined the JDU after voluntarily retiring from service and contested the Lok Sabha elections from Sasaram as a JDU candidate against Congress’s Meira Kumar, unsuccessfully, in 2014.

Also read: Why Nitish Kumar Is Indispensable for the Winning Side in Bihar

The CBI charge sheet has alleged that Ramaiah deposited public funds worth Rs 3.50 crore in the account of the Srijan Mahila Vikas Samiti (SMVS) and allotted it public space to open its shops in the premises of Bhagalpur’s Sabaur block office, in violation of RBI guidelines and other stipulated rules.

Ramaiah is said to be absconding and incommunicado. The June 28 charge sheet says that Ramaiah had resorted to these “malpractices” when he was the district magistrate of Bhagalpur in 2011.

That he was ‘trusted’ by the chief minister is also evident from the fact that he was appointed Member Secretary of the Bihar Land Tribunal – a quasi judicial body – after he lost to Meira Kumar in Sasaram. “A person affiliated to a political party should not have been appointed as the head of a tribunal,” a CBI source said.

However, the government’s alleged largesse towards the officer in question continued as it appointed him the director of the Bihar Vikas Mission – Nitish’s brainchild to ameliorate the condition of the Dalits and Mahadalits – in 2016.

Also read: The Coronavirus Has Brought Out Years of Inept Governance in Bihar

But the state vigilance bureau found Ramaiah guilty of embezzling Rs 2.50 crore from the amount meant for scholarships to poor students – and charge-sheeted him in 2017. Despite this, he continued on as the director of the BVM and procured bail from a lower court. Some lawyers challenged his bail in 2019 in the Patna high court. Incidentally, the then Chief Justice of Patna high court, A.P. Shahi and another judge, Rakesh Kumar, who were scheduled to take up the case were transferred before hearing it.

After the CBI filed their charge sheet against Ramaiah, the leader of opposition in Bihar Assembly, Tejashwi Yadav demanded the “resignation” of the chief minister for “patronising” a “corrupt” officer for so long. “There are clear evidences that Ramaiah enjoyed the patronage of the CM. Nitish should resign from his office, immediately,” Tejashwi said.

The RJD vice president, Shivanand Tiwary said the CBI should charge Nitish of abetment of the scam. “How can he say that he (Nitish) has not aided and abetted the mega-scam when there is clinching evidence of his patronage to the officers who misappropriated Rs 2,000 crore in connivance with the SMVS over the years, beginning from 2009?” 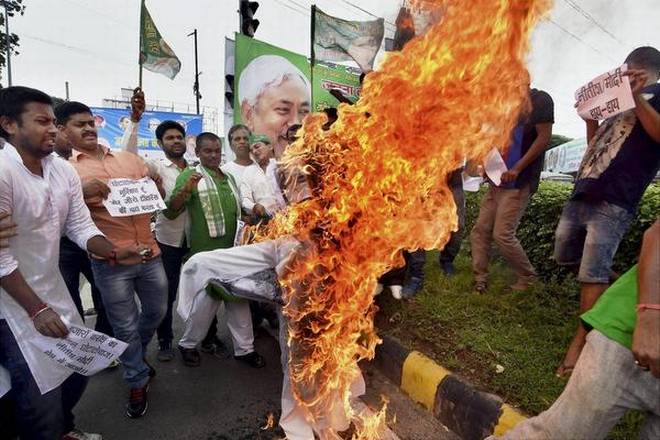 The JDU is tight-lipped on the CBI charge sheet. “Ramaiah is no longer a member of the JDU. We dropped him from the party in 2019. We have no association with him,” said a senior JDU leader, requesting that his name not be mentioned.

What has given a distinct political colour to the CBI’s charge sheet is its timing. Nitish Kumar had handed over the Srijan scam to the CBI soon after breaking out from the RJD-Congress Grand Alliance in 2017. The CBI was, apparently, inactive in pursuing it over the last three years.

Ramaiah is the first person associated with Nitish’s party and his government to have been charge-sheeted in the scam. This, at a time when Nitish is locked in a hard bargain with other NDA partners – the BJP and Lok Janshakti Party over the share of seats for his party. The LJP has staked its claim to about 35 to 40 seats and its chief, Chirag Paswan, is relentlessly attacking Nitish on the issue of governance.

Some observers see CBI’s charge sheet against Nitish’s once “trusted” officer and party man and also Chirag’s tirade against him as the “BJP’s strategy to tighten the noose around him”. Nitish is said to be bargaining for at least 120 seats but the BJP which has declared him as NDA’s face in Bihar is said to be working hard to “keep him in check”.

BJP’s think tank feels that Nitish has accumulated vicious anti-incumbency because of his mishandling of the COVID-19 situation. Besides, the Srijan scam – the biggest ever in Bihar – has robbed him of the “tag” of honesty. “In such a situation, we can’t give him the upper hand at the cost of the LJP. We want fair deal to all out partners – BJP, JDU and LJP,” said a senior BJP leader.

The Srijan scam has its roots in 2009. Then a little known NGO headed by late Manorama Devi, which was engaged in training poor women in making pickle and selling it, it suddenly drew the attention of the government for its work in Bhagalpur. It is alleged that as the SMVM opened a ‘cooperative bank’ to pay its employees and beneficiaries without adhering to the RBI guidelines, Manorama’s influence with officials and the ruling politicians rose. Bhagalpur district magistrates began depositing public funds in the account of the SMVM over the years.

The fact that Ramaiah allotted space in Sabaur block for SMVM to open its office, gave the impression that SMVM was a government office. Nitish government awarded Manorama Devi and many ministers including the deputy chief minister, Sushil Kumar Modi, and the then animal husbandry minister, Giriraj Singh, visited the NGO’s office.

Manorama died in 2017. Apart from Ramaiah, others charge-sheeted in the case include the deceased Manorama and her son and daughter-in-law, Amit Kumar and Rajni Priya, secretary and director of the SMVM respectively. Amit and Rajni are said to be absconding.

Lalu Prasad, when he was out on bail in 2017, had held a press conference showing pictures of Manorama with Nitish, Sushil Modi and Giriraj Singh, alleging that ruling leaders’ nexus and involvement in the scam, soon after the JDU had switched side to the BJP.