The BJP is headed to win all 10 seats; only sitting MLA Deepender Hooda of Congress posed a serious challenge in Rohtak. 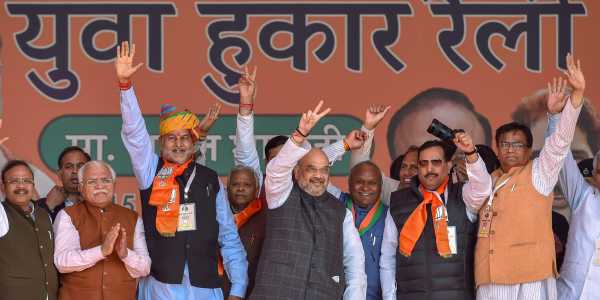 New Delhi: The BJP sprung a surprise in Haryana and appears poised to win all ten seats. Though results for four seats were still “in progress” at 10 pm, the party had a lead ranging from 1.64 lakh to 6.46 lakh votes in all seats barring Rohtak. Here, sitting MLA Deepender Singh Hooda of the Congress, who had won in 2014 by 1.70 lakh votes, was trailing by a slender margin of 2,636 votes.

In nine of the constituencies, it was Congress candidates who came in second. Only in Hisar, sitting MP Dushyant Chautala of Jannayak Janata Party was the runner-up. He had won the seat in 2014 by over 31,000 votes. But back then, he had fought as a candidate of the united Indian National Lok Dal.

The party, launched by former deputy prime minister Devi Lal as Lok Dal, split last year and along with it the Jat vote in the state also got divided.

The split in INLD happened due to differences between the successors of senior party leader and former CM Om Prakash Chautala, who has been serving a jail term for the past many years.

While the original INLD was retained by his younger son Abhay Chautala, the elder Ajay Chautala along with his son Dushyant Chautala floated a new party, Jannayak Janata Party, which allied with Aam Aadmi Party for the polls.

The Jats have been the dominant political class in the state despite constituting just 27% of the population. The Lok Dal and then the INLD, largely thrived on the support of this community.

On the other hand, BJP under Khattar has been working towards consolidating the non-Jat votes and this has been a major reason for the party’s rise in constituencies like Sonepat, Karnal, Kurukshetra and Haryana which fall along G.T. Road.

Also read: How Will Haryana’s Precarious Identity Politics Play Out in the 2019 Elections?

In 2014, INLD had won two seats of Sirsa and Hisar securing 24.43% votes as against BJP’s 34.84%. The Congress was relegated to the third spot with 22.99% votes and just one seat of Rohtak. The assembly election later the same year saw a BJP government getting installed in the state for the first time.

The polling percentages for all the three main parties were more or less similar. BJP polled 33.2%, INLD got 24.1% and Congress polled 20.6% of the votes. In a three-cornered fight, BJP bagged 47 of the 90 seats, INLD bagged 19 and Congress got 15. And by making Khattar, a non-Jat the CM, BJP sent out the message that it would not stand with just one community.

The strategy appears to have paid off and by talking about emotive issues like national security and raising the communal pitch the party took the entire state.