Policemen who didn't file FIRs, journalists who didn't write questioning reports and former CMs who didn't push investigations should all get a share of the credit for making Adityanath UP's chief minister. 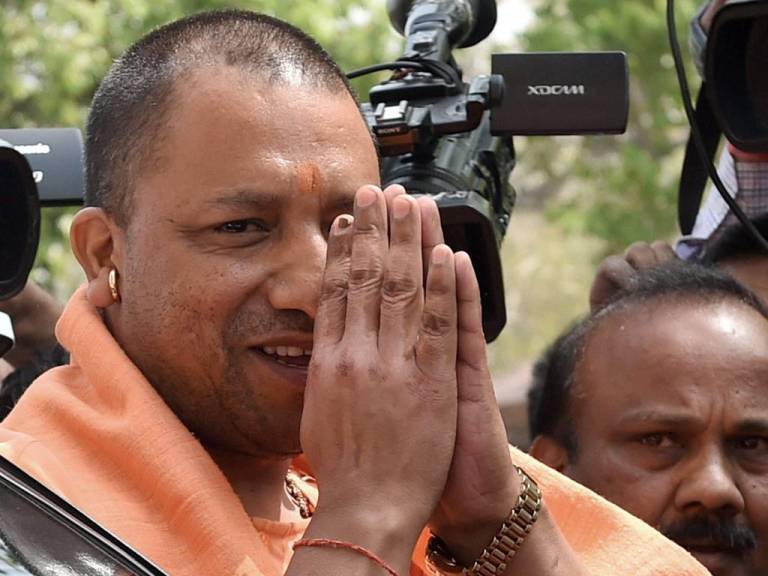 If a political figure finds general acceptance as a ‘firebrand’ leader in a country like India, it only reveals the flaws in our democratic system. Take the case of Adityanath, for instance. Either our legal and administrative system has intentionally ignored his track record of hate speeches that undercut the spirit of our constitution, or he is artful enough to evade the law despite his activities.

The emergence of a ‘firebrand’ leader in any political party reflects a voluntary handicap in the system more than an individual achievement. The fact that such leaders are popular and continue to win in elections proves that a decisive majority supports anti-constitutional elements.

As a documentary filmmaker who has followed Adityanath’s career for a long time and has been a part of several legal actions against him, I believe the appointment of ‘firebrand’ Adityanath to the top post in Uttar Pradesh is not so much to the credit of the BJP and the Sangh as it is to the opposition parties that offered him protection and to our flawed legal system.

One of the scenes from my documentary Saffron War: A War Against Nation includes a segment from Adityanath’s speech delivered in Azamgarh in 2008. He is heard saying, “If one Hindu is killed, we won’t go to the police, we’ll kill ten Muslims.” It was watched by 32 lakh people within three days.

This particular speech was subject to much debate in the media. But when the filmmakers – Rajiv Yadav, Lakshman Prasad and I – sent a CD of the recording along with letters to the chief election commissioner and Election Commission of India (dated March 20, 2009), and to the chief election officer (dated March 23, 2009) demanding an FIR against Adityanath and Ramakant Yadav under Section 125 of the Representation of People’s Act 1951 and other legal provisions, there was no response.

We then took the matter to the Allahabad high court. On April 16, 2009, Azamgarh’s then additional superintendent of police (rural) denied the existence of any such speech in court, despite Adityanath having declared his involvement on several occasions. Not only did the verdict not condemn the provocative speech as criminal and disturbing communal harmony, the court also rejected the application as baseless and falsely accused the applicants of fabricating evidence.

In his speech, Adityanath had also perpetuated the lie that the Uttar Pradesh high court had questioned the state government on why so many Hindu girls were eloping with Muslim men. Attributing such false quotes to the high court, he even tried to justify sexual violence against Muslim women. While it stands as a strong example of contempt of the judiciary, the court took no action despite being provided the CD and transcript of the speech. If convicted, punishment for contempt is three years to life imprisonment.

Clearly, the emergence of a ‘firebrand’ leader owes more to the criminal role of the political mechanisms that fail to curb divisive words and speeches, rather than the person choosing to use such language.

Given the long list of cases filed against Adityanath, examples aren’t hard to come by. On January 27, 2007, he delivered a speech in the presence of MLA Radhamohan Das Agrawal and mayor Anju Choudhary at the Gorakhpur railway station, threatening bloodshed if a taaziya procession was taken out. He claimed he had instructed his men in neighbouring villages as well. Following Adityanath’s provocative speech, several incidents of anti-Muslim violence were reported in Gorakhpur, Deoria, Padrauna, Maharajganj, Basti, Sant Kabirnagar and Siddharth Nagar.

After the rioting, in which Muslims suffered crores worth of damages, registering an FIR with the police in Mayawati-ruled UP turned out to be a pointless effort. Social activists Parwez Parwaz and Asad Hayat entered a writ petition in the Allahabad high court demanding an FIR, but the court dismissed it, ordering action under Section 156 (3). Another appeal to register an FIR was filed in the district court of Gorakhpur. A hearing held ten months later dismissed the appeal. A revision petition was filed against the order in the high court. It was then that an FIR was finally registered in the case.

According to then chief minister Mayawati (in part one of her autobiography Mere Sangarshmai Jeevan Evam Bahujan Movement Ka Safarnama), she wrote a letter to then Prime Minister Atal Bihari Vajpayee demanding a ban on Adityanath because of his anti-national activities. But despite her claim, getting an FIR filed against Adityanath during her term meant entering several petitions in court.

After the FIR was registered, co-accused in the case Choudhary filed a special leave petition in the Supreme Court demanding a stay on the high court order to file an FIR and start an investigation. On December 13, 2012, the Supreme Court dismissed the special leave petition and ordered a CBI probe, but the Akhilesh Yadav government did not grant permission to the investigating officer. The case still remains at that stage.

Here, mention must be made of the anti-Muslim violence that took place in Padrauna and Razanagar in 2007, when not only were Muslim-owned kiosks burned down, Hindu shopkeepers were also given their spots overnight. The then Mulayam Singh government refused to call this a communal incident. Clearly, both the Samajwadi Party and the Bahujan Samaj Party have played their part in shielding Adityanath. 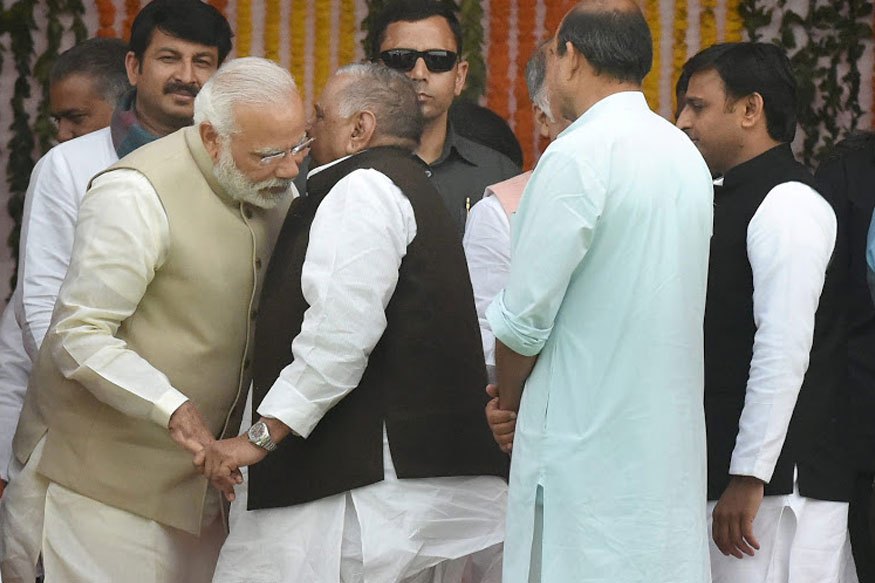 Adityanath is not a political figure who has suddenly emerged on the public scene, as many mediapersons and liberal intellectuals seem to believe. He is a system in himself, working for a long time now with his own army, legal system and administrative staff. He even has his men installed in the government, who are loyal to no one but Adityanath.

I purchased a CD titled ‘Yogi Ji Ki Sena Chali’ from Gorakhnath mandir and found one of its songs objectionable. After a leftist leader called a press conference in Gorakhpur to report it, within minutes the CD was removed from the market and I was advised to leave town as soon as possible. The song in question is included in my documentary film. The lyrics refers to the Mohan Mundera scandal of Deoria district, in which 76 Muslim houses were burnt to ashes by Hindu Yuva Vahini members following a hate speech by Adityanath, which he delivered from the local mosque’s microphone. In the song, the Hindu Yuva Vahini takes credit for the incident, even though they had denied any involvement in court. Lyrics of the song include the following lines:

(We surrounded the vidharmis, beat them up and burned down their houses
So the Hindu Yuva Vahini’s dreams can come true)

While Adityanath was being congratulated for his appointment as chief minister, I could feel only pity for the police officers who had refused to file FIRs against him, the investigating officers and judges who had formed a nexus to shield him, the journalists who had avoided any reports against him and the non-BJP chief ministers Mulayam, Mayawati and Akhilesh who hadn’t pushed the cases against him. It is unfair not to give them due credit. Why was their contribution to Adityanath’s success not acknowledged? Why were they not congratulated?

We must not forget that Adityanath is the product of political and cultural phenomena that have developed alongside the Indian nation, which are not only averse to the values formally claimed by the Indian state, but also work to upturn the country’s declared principles and change the country’s very aims.

These phenomena have been rendered so natural that people are unwilling to accept them as abnormalities, leave alone consider their harms. Which is why Adityanath, as a ‘firebrand’, has found general acceptance among the common masses. This same acceptance has been given to the information that the revolver used to assassinate Mahatma Gandhi came from the Gorakhnath Peeth, that former mahant Digvijaynath was jailed for his involvement in Gandhi’s assassination and that Digvijaynath was also involved in placing Ram’s idols inside the Babri Masjid in the night between December 22 and 23, 1949.

Two incidents have shaped the present and future of the Indian nation-state – the assassination of Gandhi and the placement of Ram idols inside the Babri Masjid. If the supremo of an organisation which has alleged involvement in both cases is appointed to the top post in the most populous state in the country, the message is clear.

Adityanath’s appointment is a blow to that concept of India which would not have killed Gandhi nor placed idols inside a mosque. This is why his supporters see a the resolve for the creation of a ‘new’ India in his hate speeches. The same resolve could be seen in Nathuram Godse before he pulled the trigger on Gandhi, or by the men who placed the idols in the Babri Masjid.

When a powerful Hindu Yuva Vahini leader, in the presence of Adityanath and other women leaders on stage while addressing a Hindu Chetna Rally in Siddharth Nagar, called for the rape of dead Muslim women dug out from graves, the way the crowd, journalists and policemen cheered did not seem new or unusual. The same was true when the leader spoke of revoking Muslims’ voting rights. It was as if their voices had been muffled for a long time under certain pressures. In one of the visuals in my film, the transformation of a policeman into a Hindu Yuva Vahini activist, with a saffron band tied across his forehead and a trident in his hand, did not look unnatural. And this is what renders it all the more dangerous.

But in the midst of the like-minded crowd cheering at the Siddharth Nagar rally, I think about the man who protested against the Yogi bhakts who tried to kick a ten-year-old Muslim boy playing with other kids of his age out of the rally. He told the bhakts, “He’s just a boy, let him play.” I wonder if he still retains his individuality.

On April 2, when the newly appointed chief minister will sit alongside Supreme Court and high court judges at a programme in the Allahabad high court premises, it will also be taken in its stride as a usual incident.

Ironically, Adityanath has to make decisions in several cases against himself. But it does not make a difference. Nor does the fact that to be seen alongside an accused in criminal cases in public or in secret is morally wrong.

This reminds me of the deceased father of a journalist friend who used to be a judge in Azamgarh. He died of a heart attack in the high court premises. He could have been saved but for his refusal to accept a lawyer’s offer to take him to the hospital on his scooter. He found it morally wrong to be seen on a lawyer’s scooter, even to save his own life.

Translated from Hindi by Naushin Rehman. You can read this article in Hindi here.