Smriti Irani being given the I&B ministry has come as a surprise to many as the post requires the deft handling of the media while presenting the government’s point of view. 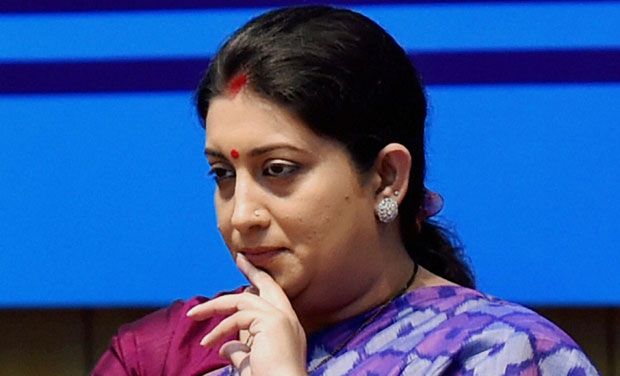 New Delhi: In the quick reallocation of work necessitated by the BJP choosing M. Venkaiah Naidu as its vice president candidate for the August 5 elections, the Narendra Modi government has decided to allot his portfolios to cabinet ministers Narendra Singh Tomar and Smriti Irani.

Textiles minister Irani, who was moved out of human resource development ministry in the wake of several controversies surrounding her educational qualification and run-in with the media and academics over the Centre’s increasing interference in the running of key academic institutions, has been given the additional charge of the all-important information and broadcasting ministry.

This has come as a surprise to many as Irani is known for her strong views and harsh manner of speaking at times while the post requires the deft handling of the media while presenting the government’s point of view.

Irani will be the fourth incumbent of the portfolio in the three years since the Modi government took charge – first was Prakash Javadekar, then Arun Jaitley followed by Naidu – and the second I&B minister to hold charge as a joint portfolio.

Naidu’s other portfolios, namely the housing and urban affairs, has gone to steel, mines, labour and employment minister Tomar, the BJP MP from Gwalior.

Ahead of the announcement there was some speculation that the Modi government would want to lighten the load on Jaitley, who currently hold the finance and corporate affairs portfolio as well as that of defence after Manohar Parrikar returned to Goa as chief minister.

The signs are clear that Modi for the time being does not want to induct new faces into his cabinet from outside and is content with making do with the resources he has on hand.

The communique regarding the reshuffle was issued by Rashtrapati Bhawan, which also noted that the president of India, as advised by the prime minister, has accepted Naidu’s resignation from the council of ministers.