The RSS chief’s gesture is aimed more at addressing the Modi government’s foreign critics. His hands are tied when it comes to any policy fine-tuning. 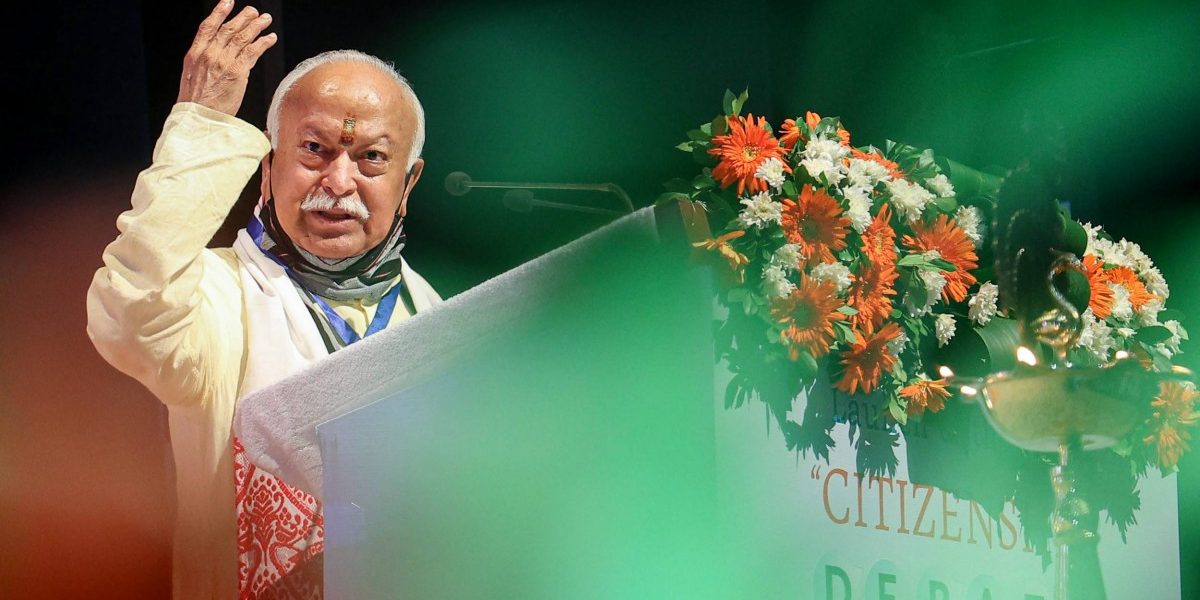 Unfortunately for them, the RSS camp has not been so enthusiastic about Bhagwat’s glasnost. For the record, this is not the first time that Bhagwat is making such gestures. He had thrown such hints during his ‘outreach’ programmes earlier. Notwithstanding the dampening signals from Nagpur, there are six compelling factors that act as roadblocks, even if Bhagwat wishes to push his ‘reconciliation’ offer.

First is a fundamental riddle: can the RSS, whose very raison d’etre has always been Hindu supremacism and hatred of Abrahamic religions, suddenly come down to equality of all religions and reconciliation? Those of us who reported the RSS and its innumerable allied outfits for 40 years view such gestures with a pinch of salt. At times, Nagpur did compromise on its hard Hindutva ideology but only as a strategy to gain a firmer foothold.

It briefly compromised during and after the Emergency. But it put its foot down when the ruling Janata Party leaders objected to the remote control of Bharatiya Jansangh representatives from Nagpur. The ‘dual’ membership issue took it to the breaking point. In 1984, the RSS toppled Vajpayee for his deviation from its ideals and clinging to ‘Gandhian’ socialism. Advani himself was later punished for his pro-Jinnah remarks in 2005. Soon he was ousted as BJP president. With such a track record, can one expect a sudden change of heart by Mohan Bhagwat?

Also read: ‘Vajpayee: The Years That Changed India’: A Ringside View of the Political Saga in 1996-1999

Second, the RSS hierarchy has always carefully adhered to a two-level strategy. While the right-wing organisation’s seniors and its journals like Organiser and Panchjanya harp on the ‘nationalism’ part of Hindutva, the role of operationalising hatred on the ground is left to allied outfits like the Vishwa Hindu Parishad, Bajrang Dal and other unknown local groups. The assaults on minority communities – lynching of Muslims by cow vigilantes, ‘love jihad‘, attacks on churches or harassment of nuns – are largely done by the ‘fringe’ groups like the Shiv Sena in North India and such other right-wing outfits.

In the RSS, the real breeding ground for communal hatred has been the local shakhas (branches). Anyone who has attended a shakha will tell you how it works. After the drill and games like kabaddi, the indoctrination begins. It can be in the form of heroic tales of Rana Pratap Singh’s valiant fight against Muslims or the alleged harassment of Hindu girls by the “skull caps”. Stories of Christian padris converting tribals by luring them into their faith are frequently told at the shakhas. There are innumerable jokes about Abrahamic religions which are repeated at shakhas from Tamil Nadu to Jammu. Since what happens at the shakhas is not known to others, no one can be held accountable for the false narrative.

Third, if Nagpur is really serious about a detente, it could bring about a halt to the ongoing harassment of minorities within weeks. Like it silenced its outfits such as the Swadeshi Jagran Manch, the Bharatiya Mazdoor Sangh (BMS) and the Bharatiya Kisan Sangh (BKS) which had in the early months of Modi’s rule persistently opposed the new government’s liberalisation policies. The RSS imposed a compromise between the two sides at a three-day meeting of top leaders, including then party chief Amit Shah, in Agra on September 3-5, 2015. In the event of major policy shifts, the RSS holds chintan baithaks of all allied outfits, including its senior ministers when in power to bring about an internal alignment. Now, five weeks after Mohan Bhagwat’s olive branch, there are no signs of any such policy review.

Remember what happened to the adamant Akhada groups at the Hardwar Kumbh Mela. Hours after an appeal by Prime Minister Modi, they all obligingly agreed to make their celebrations symbolic. That is the kind of sway Modi and Bhagwat have on the Hindutva groups. But in the present case, the two have scrupulously avoided taking any initiative.

Also read: Bhagwat’s Call For Hindu-Muslim Dialogue Is Welcome, but a Shift in BJP’s Politics Is Crucial

Instead, and that is the fourth, the Muslim bashing and frenzied war cries continue unabated. Look at the hate incidents that happened after Bhagwat’s peace offer on July 4 and just before it.

Fifth, Prime Minister Modi’s highly successful hybrid regime model is sustained by various pillars: his own image as a doer, a vice-like grip on communication, high-cost election campaigns and the systematic use of law enforcement agencies like Enforcement Directorate and National Investigation Agency, both to tire out the Opposition and to force defections.

But the creation and sustenance of a hate-based Hindutva vote bank is a key pillar. A Lokniti survey highlighted a discernible Hindu consolidation in the 2019 Lok Sabha elections. This meant Modi has fairly succeeded in building a broad Hindu coalition, it said.

In this scheme of things, Nagpur has been assigned to play a crucial role. As per the calculation doing rounds among the BJP MPs, if the BJP under Modi could win 50% of India’s 80% Hindu electorate, it constitutes 40% of the national vote share. This is an attractive proposition for Modi’s hybrid model. A reconciliation with the minorities will upset all such power calculations. Neither the Modi-Shah duo or Bhagwat are going to risk this.

Sixth, the advent of a more liberal regime in the US has its echo on Modi-Bhagwat’s Hindutva-based survival strategy. Despite all diplomatic camouflaging, there has been growing concern in the US about the Modi government’s illiberal approach and divisive policies. The western media has been increasingly highlighting the hate crimes and organised attacks on minorities. New Delhi turns defensive whenever a human rights body or democracy rating institution comes out with a critical report.

Such snubs have begun acting as speed-breakers in the Modi juggernaut’s March onward. New Delhi has been taking the line that most of the minority bashing is the handiwork of fringe elements. Bhagwat’s July 4 gesture has to be viewed in this light. Incidentally, the RSS’s ‘outreach’ programmes since 2017 have been on similar lines. The six factors discussed above show how the RSS chief’s hands are tied when it comes to any policy fine-tuning.