According to reports, Baba Aman Singh may have been part of efforts to end the farmers' protest against the three Central laws. 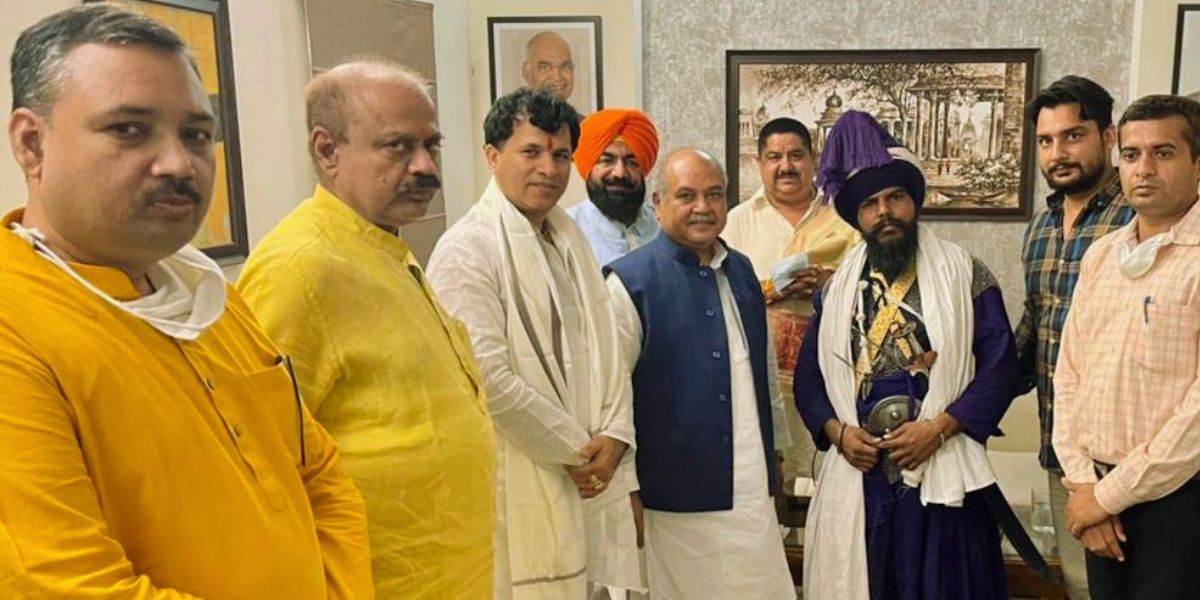 Jalandhar: Photos of Baba Aman Singh, the chief of the Nihang group whose members have been arrested for the Singhu border killing, meeting with Union agriculture minister Narendra Singh Tomar, other BJP leaders have gone viral on social media, causing a furore.

In the viral photos, Tomar is seen honouring Baba Aman Singh with a siropa (robe of honour) and having lunch. During the meeting, they are believed to have discussed the contentious farm laws. The photos evoked sharp reactions from farmers, civil society and the Punjabi diaspora. The meeting took place in late July, when BJP leaders in Punjab and Haryana were facing mass protests over the laws.

Baba Aman Singh is the chief of the Nirvair Khalsa-Udna Dal, the group whose members have been arrested for the killing of Lakhbir Singh at the Singhu border on October 15. They executed the man, who is from a Dalit community, accusing him of ‘sacrilege’.

As The Wire had reported, he had justified the gruesome murder as “punishment for blasphemy” and warned farmer leaders to “think twice before announcing their views” on the killing.

The victim’s family has contested the desecration claim, demanding a high-level probe.

It was learnt that the meeting between Baba Aman Singh, who is from Chamkaur Sahib in Punjab, was held at the bungalow of minister of state for agriculture Kailash Choudhary in New Delhi in the last week of July.

While Aman Singh refused to speak to The Wire, it has come to light that he was part of an ‘outer channel’ to end the farmers’ stir, according to a Tribune report. Singh, who is at the Singhu border, is likely to speak to the media later.

Also present at the meeting were Sunil Kumar Singh, an MP from Jharkhand; Saurav Saraswat from Rajasthan; and Sukhminderpal Singh Grewal, the all-India secretary of the BJP Kisan Morcha. Grewal, who hails from Ludhiana, was also looking after the Sikh community’s affairs in Jammu and Kashmir. Despite repeated attempts, Grewal was not available for comments. His phone was switched off.

Another controversial figure who was at the meeting was Gurmeet Singh ‘Pinky’, a former Punjab police cop who was convicted for murder.

In a video interview some years ago, Pinky had admitted that he was witness to over 50 fake encounters during the militancy in Punjab. He and Baba Aman Singh were inmates in Patiala Central Jail, during which time they became good friends. 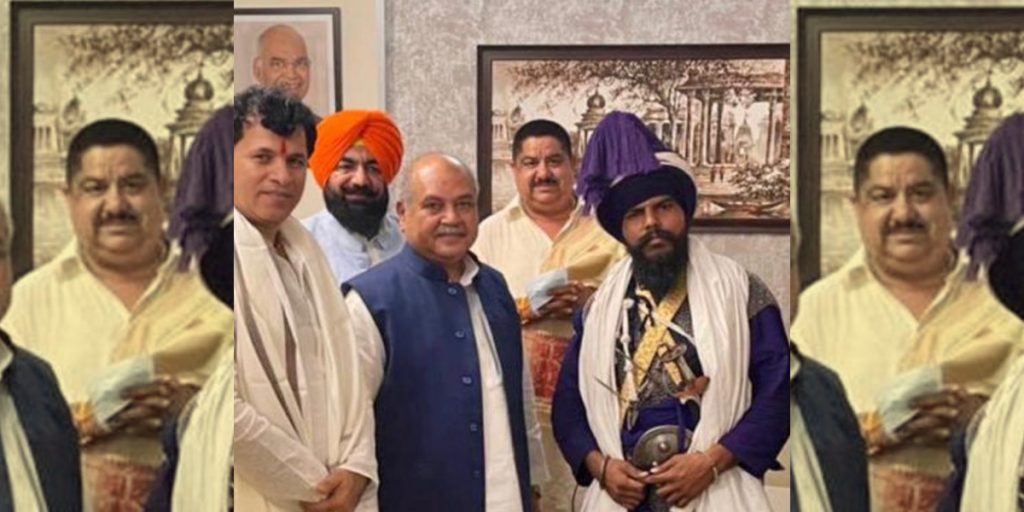 The presence of Pinky in the photo has raised key questions about who set up the meeting between Baba Aman Singh and Tomar.

Pinky was allegedly close to many terrorists. During the militancy period in Punjab in the 1990s, he was a Punjab Police ‘cat’ – a militant turned undercover police agent – who helped the police in fighting terrorism. He became a police officer and rose to the post of inspector, owing to his role in fighting terrorism and his proximity to senior police officers. He was dismissed from service in 2006, subsequent to a 2001 murder case. He was convicted in the murder case and awarded a life term in 2006.

Pinky was the recipient of a gallantry medal for service in 1997, but in the wake of the criminal charges, the Union government withdrew it in 2017.

Talking to The Wire, Raja Raj Singh, the head of the Nihang group Tarna Dal from Sangrur district in Punjab, said, “I met Baba Aman Singh and asked him about the controversy surrounding his viral photos with Narendra Singh Tomar, other BJP leaders and Gurmeet Singh Pinky. I told him to clarify why and where he met the Union agriculture minister. Aman Singh said he will answer all these queries after speaking to his lawyer.”

Raja Raj Singh also said that if Baba Aman Singh is found to have “hobnobbed” with BJP leaders, the groups will boycott him from the Nihang sect. “At the same time, I want to make it clear that we [the other Nihang group] were not aware of his meetings with the BJP leaders. He never shared any such information with any of the eight Nihang groups which are camping at the Singhu border. We want the truth behind the viral photos and the alleged sacrilege of the Sikh scripture to come out,” he added. 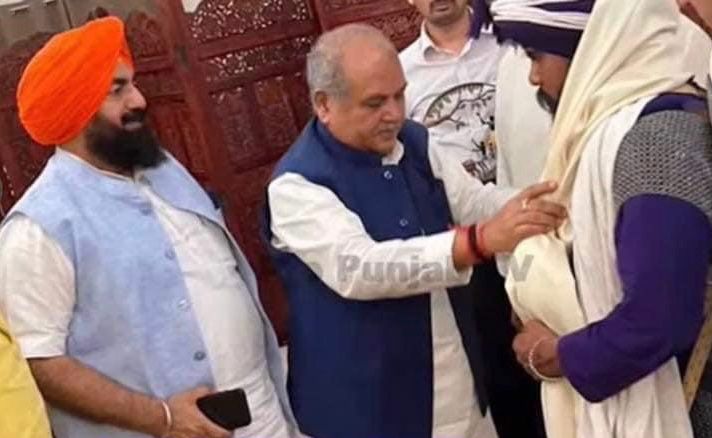 After Lakhbir Singh’s killing, Chandigarh-based senior journalist Jagtar Singh had categorically tweeted that the killing could have many dimensions.

#SinghuBorderHorror Too well known that several Nihang groups hv earlier worked as tools of agencies during militancy. Most of them r from weaker sections, several with criminal background. Singhu killing could have many dimensions.

Speaking to The Wire after photos of Baba Aman Singh’s meeting with Tomar emerged, Jagtar Singh – who is also the author of two important books on the Khalistan movement – said, “It is a larger design to derail the farmers’ protest. The role of the Nihangs has remained under the scanner as they had a history of serving the government.” He gave the example of the Nihangs’ clash with Babbar Khalsa before Operation Blue Star in 1984. Jagtar Singh also spoke about the role of Nihang leader Baba Santa Singh, who acquiesced to the government’s demands to reconstruct the Akal Takht after Operation Blue Star. This move drew flak from fellow Sikh bodies and another Nihang leader, Ajit Singh Poohla, who was had several cases of murder and attempted murder against him.

“While Santa Singh was excommunicated from the Sikh Panth, Ajit Singh Poohla was burnt alive by inmates at the Amritsar Central jail in 2008. The meeting between Baba Aman Singh and Tomar again hints that they [Nihangs] are up to something now,” he said.

It is pertinent to mention that when Nihang groups held a press conference at the Singhu border on Monday over the Samyukt Kisan Morcha (SKM)’s demand that they should leave in the wake of Lakhbir Singh’s killing, Baba Aman Singh was not present.

Watch: Can the Killing at Singhu Weaken the Farmers’ Movement?

“The murder of Lakhbir Singh was highly unfortunate. The Narendra Modi government’s propaganda machinery has left no stone unturned in defaming the farmers’ protest and tried to give the movement false angles. This incident took place at a time when the government was desperately working to scuttle the protest. The presence of any religious body at the protest site not only gives the movement a religious colour but also allows the creation of conspiracies in the name of religion. Our fight is against the three farm laws and the farmers should fight this fascist government tooth and nail and should stay cautious,” they said.

Notably, Lakhbir Singh’s sister had said that her brother was keeping in touch with some ‘big people’ and someone known as ‘Sandhu’ used to call him frequently. In an interview with BBC Punjabi, she had said, “My brother would ask us to go out of the room whenever he got a call from Sandhu. But we don’t know who this Sandhu was. He was misled by someone, who took him to the Singhu border, as he could never think of desecrating a holy scripture.”

Meanwhile, it also came to light that on October 13, Lakhbir Singh was at a wedding in his village, where a man dressed in the robes of the Nihang sect came and took him along. That was the last time his family saw him.