Sikh Farmers, Diaspora Sad But Not Surprised to Learn of Fake Social Media Accounts Against Protests

Active members of the farmers' protest said they knew social media was being used to target them – and that's why they came up with their own social media strategy. Ranchi: Even after the Narendra Modi-led government announced that the three controversial agri-marketing Bills will be withdrawn in the next session of the parliament, the farmers’ protests continue.

The Samyukta Kisan Morcha, the governing body of the movement, says that the withdrawal of the three laws is only an acceptance of half of their charter of demands. Therefore, protests shall continue, they said in an open letter to the prime minister earlier this week.

Furthermore, supporters of the movement say that a year-long vilification of the movement by ministers in the government, and the ‘murders’ of over 700 farmers, are hard to forgive and forget.

In this backdrop, a report has been released by a UK-based organisation – Centre For Information Resilience (CIR) – which has  revealed that fake social media accounts were being run on Twitter, Facebook and Instagram to run a divisive propaganda against Sikhs and discredit the struggle of a majority of farmers in the ongoing stir.

“We will continue to monitor accounts associated with the patterns”

The CIR report is authored by Benjamin Strick, who is a digital investigator. He specialises in open source intelligence, geospatial intelligence and data analysis, and has a background in the military and law.

His research notes that a network of social media accounts are being run by fake personas to amplify divisive politics on Twitter.

The report says that social media posts made by accounts operated by fake personas, having profile pictures of celebrities and seemingly Sikh names, were aiming to spread a notion that one is a “real Sikh” only if they supported the Indian government, and a “fake Sikh” if they supported the Sikh independence movement for Khalistan.

These posts were further used as a tool to discredit the farmers ‘movement, where a large number of farmers are Sikhs, the report notes.

The report also says that core accounts which positioned themselves as “real Sikhs” saw engagement from many accounts which identify as Indian nationalists. “This suggests the influence operation may be targeting audiences within both Sikh and Hindu communities,” it says.

Responding to an email questionnaire sent by The Wire, Strick said that he started to dig into some of these accounts while he  was looking at various “influence operations” targeting the subject of the farmers’ debate.

“I originally discovered this network earlier this year, and then over the course of the following months, identified further patterns in the accounts’ behaviour,” he wrote.

When asked if the CIR knew if these accounts were being run as a part of a government run IT-cell or was run by Indian citizens, Benjamin wrote that while the accounts are supportive of the Indian government, there is no evidence linking them to the Bharatiya Janata Party-run IT cell.

“At this moment there is no evidence linking this network directly with the Indian government. We will continue to monitor accounts associated with the patterns detected in this network, as well as other influence operations targeting issues in India and the wider diaspora community,” he wrote.

Former BJP IT cell employee says “all of this is true”

In the month of December last year, a young Sikh man, Sukhpreet Singh, had publicly stated how the BJP IT Cell, for which he was working at the time, was running false propaganda against the farmers’ movement and the Sikhs. Following his public statement, he quit the IT cell.

Speaking to The Wire, Singh said, “All of this (the findings of the report) is true.”

“I can say that the maximum number of accounts with Sikh names, run by the BJP IT at the time, are people who aren’t actually Sikh,” he said.

“These may not directly be BJP IT cell accounts but I have a hunch that they’re being run by Indian government agencies,” he said.

According to the CIR report, the accounts with fake personas had a core network, which saw multiple interactions with real, honest accounts. As a result, these fake accounts saw engagement from many verified accounts.

The report said a few verified accounts may also be a part of the network, which were used to amplify the tweets of the core network of fake accounts.

The report also provides a circular chart to understand how core fake accounts interacted with the rest of the network. “Visualisations based on the number of interactions are helpful in identifying not only the accounts that have more traction – in this case the core network of 80 fake accounts – but also the supporters of those core accounts who spread and amplify their content,” the report notes.

Supporters of the movement, who have read this report, say that none of this has surprised them. In fact, they told The Wire that this has only refreshed their memories, reminding them of a systemic network which was built to delegitimise a peaceful and democratic protest.

Bhavjit Singh, a farmer’s son and the owner of the ‘Tractor2Twitter’ account, had carried out door-to-door campaigns in Punjab in the early days of the movement, asking Punjabis to join social media as part of their support for the movement, and to specifically counter the divisive narrative on the internet.

Speaking to The Wire, he said that their team had noticed such accounts with fake personas back in February last year.

“This report has a small sample size,” Bhavjit said over the phone. “We have been observing this (fake personas) since February and had started updating our followers (of such manipulation) way back in September.”

“We used to call these people ‘sleeper cells’,” Bhavjit added. “The Sikh vs comrade controversy was manufactured by these people. They wanted to hit two birds with one stone. One – divide Punjab on the basis of Sikh vs Comrade and two – dilute strength of morcha.” “We used to see that as soon as we posted something, immediately some accounts would start hurling abuses in the comments in a systematic fashion. We suspect these accounts operated in a similar fashion to how it has been described in this report”,  he said. “The reason we too created a ‘farmers IT cell’ was because we knew that a separate fight on the internet too had to be fought, and this report proves it,” he added.

The CIR report also notes that the accounts who positioned themselves as “real Sikh”ran derogatory and accusatory posts against the Sikh diaspora.

“There have been numerous topics, such as suggesting foreign harbouring of Khalistan in Canada and the UK as well as targeting activists by mixing in several unique hashtags,” the report notes.

In one post, the two Sikh members of the UK parliament – Preet Kaur Gill and Tamnanjeet Singh Dhesi – and one Jagmeet Singh who is member of the house of commons of Canada, were labelled Khalistani. 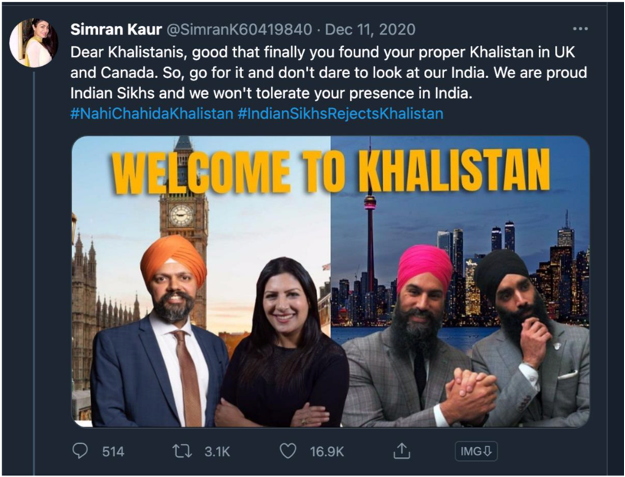 Daljeet Singh, a young supporter  of the farmers’ movement and a lawyer by profession, was born and raised in the UK. His mother belongs to Nakodar in Punjab and moved to London when she was 12.

Ever since the movement gained momentum back in India, Daljeet has been carrying out ‘sleepouts’ across many cities of England. “We would carry our sleeping bags, food and cups of tea and sleep out on the streets to protest the farming policies of the Indian government and their handling of the protest,” he told The Wire over the phone.

“The reason we chose this form of protest was because we wanted to experience what farmers in India were going through first hand. To sit in chilling cold weather, on the streets, looks easy but is not.”

Responding to the CIR report, Daljeet said that it was extremely heartbreaking that the mainstream media and the Indian government, on many occasions, has painted the Sikh diaspora in one colour and delegitimised their solidarity towards the people of India.

“It’s not a surprise to see these fake accounts target the diaspora. The Indian government and media have repeatedly and wrongly labelled members of the diaspora as anti-national when they are simply supporting the people of India in the farmers protest,” he said.

Speaking with the BBC, the media organisation which exclusively released the CIR report, a Twitter spokesperson responded to the findings of the report and said: “At this time, there’s no evidence of widespread co-ordination, the use of multiple accounts by single people, or other platform manipulation tactics.”

After the publication of the BBC report, Meta, which owns Facebook and Instagram, have removed the accounts on the two platforms for violating its “inauthentic behaviour” policies.

A Meta spokesperson told the BBC that the said accounts “misled people about the origin and popularity of their content and used fake accounts to spam people and evade our enforcement”.