Shiv Sena Chooses to Support TMC Over Congress in Bengal, Will Not Contest Elections

After the Samajwadi Party and Rashtriya Janata Dal, the Uddhav Thackeray led party is the latest to throw its lot behind Mamata Banerjee. 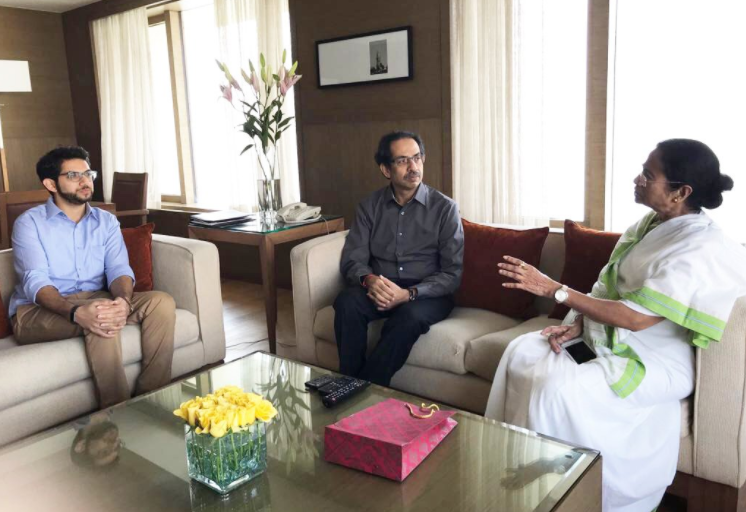 New Delhi: After the Rashtriya Janata Dal (RJD) and Samajwadi Party (SP), the Shiv Sena on Thursday extended its support to the Trinamool Congress (TMC) in West Bengal, adding that it would not contest assembly elections in Bengal.

Hailing the party chief Mamata Banerjee as the “real Bengal tigress”, the party, which had earlier said that it would join the electoral battle in the state, vowed to “stand in solidarity” with the TMC camp.

Significantly, the Shiv Sena has chosen to support the TMC over the Congress, despite being in a coalition government with the latter in Maharashtra.

Senior Shiv Sena leader and Rajya Sabha MP Sanjay Raut, in a tweet, made the announcement and said that the decision was taken following discussions with party president and Maharashtra chief minister Uddhav Thackeray.

Raut took to Twitter and said “at the moment, it appears to be a Didi vs All fight”.

“A lot of people are curious to know whether Shiv Sena is contesting West Bengal polls or not. So here’s the update after discussions with party president Uddhav ji Thackeray.”

“All ‘M’s – Money, Muscle and Media- are being used against ‘M’amata Didi. Hence, Shiv Sena has decided not to contest West Bengal polls and stand in solidarity with her. We wish Mamata Didi a roaring’ success, ‘cos we believe she is the real Bengal Tigress,” he added.

“We welcome Shiv Sena’s decision. We are thankful to Shiv Sena for not putting up candidates in the assembly polls in West Bengal,” TMC MP Sougata Roy said.

The BJP, however, declined to attach much importance to the development.

“What is the stake of Shiv Sena, RJD or SP in Bengal? They don’t have any presence in Bengal. It hardly matters whom they support or not. It is laughable,” BJP state general secretary Sayantan Basu said.

Earlier this week RJD leader Tejashwi Yadav met Banerjee at Nabanna and extended his support to the Trinamool Congress.

Samajwadi Party leader Akhilesh Yadav too has extended his party support to TMC.

A significant takeaway of the Shiv Sena, SP and RJD pledging support to Mamata is that they are shunning Congress and siding with the Trinamool Congress in the battle for Bengal.

The RJD is the Congress’s coalition partner in Bihar and Jharkhand. The Congress and SP had allied to contest the 2017 assembly elections in Uttar Pradesh, but later parted ways.

These three parties do not have any electoral presence in Bengal. Some observers believe they could mobilise some Hindi speaking voters in some pockets of the states in favour of the TMC.

The RJD has promised to rally some Hindi-speaking electors of Bengal in support of Banerjee, particularly in the areas sharing a border with Bihar, where it is the single largest party.

The Congress has entered into an alliance with the Left Front and the Indian Secular Front of cleric Abbas Siddiqui for the Bengal polls.

Reacting to the development, West Bengal Congress president Adhir Ranjan Chowdhury said the decision by regional parties to back Banerjee is “based on their perception” and he would not “blame them”.

“There are different perceptions. Parties like ours in Bengal are the victims of the atrocities and terror perpetrated by TMC. Our pain is different. It is difficult for parties like ours to survive in Bengal given the kind of terror the TMC has unleashed,” Chowdhury told the Indian Express.

He said for regional parties, the threat of BJP is real. “For us in Bengal, we are facing the threats of both — TMC’s dictatorship and BJP’s communalism. Sixty people were killed on the day panchayat elections were held… In around 20,000 seats they won unopposed…if such a situation arose in UP, Bihar or Maharashtra…they would know,” he told the newspaper, adding that the three parties’ support to TMC will not affect opposition unity at the national level.