Since the Modi Dispensation Took Over, It Has Been a Reign of Ruin: Sharad Yadav

The senior leader heading a faction of the JD(U) talks about how the Gujarat elections are likely to set the tone for the 2019 Lok Sabha polls, Nitish Kumar's demand for quota for backward classes in the private sector and more. 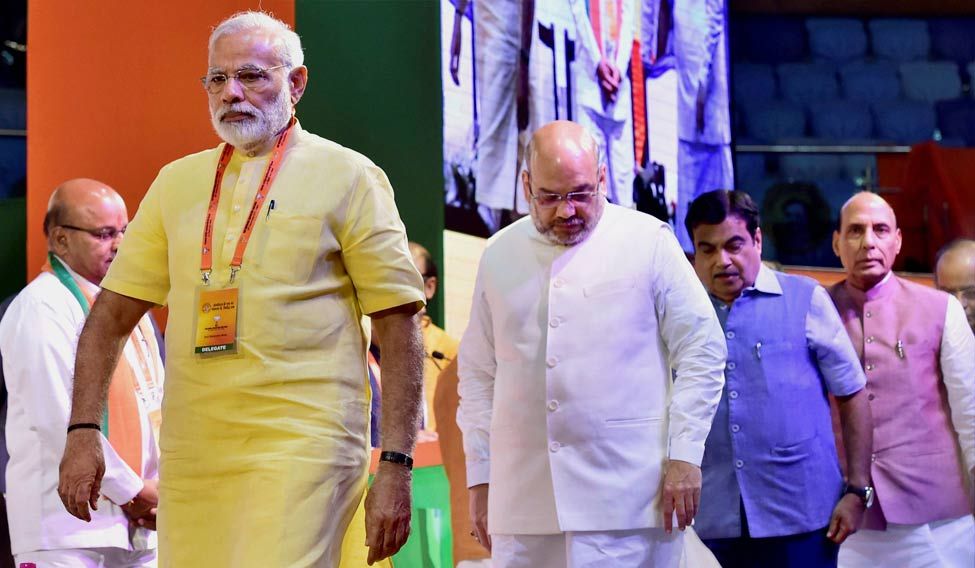 Gujarat polls are set for December 9 and December 14. Credit: PTI

An unfazed Sharad Yadav believes that politics would undergo a change after the upcoming battle on the home turf of Narendra Modi where the anti-BJP forces would surely win. Insisting that Gujarat polls are not just the election of a state but a national election, the Janata Dal (United) leader says that people will stand behind the opposition as the policies of the Modi dispensation, be it demonetisation, faulty implementation of the Goods and Services Tax (GST) or the government’s failure to address the agrarian crisis, have “ruined” the country.

Besides, the problem of unemployment and corruption has rapidly grown under the regime, says Yadav, who until recently was the president of Janata Dal (United). Yadav, however, parted ways with Nitish Kumar after the Bihar chief minister joined hands with the BJP a few months ago.

In an interview to The Wire, the senior leader, who now heads a faction of the JD(U) said the Gujarat polls would set the tone for the coming elections including that of the Lok Sabha.

Yadav feels the anti-BJP forces would throw up a prime ministerial candidate at an appropriate time. “It did not take (the opposition) more than two-three days to elect Morarji Desai as prime minister when the Janata Party gained power after the movement led by Jayaprakash Narayan in 1977.”

Heading the ‘Sanjhi Virasat Bachao’ campaign of the anti-BJP forces, Yadav is strongly critical of his friend turned foe Nitish, accusing the Bihar chief minister of “weakening” the fight of Bihar’s oppressed people by joining hands with the BJP. He recalled how it was the very same oppressed  classes and castes who had dealt a crushing defeat to BJP in Bihar’s last assembly polls.

Yadav also indicted Nitish for “giving legitimacy” to contract labour by espousing the cause of a quota in the private sector.

Alleging that Nitish had “no contribution” in ensuring reservation for the weaker sections, he cautioned that the latest move by the Bihar chief minister was an attempt to divide the forces which have espoused the cause of affirmative action and waged a prolonged battle.

Yadav, who is a leading voice of the opposition in the parliament, was scathing about attempts made by Sri Sri Ravi Shankar to resolve the Ayodhya dispute. Dubbing him as a “political man in religious robes,” Yadav wondered about Ravi Shankar’s locus standi in the matter.

What do you think the scenario will be like on December 18 when results of the Gujarat polls are out?

It is not just the election of Gujarat. It is a national election. Since the Modi dispensation took over, it has been a reign of ruin. It is havoc everywhere. Be it demonetisation, the faulty implementation of GST, the agrarian crisis, growing unemployment, problems of the small-scale sector or the condition of traders. Not only joblessness has grown, so has  corruption. The worse thing in all of this is that they are not talking of “freeing” the country of Congress but of the entire opposition.

We want to stop the journey towards destruction. That is the real issue in the polls. We are confident that people would stand by us and we will win.

Do you see the possibility of an anti-BJP alliance in the next Lok Sabha polls just 17 months away?

Those claiming that there is no opposition or there is no resistance to the government’s moves are not correct (in their assessment). Nowhere in the world, are people left without political alternatives. All the parties involved in the ‘Sanjhi Virasat’ campaign are a part of the possible unity moves. We may not have the strength in the Lok Sabha, but we have defeated the government in the Rajya Sabha thrice. If this is not an alternative then what is?

So how do you look at the political situation after the Gujarat polls?

The process of opposition unity would gather momentum after the polls. In Gujarat, Congress is in the driver’s seat and we (parties like his Janata Dal (United) faction) have been helping the process of uniting people behind the opposition. The polls in Gujarat would set the tone for future polls. (Assembly elections in Karnataka, Madhya Pradesh, Chhattisgarh and Rajasthan are scheduled in 2018 while Lok Sabha polls are scheduled for May 2019).

But who will be the leader of such an opposition alliance? Will there be a UPA-III?

The 1977 elections in the wake of the movement led by Jayaprakash Narayan were fought without such a leader. Morarji Desai was elected the prime minister in two-three days after the results came out. Who knew that H. D. Deve Gowda would become prime minister when the United Front came to power in 1996? There was no declaration affirming that V. P. Singh would be the leader in the 1989 polls. In fact, it was Devi Lal who after being elected the leader, passed on the mantle to V. P. Singh.

BJP is a master in the art of spreading rumours. And now they draw added strength from social media.

The BJP as a party is the fulcrum of the ruling NDA. But the fact is that Prime Minister Narendra Modi and BJP chief Amit Shah are the only two leaders running the alliance.

Also read: Gujarat Polls Not About Caste Dynamics, But People’s Struggle Against the BJP: Alpesh Thakor

Sri Sri Ravi Shankar is making attempts to resolve the Ayodhya tangle? How do you see it?

That man has destroyed the Yamuna bed (by organising a mega festival there over a year ago). Modi government is giving him protection. The National Green Tribunal had fined him severely, but he has not paid up the amount. It shows his morality. I had raised the issue in the parliament.

Besides, I have observed that the government always (one way or another) backs the activities of this person. He is working under government protection.

When Anna Hazare had led the movement for the Lokpal Bill, going on a fast at the Ram Lila Maidan (during the UPA-II days), it was Ravi Shankar who was feeding the people participating in the protest by remaining behind.

When the Ayodhya case is being adjudicated in court, what is Ravi Shankar’s locus standi? Who is he? One thing is clear, without the backing of the government, he cannot work on his own. 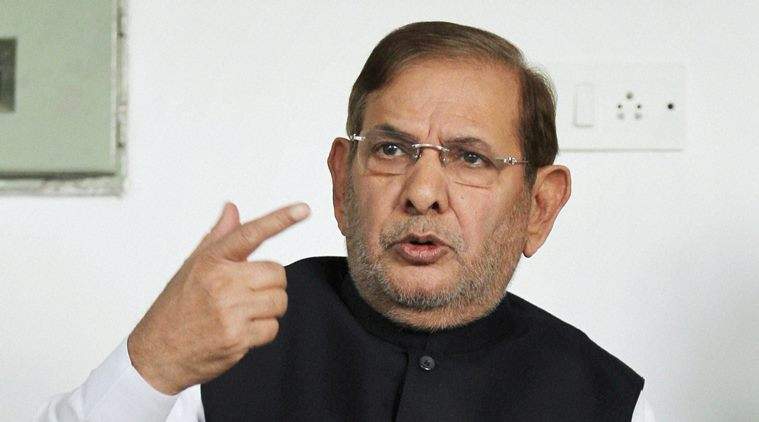 What is the compulsion of Modi to ask Sri Sri Ravi Shankar to resolve the Ayodhya issue?

For three years, the ruling alliance has tried to divide the people on one issue or another. Be it ghar wapsi, love jihad, Taj Mahal, Tipu Sultan or changing names of roads. They have deployed all kinds of ploys to divide the people. It is strange that despite being 85% of the population, Hindus are intimidating members of a community of 15%.

So while the Gujarat poll campaign is still on, this (raking up of Ayodhya) is yet another attempt to divide the people.

In Bihar, chief minister Nitish Kumar has now started advocating quota for weaker sections in private sector jobs apparently to carve out a niche for himself in the politics of backwards. How do you look at this development?

Such a move is a double whammy for the weaker sections given that they had already got reservation in government jobs alongside labour laws favouring the workers. But with market forces becoming dominant, such protection is as good as lost. Contract labour is poison for the youth and it is doubly so for the weaker sections.

Nitish Kumar has never fought for reservation. He has made no contribution. In his latest move, he has attempted to divide the forces favouring quota. He is attempting to give legitimacy to contract labour by favouring quota in private sector. If we go in for such a system, it would be like setting our constitution and labour laws on fire. In Bihar, there is no private sector and no industry. Why is he then raising the issue?

Nitish Kumar by his actions has attempted to divide the struggle of the weaker sections which in the last assembly polls had defeated the BJP convincingly.

Journalists are themselves victims of the system of contract labour. It is very dangerous. Governments are afraid of newspaper barons. How many newspapers have implemented the Majithia Wage Board for journalist and non-journalist employees? Contract labour has now also crept into some jobs in the parliament which makes laws.

Do you see the challenge in the 2019 polls is of a different sort?

It is a challenge. In the last Lok Sabha polls, the BJP had secured 31% of the votes, which means 69% had voted against it.

If one takes this arithmetic, then Hindu vote is more on the side of the opposition. This is because if we assume 15% of the country’s population consists of minorities, then the opposition has got 54% of the Hindu vote which is nearly 25% more than the BJP. It shows that India’s culture is a composite culture because those who voted for the opposition had neither descended from the moon nor came from Europe.

It is surprising how the A. K. Antony Committee of the Congress came to the conclusion that the party suffered in the last polls because it stood by the side of the minorities.