Security has been tightened around the city, with additional forces deployed to sensitive areas as Karnataka waits for the Supreme Court's judgement. 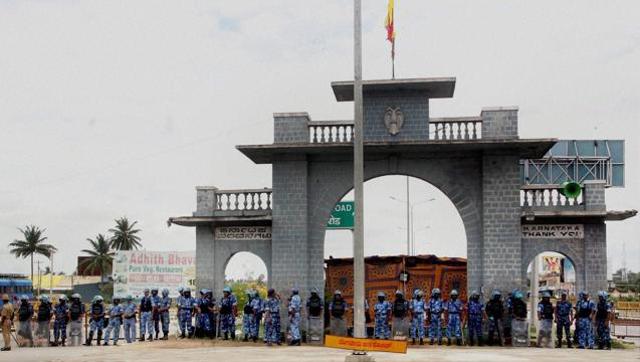 Security has been beefed up around the Karnataka-Tamil Nadu border to prevent disturbances. Credit: PTI

The Supreme Court, which heard the case related to the Cauvery water dispute between Karnataka and Tamil Nadu on Tuesday, directed the state to release 6,000 cusecs a day from September 21 to 27. The apex court also directed the Centre to constitute a Cauvery management board within four weeks.

The Supreme Court order came after Section 144 – which restricts the assembly of five or more people – had been imposed in Bengaluru to prevent disturbances. Section 144 was also been enforced in Mandya’s Sanjay Circle. Restrictions were imposed following Karnataka home minister, G.Parameshwara’s guidelines to the police, asking them to take precautionary measures and keep fire engines and emergency services ready in anticipation of violence, ANI reported. An appeal to maintain peace was also issued to pro-Kannada activists and farmers’ associations.

According to the Times of India, security in Bengaluru has been tightened with additional forces deployed to sensitive areas. Police forces have been on the alert since Monday.

The measures were taken in the wake of the Cauvery water dispute, when Karnataka and Tamil Nadu saw massive protests last week. The Supreme Court had initially ordered Karnataka to release 15,000 cusecs of water to Tamil Nadu for 10 days, on September 5, but later changed it to 12,000 cusecs to be released till September 20, on September 12. The Karnataka government filed a plea to modify the order on September 17, in response to which the court asked both states “to behave.”

Restrictions were similarly imposed in Mysuru, where the protests reportedly began last week when an angry mob burned a Tamil Nadu registered vehicle.