Sanjiv Chaturvedi insists that the government and its functionaries are targeting him for exposing corruption, and has taken the matter to the high court. 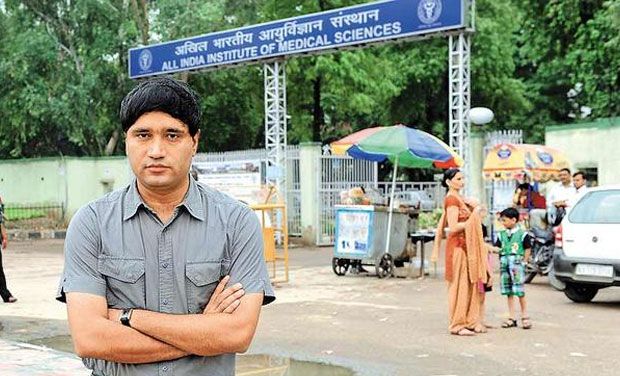 The Central Administrative Tribunal (CAT) has served a severe indictment to union health minister J.P. Nadda, who is also the president of All India Institute of Medical Sciences (AIIMS), and AIIMS director M.C. Misra. The tribunal has quashed orders issued by them against whistleblower and Indian Forest Service officer Sanjiv Chaturvedi for so-called “indiscipline, insubordination and lack of work ethics”. Orders against Chaturvedi were in violation of principle of natural justice, the tribunal said.

Chaturvedi, who won the Ramon Magsaysay Award in 2015 for exposing corruption, had complained to the tribunal that the orders were motivated by “malice” and were issued without a show cause notice or mentioning any specific instance.

The officer’s probation with AIIMS ended in June this year. He has been involved in a protracted legal battle with the Narendra Modi government over the delay in cadre change and denial of his probation to serve as officer on special duty to Delhi chief minister Arvind Kejriwal, who was eager to have him.

Chaturvedi had contended that the order issued by Misra on January 7, 2016 was arbitrary as it had been passed without giving him an opportunity to say his part. Also, the order had threatened that its contents would considered in his annual confidential report (ACR) for 2015-16.

His order said the director of AIIMS had “placed on record his displeasure on (Chaturvedi’s) insubordination, indiscipline and lack of work ethic”. Chaturvedi was then deputy secretary of AIIMS. Nadda had pointed out that Chaturvedi had written to Misra “threatening the administration that the memorandum may be withdrawn failing which he would resort to appropriate legal proceedings against Director and Deputy Director Administration in personal capacity for which the whole responsibility would be that of Director AIIMS”.

Nadda said Chaturvedi’s letter was examined by the institute in consultation with the ministry and thereafter the representation was rejected. The health minister also “upheld & reiterated the displeasure memorandum of the Director AIIMS”.

Challenging Nadda’s order, Chaturvedi approached the CAT in April 2016. He asked the tribunal to quash the orders of the AIIMS director and union health minister against him. He also demanded that they be restrained from making an entry into his ACR. He filed another miscellaneous application in June 2016, on which the tribunal ordered that even if any entries are made into the officer’s ACR, that will be subject to outcome of final decision.

On August 17, the tribunal finally quashed the orders of both Misra and Nadda and fixed the hearing for September 9 on another prayer restraining them from writing the ACR.

The development assumes significance as Chaturvedi had, in his original application filed before the CAT, insisted that the director of AIIMS had made serious adverse observations against him “without giving any opportunity of hearing to the applicant, and without mentioning any reason at all, in blatant violation of principle of natural justice”. He had noted that the order was “so much arbitrary that it does not even mention the specific orders/instructions of higher authorities defied by the applicant for which the observations regarding so called indiscipline and subordination were made, putting the entire career of the applicant at great risk…”

Chaturvedi had stated that “these orders have not only tried to taint the unblemished and outstanding service record of the applicant, for which he was even conferred prestigious Ramon Magsaysay Award being the youngest civil servant to get this award”, but had also placed him at a very disadvantageous position regarding the future periodical review of his service record, also for his selection to sensitive posts and his impending promotion.

The officer has had run-ins with the Haryana government, the AIIMS administration and the Modi government because of his ability to speak up against corruption. He had also charged that Nadda, Misra and the deputy director (administration) of AIIMS, V. Srinivas, were targeting him because of “extreme personal mala fide” for “exposing their corruption by the applicant, the most immediate provocation being the affidavit filed by the applicant against the respondents, on 05.01.2016 before Hon’ble Delhi High Court in CWP-1815/2015 (regarding corruption cases of AIIMS)”.

Chaturvedi had stated that the affidavit had contained a recent report of the Central Bureau of Investigation which had specifically indicted Misra “for his corrupt role in purchases of trauma center of the institute”.

Similarly, Chaturvedi had charged before the CAG that Nadda, “even before assuming the charge of President, AIIMS”, was persistently writing not only for his removal as chief vigilance officer of AIIMS, but “also for action against him and most outrageously for halting all the corruption related enquiries initiated by him, and in all his letters, written for the said purpose he not only concealed all the statutory approvals for appointment of applicant as CVO but also commitment given to the parliamentary committee by Health Ministry for the same, though he himself was a member of the committee”.

In the past two years, Chaturvedi said, these “respondents have been repeatedly indicted not only by CBI but also by Parliamentary Committee and proceedings against them are pending before Delhi High Court and in lower courts against their corrupt acts”.