Sangrur: Simranjit Mann’s Victory Is a Blow Not Just to AAP But Also BJP's Hindutva Agenda

Though the SAD (Amritsar) leader has earned a reputation as a Sikh hardliner, he has repeatedly accused the BJP and RSS of trying to marginalise all minority communities. 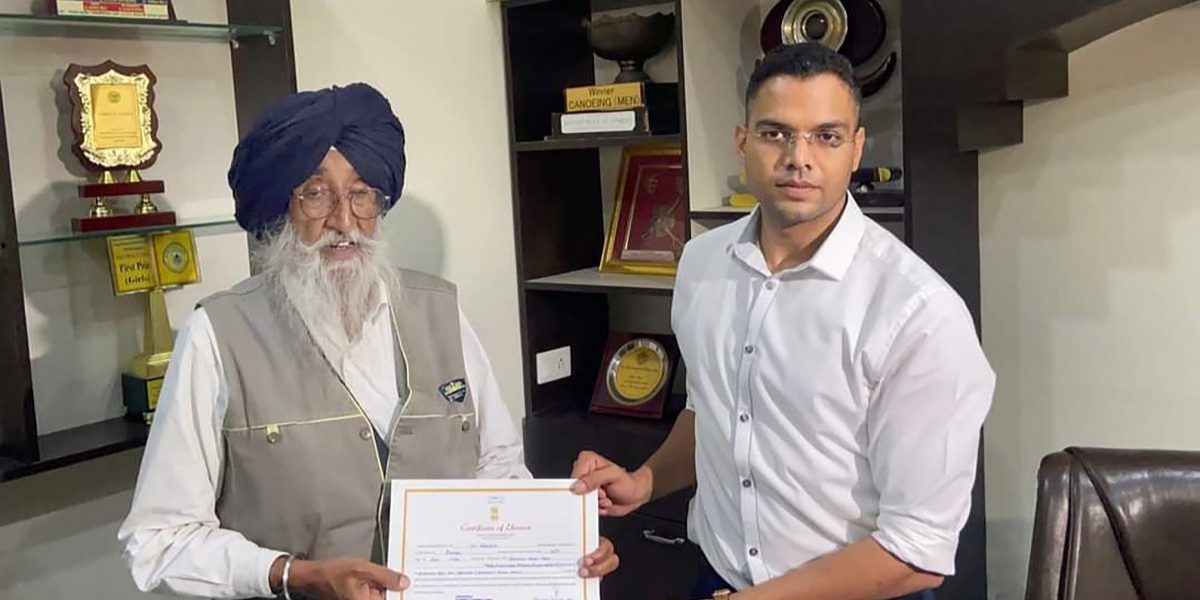 New Delhi: There is much more to the victory of Shiromani Akali Dal (Amritsar) chief Simranjit Singh Mann in the by-election for the Sangrur Lok Sabha seat in Punjab than the mere defeat of the newly-elected Aam Admi Party (AAP).

Let us look at the narratives that Mann set during the election campaign and also his quick assertions at a press briefing after the results of the by-election were announced on Sunday afternoon. When asked to express his immediate feeling after the victory, he accused the “Indian government” of “pressuring the Indian media” not to publish his statements during the election campaign.

He also mentioned the Rashtriya Swayamsevak Sangh (RSS), adding, “This victory has pushed all of them including the Congress, the BJP and its RSS and AAP to the corner.”

“This Hindutva government knows nothing about the Army. Why doesn’t [Prime Minister Narendra] Modi not retrieve the 900 square kilometres of our land that has been taken over by China in Ladakh?” he said, in response to a question about the issues he would take up in parliament.

He also mentioned the attacks on the Muslim community and said that the minorities were not safe in the country. He also promised to raise his voice in support of opening the Indo-Pak border at Wagah. “Pakistan falls short of wheat and it costs Rs 9,000 per quintal in Iran. That also needed to be realised,” he said.

Mann does not consider AAP his only rival. Asked if a fall in the AAP’s graph led to his victory, he said it were the efforts of his party cadres and the “direction given by Jarnail Singh Bhindrawale” (the slain Sikh separatist leader killed in Operation Blue Star) that resulted in his victory. 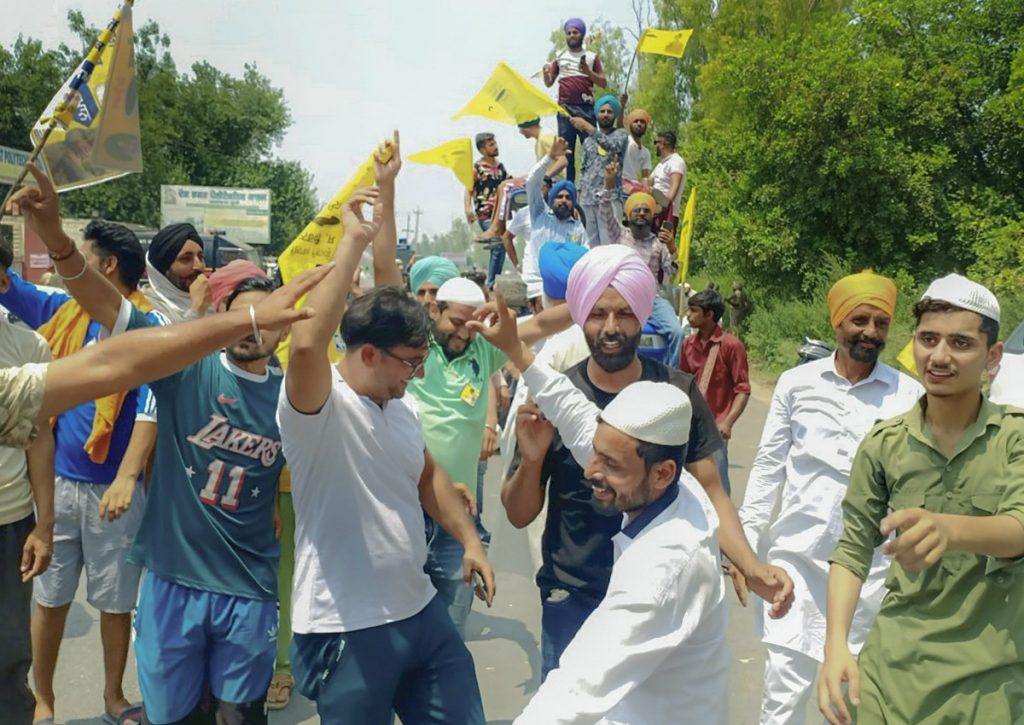 However, he was cautious not to talk of a separate Sikh state or Khalistan during his campaign. The national TV channels still dubbed him as an icon of Khalistan, based on his past record. His main poll plank was the demand to release the Sikh prisoners who were arrested during Punjab’s militancy phase, more than two decades ago.

“Our agenda in this election is the release of the Sikh prisoners who are languishing in jail for 30 years, and secondly the Sikh religion has been desecrated too much during the Badals’ regime in Punjab and (thirdly) the unconstitutional step (of the Modi government) of empowering the Border Security Force (BSF) by increasing its jurisdiction along the border by 50 kilometres into the state and this violates our constitution that mandates law and order as a state subject,” Mann told a BBC correspondent in an interview during the election campaign.

The Badal-led Shiromani Akali Dal tried to counter Mann by fielding Balwant Singh Rajoana’s sister Kamaldeep Kaur. Rajoana was convicted for the assassination of Punjab chief minister Beant Singh in a deadly bomb blast on August 31, 1995 and then sentenced to death on August 1, 2007 by a special CBI court in Chandigarh. On May 2, 2022, the Supreme Court had directed the Union government to decide within two months the Rajoana’s plea that his death penalty be commuted to life imprisonment on ground of his long incarceration of nearly 26 years.

But the move did not bear fruit.

Of the total nine assembly segments – Dhuri, Lehra, Barnala, Sangrur, Bhadaur, Dirhba, Sunam, Malerkotla and Mehal Kalan – in the Sangrur Parliamentary constituency, Mann had the biggest lead over his nearest rival Gurmail Singh of AAP in Muslim-majority Malerkotla. His overall victory margin was 5,822 votes more than the AAP candidate.

On the penultimate day of the election campaign on June 20, Mann began his speech in Malerkotla by greeting the masses with “As-salamu alaykum” and “Waheguruji ka Khalsa, Waheguruji ki Fateh” and stated that the RSS and its Hindutva agenda creates fear in the minds of the minorities to an extent that the Sikhs and the Muslims were now reluctant to greet people in their own religious way.

He touched the Muslims’ chord by saying, “This (Malerkotla) is the city of the Muslims and I was observing here that some Muslims were busy in their own acts during the time of the ‘namaaz’. I don’t like this because you should stick to namaaz at the time of your prayers.”

“I ask Modi, how is it possible that the comments of blasphemy by the BJP’s one ‘madam Sharma’ were made in her individual capacity. You (Modi) have a scheme to assimilate the minorities into Hinduism and this is the conspiracy of the RSS, because three days back Amit Shah gave statement that the government would re-write history and the Mughal raj wouldn’t be visible in history,” Mann echoed from the stage at his Malerkotla election rally,

He also spoke about the demolition of houses of Muslims in UP following the protests against the Prophet Muhammad remarks. “You tell me now that when our constitution permits us to express our grief, why are the houses of the Muslims razed to ground?” he asked.

He kept attacking the RSS and the BJP throughout, also mentioning the “killings of Kashmiri Muslims in fake encounters”.

His tweet after the result was, however, straightforward. “I am grateful to our voters of Sangrur for having elected me as your representative in parliament. I will work hard to ameliorate the sufferings of our farmers, farm-labour, traders and everyone in my constituency,” he said.

Moosewala and the farmers’ protest

Within two hours of the election results, the Union government imposed a ban on the slain Punjabi singer Sidhu Moosewala’s song ‘SYL’, which advocated Punjab’s rights over its river waters. Moosewala’s songs – which spoke about Punjab – and his killing were a big election issue in Sangrur. Moosewala also actively participated in the farmers’ agitation, releasing songs of rebellion along with other popular singers from Punjab and Haryana.

Even as this move received strong criticism on social media for restricting free speech, the next day (June 27), the Twitter accounts @kisanektamorcha and @tractor2twitter were also blocked. Twitter said the accounts were withheld to comply with India’s laws, i.e. the Information Technology Act, 2000.

Harinder Happy of the Sanyukt Kisan Morcha, who was instrumental in handling the media during the farmers’ movement, told me, “This ban on our Twitter handle @kisanektamorcha, as I see to it, is part of the Modi government’s broad-based strategy to block every voice of dissent and every kind of opposition across the country. The blockade of the @tractor2twitter handle and the ban on the Moosewala song is also a part of this drive. These voices are opposing the Modi government’s moves – whether the arrest of activist Teesta Setalvad or other human rights violations.”

During the farmers’ protest, different farmer union factions and also students’ organisations and civil liberties groups with varied ideologies had joined hands to give a united fight against the three farm laws. Eventually, the government was forced to withdraw the laws.

Tens of thousands of Sikh peasant families from the Sangrur parliamentary constituency also played their part in strengthening the ‘kisan andolan morcha’ at the Tikri border, which formed a 21-km long beeline of tractors on the Delhi-Rohtak national highway. The Muslims of Malerkotla had organised community kitchens at the Sighu border protest site.

The Sikh hardliners at the farmers’ protest had also come to the fore, raising the pitch for “the autonomous rights of Punjab”. Amongst the most vocal in this regard included Deep Sidhu, who had just started campaigning for Simranjit Singh Mann before his untimely death in a road accident. It was also reported that Moosewala would join Mann’s election campaign before his killing.

Simranjit Singh Mann, as a baptised Sikh, insisted on entering the Lok Sabha with his three-foot kirpan (sword) after his election in 1990. His demanded was turned down and he subsequently resigned in protest. He was elected again to the Lok Sabha in 1999 and was then awarded best parliamentarian during his second tenure. Whether he will once again seek permission to carry the kirpan remains to be seen.

The entire episode of the Sangrur parliamentary by-election has underlined one thing: that the people of Punjab could still opt for a strong narrative that counters the Modi regime’s Hindutva agenda.