While official detention orders may not have been issued, security officers deployed to monitor the politicians have been asked to restrict their movements. 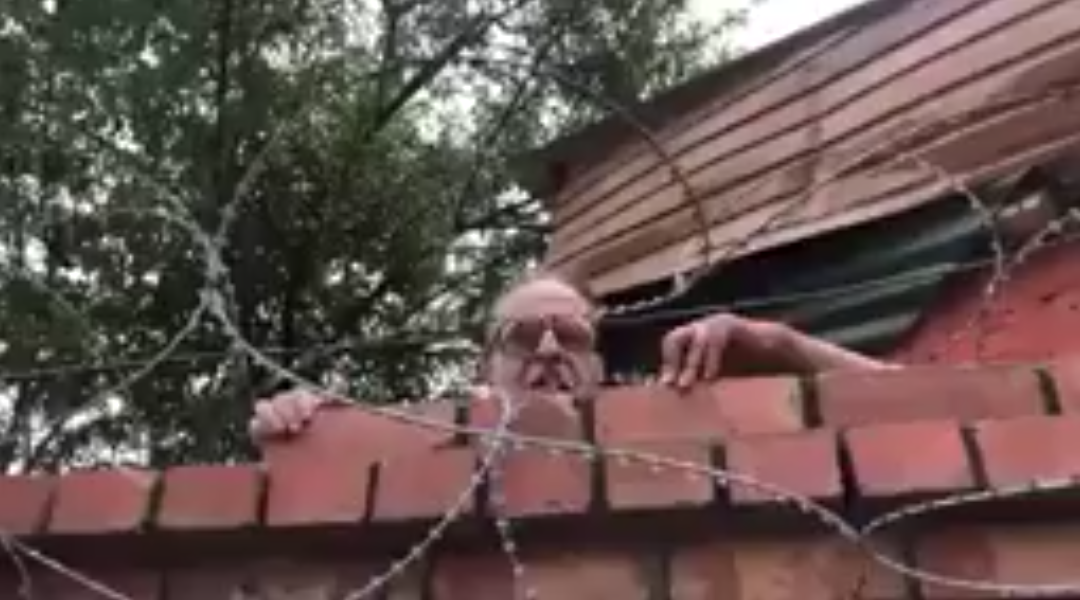 Saifuddin Soz speaking to reporters from the wall of his residence.

Srinagar: On Thursday, senior Congress leader Saifuddin Soz scaled the boundary wall of his residence in the summer capital Srinagar to “prove” that he was not a free man, but kept under “illegal house detention”.

A few policemen tried to stop him. Then, there was a loud shout. A man in civvies, apparently a police officer, grabbed one hand of the 83-year-old former Union minister and ex-J&K Congress chief, and whisked him away.

“Don’t touch me, don’t touch me,” Soz repeatedly yelled at the officer, from behind the boundary wall. “This is my house, get out of here.”

The high drama unfolded in broad daylight as police did not allow Soz to even come out of his residence, just outside the Srinagar airport, to speak to the media.

This is a man whom the government had just described before a bench of the Supreme Court as a free person who was not under any form of detention.

‘They lied in the Supreme Court’

“Did you see how they stopped me from speaking to the media so that the world would know about their lies in the Supreme Court that I was not under house arrest?” Soz asked The Wire.

It was the J&K administration’s affidavit in the apex court that led to Soz, usually a man of few words, losing his cool.

On Tuesday, the J&K administration told Supreme Court that Soz “is free and not under detention”. “He was never detained nor (is he) under house arrest. There are no restrictions on his movement subject to security clearance which is contingent upon law and order and security situation of that area,” the J&K government submitted before the court.

To support its claim, the administration submitted before the court that Soz had travelled out of J&K at least twice by air in October and December last year.

The affidavit, filed by the J&K home department, also called the habeas corpus petition by his wife, Mumtaz-un-Nisa Soz, seeking his release “false and baseless”.

The top court, while hearing the petition, accepted the administration’s statement and closed the case.

“The government told the Supreme Court that I am a free person. If I’m a free person, why am I not being allowed to move out of my residence? The police personnel stationed here say that they have orders from higher-ups to prevent me from stepping out,” said Soz.

‘Travelled to Delhi for medical check’

The Congress leader, however, admitted that he left his residence twice – once to see his ailing sister and the other time to travel to Delhi for a medical checkup.

“But each time, I had to first obtain proper permission from the administration,” he said. “It was only after the permission was granted that I was allowed to leave.”

National Conference vice-president and former chief minister Omar Abdullah took to Twitter to defend Soz. He said the Congress leader was given permission to travel to Delhi after an intervention from his cardiologist.

The moment he returned to Srinagar he was detained again & I’m sure when his case comes up in the High Court the government will claim he’s not detained. It’s very convenient because there are no formal detention papers, just instructions to the police at the gate.

Abdullah himself was released after several months of detention earlier this month.

Soz said he will knock on the doors of the court again, and challenge the government’s “false claims”.

“I am surprised how the court accepted what was told to it,” Soz said. ”After all this, it is for the Supreme Court now to decide what is true and what is untrue.”

‘What is the security drill?’

As Soz’s statement about the “government lies” hogged headlines, principal secretary, J&K information department, Rohit Kansal took to Twitter to reiterate the government stand that the Congress leader was not under house arrest.

Mr. Saiffudin Soz former MP and Minister not under arrest or detention. He has been to Delhi twice- in October and December. Free to go wherever he likes with usual security drill. No question of lying in Hon SC @diprjk

Kansal’s statement drew a sharp reaction from Abdullah. “I’m sorry Rohit but it’s better to let the official twitter handles put out the propaganda. I’ve worked closely with you & it’s disappointing to see your handle put out this tweet,” he said.

He then questioned Kansal on his “security drill” comment. “Incidentally what’s the security drill? Would you care to elaborate? Does he need permission every time he wants to leave his house?”

Dozens of politicians including three former chief ministers of J&K were detained as part of the curbs enforced on August 5 last year – when the Centre read down J&K’s special status and bifurcated the erstwhile state into two union territories.

J&K political parties have said that in most cases, there have been no formal detention orders issued by the J&K administration. But, they said, security officer deployed with the politicians have been directed to restrict their movements.

“The claims of the government in the Supreme Court about Professor Soz are a glaring example of the lies of the BJP-led government,” said CPI(M) leader M.Y. Tarigami.

He said last year, the government in the Supreme Court lied about his house detention as well. “The case is still pending in the apex court. Restrictions on Prof Soz and other political leaders must be withdrawn,” Tarigami said.

“Soz Sahib’s plight is not unique. @JKNC has gone to court because more than 15 of our colleagues are similarly illegally detained & I have no doubt the administration will claim they aren’t detained,” wrote Omar on Twitter.

The administration informed the court that the trio was free following, which the court dismissed the petition by the three politicians challenging their house arrest.