Beyond the Pilot-Gehlot Row, Rajasthan Congress's Struggles Are Far From Over

Pilot and his supporters have a strong base in the state's eastern region, where the BJP performed very poorly in the last assembly polls. 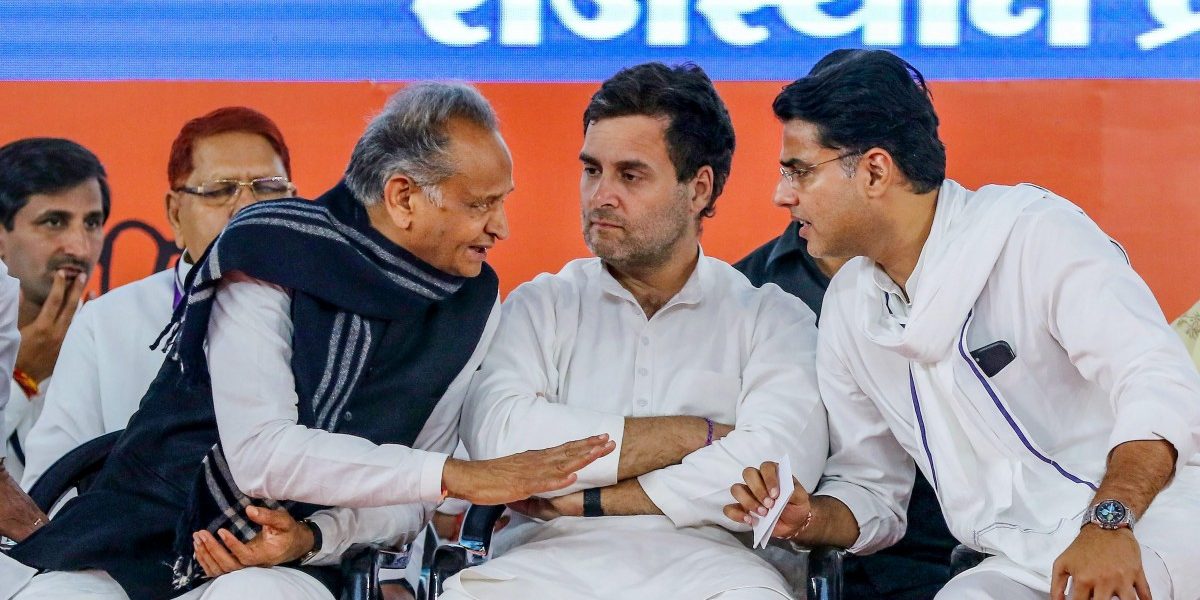 Jaipur: On Wednesday morning, rebel Congress leader Sachin Pilot came on the record to say that he was not joining the Bharatiya Janata Party, and that his grievances are solely against Rajasthan chief minister Ashok Gehlot’s highhandedness.

His statement came after days of speculations by both his supporters and the Congress leadership that he was “actively talking” to the BJP to pull the rug from under Gehlot’s feet. The former deputy chief minister of Rajasthan had added fuel to the unconfirmed reports by staying away from speaking directly to the media.

His statement on Wednesday, and almost simultaneous cancellation of the scheduled BJP meeting at 11 am in Jaipur under the leadership of former chief minister Vasundhara Raje Scindia, indicates that Gehlot may have staved off the scare as of now. Swift thinking on the part of the chief minister and the Congress to get the speaker, C.P. Joshi, to issue show-cause notices to the rebel MLAs in support of Pilot seems to have forced Pilot to take a step back.

It has already been confirmed that Pilot had far fewer than the 30 MLAs that he claimed to have had in his camp. His ill-timed rebellion had also increased the risk of disqualification for even those who stayed with him through this showdown. BJP leaders, who had been welcoming Pilot into their organisation until Tuesday, are now back to their “wait-and-watch” stance, leaving Pilot with nowhere to go.

The leader of opposition in the assembly, Gulab Chand Kataria, who had indicated that his party may demand a trust vote on the floor of the assembly soon, backtracked on Wednesday morning and categorically said that the BJP had no such immediate plans. Not surprisingly, Pilot this morning asserted that he was still a Congress member and will chart his future course of action soon.

Gehlot, on the other hand, managed to keep his flock together like a seasoned politician. He has a majority of the MLAs on his side, and in the face of possible disqualification of the rebel MLAs, should be able to win the trust vote if it is forced on his government.

However, beyond the Gehlot-Pilot showdown, what went unnoticed is the implosion within the Congress rank and file in Rajasthan. Large-scale resignations, rebellion by influential leaders, and polarised opinions in the last few days have left the grand old party in a delicate balance, waiting to implode again.

Congress’s hold over eastern Rajasthan likely to be hit

Despite saving face, the Gehlot government is likely to be significantly hit by the dissidence of influential leaders other than Pilot.

The decision to sack Sachin Pilot along with two cabinet ministers, who are known to have a command over a significant part of Rajasthan, will likely bleed the party as far as the state’s political dynamics are concerned.

Tuesday witnessed intense protests against Gehlot in the Gurjar-Meena dominated regions of Eastern Rajasthan, with several Pilot supporters coming out on the roads and burning Gehlot and other Congress leaders’ effigies.

The Congress had performed fairly well in almost all the districts of the Eastern Rajasthan during the 2018 state assembly elections. The tally of this region was a dominant factor that helped the Congress topple the BJP.

The Eastern part of Rajasthan consists of Bharatpur, Dholpur, Karauli, Sawai Madhopur, Dausa, Tonk, Baran and Jhalawar. Remarkably, the BJP couldn’t win any seats in most of these districts in the last assembly elections.

Also read: Why the New Jobs for 15 Congress MLAs in Chhattisgarh Are Significant

Out of the total seven seats in Bharatpur, the Congress won four, leaving the rest for the Bahujan Samaj Party (2) and Rashtriya Lok Dal (1). Both the BSP and RLD candidates later merged with the Congress.

In Dholpur, the hometown of former chief minister Vasundhara Raje, the Congress managed to win three of the total four seats.

In Karauli, the Congress secured three of the total four seats in the district. The BSP had won the remaining seat, but its MLA Lakhan Singh joined the Congress.

Similarly, in Sawai Madhopur, the Congress won three of the four seats. The remaining seat was one by an independent candidate, Ramkesh.

In Dausa, which is a stronghold of the Pilot family as Sachin Pilot’s father Rajesh Pilot was an MP from here, the Congress pulled four of the total five seats, losing one to an independent.

In Tonk, where the BJP had fielded its lone Muslim candidate in the election, the Congress managed three out the four seats. Pilot was contesting from Tonk for the first time in the 2018 assembly elections. The remaining seat was won by BJP candidate Kanhaiya Lal.

In Baran again, the Congress won three seats, losing one to the BJP. Jhalawar is the only district in this region where the BJP could win all the four seats.

Although in a minority, the MLAs who supported Pilot are by no means any less significant. For a state where political dynamics rests on sensitive caste equations and patronage, the rebel MLAs could dislodge the Congress’s fine balance.

Vishvender Singh is an MLA from Deeg-Kumher in Rajasthan’s Bharatpur district. He was the tourism and devasthan minister in the Gehlot cabinet since 2018. Previously, he has been a three-time MP from Bharatpur – from the Janata Dal in 1989, and from the BJP in 1999 and 2004. He is also the son of the last Maharaja of Bharatpur and is quite popular in the region.

Ramesh Meena is an MLA from the Scheduled Tribe reserved seat of Sapotra in Rajasthan’s Karauli district. He was holding the food and civil supplies portfolio in the Gehlot cabinet before being sacked on Tuesday. Meena has been a part of the Congress since 2013 and holds considerable influence over the Scheduled Tribe votes. He became an MLA for the first time from Sapotra in 2008 on a Bahujan Samaj Party ticket. In 2013, he joined the Congress and became an MLA once again.

Deepender Shekhawat is an MLA from the Srimadhopur seat in Rajasthan’s Sikar. He was the assembly speaker in the year 2009. Shekhawat has considerable influence in Sikar. In the 2018 assembly polls, the Congress had won seven of the total eight seats in Sikar district, losing one to an independent. The BJP, despite an aggressive campaign in the region, couldn’t win any seats here.

Also read: The Congress Has Run Out of Ideas. A Return to Brahmin Identity Won’t Fix That.

Harish Meena, a retired IPS officer, has been an MP in 2014 on a BJP ticket. Ahead of the Rajasthan assembly polls, he joined the Congress and won the Deoli-Uniara seat in the Tonk district. The Gurjar and Meena communities in Rajasthan remain in opposition to each other over the former’s demand to be included in the Scheduled Tribe list. In Tonk, which has a considerable population of the two communities, Pilot, himself a Gurjar, launched Meena to satisfy both communities. The impact of this strategy was reflected in the votes secured by the Congress from Tonk.

Indraj Gurjar, 35, is a first-time MLA from Viratnagar in Jaipur. In his very first election, he had defeated two-time BJP MLA Phool Chand.

Bhanwar Lal Sharma is a seven-time MLA from Churu. He began his political career from the grassroots level as sarpanch in Churu and became a prominent figure of the Brahmin community. He has also been a cabinet minister.

Brijendra Singh Ola is an MLA from Jhunjhunu. He is the son of the popular Jat leader Chaudhary Sisram Ola. Gehlot is known to have sidelined the Jat community during his past tenures, which is why the community never supported him fully.

Mukesh Bhakar, 31, is an MLA from the Ladnun constituency in Nagau. He was the president of the Rajasthan Youth Congress but was removed from the position yesterday. Earlier, he had served as the NSUI president and had lost the students’ union election. Later, he mentored a woman candidate who was denied a ticket to contest the students’ union election and helped her win as an independent. Bhakar became popular in the region and managed to win the MLA seat.

Ramnivas Gawriya, 27, is the youngest MLA from Parbatsar in Nagaur. He had lost the students’ union election during his university days but managed to win the legislative election in the first go.

Hemaram Choudhary, a former cabinet minister in Rajasthan, has also been a six-time MLA from Gudamalani constituency in Barmer. Choudhary is a seasoned politician belonging to the Jat community. He was upset with Gehlot over not being given any ministerial portfolio this time.

Suresh Modi, 69, is a relatively new politician who begun his career in 2018 after being elected as MLA from the Neem ka Thana constituency in Sikar.

Zahida Khan is the first woman MLA from the Meo-Muslim community and enjoys popularity in the Mewat region. After securing votes even higher than those garnered by Gehlot, she was expecting a ministerial portfolio in the Gehlot cabinet, especially after the issue of cow vigilantes dominated the region.

Prithvi Raj Meena, MLA from Todabhim, a Scheduled Caste reserved seat in Karauli, had held Gehlot responsible for the loss suffered by the Congress in the 2019 Lok Sabha elections. He even demanded that Pilot replace Gehlot as chief minister.

Murari Lal Meena is an MLA from Dausa. He served as a PWD minister in Rajasthan and has been an MLA twice.

Gajraj Khatana is an MLA from Bandikui constituency in Dausa. Dausa has a considerable population of the Meena community but due to Pilot’s influence in the region, the Congress has good Gurjar support.

Elected representatives aside, as the news of the Congress removing Pilot from the position of deputy chief minister and Rajasthan Pradesh Congress Committee was made public, several Congress workers in the state tendered their resignation.

I tender my resignation as Coordinator, IT Cell – Rajasthan Pradesh Congress Committee

Congress President of the Pali district Chunnilal Chadwas also resigned from the post, stating that he is hurt by the undemocratic removal of Sachin Pilot as state unit chief.

Rajasthan: Congress district president of Pali, Chunnilal Chadwas, resigns from his post, says he is “hurt by the undemocratic removal of Sachin Pilot as state unit chief”. pic.twitter.com/Fa0fAzvnPd

There have also been reports of mass resignations of party workers across Rajasthan. While Gehlot may have done well to save his government from an imminent collapse, his real test will be to see how he reverses the evident damages and gets the Congress unit together in the days to come.