As Pilot's Conduct Earns Him Brownie Points, Gehlot Could Have to Come to a Compromise

Pilot has managed to maintain dignified silence in this tense period. Gehlot, on the other hand, has been vocal in his distrust and has called him names. 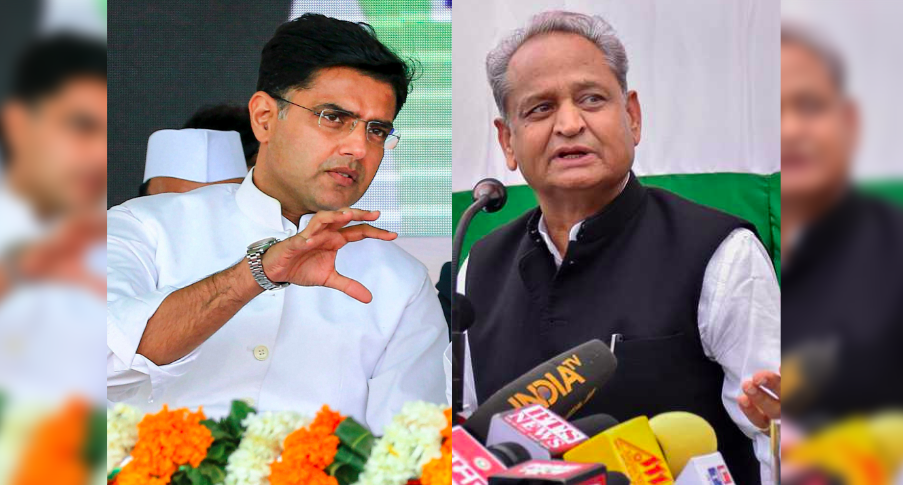 Jaipur: Rajasthan chief minister Ashok Gehlot may have been the steady ‘winner’ of the month-long political showdown between him and his former deputy Sachin Pilot, however, not all seems to be well for him right now.

Making headlines, late on Monday, Pilot met former Congress president Rahul Gandhi. The Gandhis’ underlining Pilot’s rebellion as a “grievance” is what signals trouble for Gehlot as his former deputy returns to the city he left nearly a month ago.

During the political impasse between the two, Gehlot had lost his calm and gone to the extent of calling Pilot ‘nikamma’ (‘useless’) and ‘nakara’ (‘good for nothing’). Upon his insistence, Pilot was sacked from the positions of deputy chief minister of the state and chief of Rajasthan Pradesh Congress Committee (PCC).

On the other hand, Pilot has managed to maintain dignified conduct during this tense period. From day one of the crisis, Pilot insisted that he would not leave the Congress party and claimed that his has no grudge against the party leadership. He even congratulated the newly appointed state Congress chief.

All this seems to have impressed the Gandhi family who then initiated the reconciliation with Pilot by sending senior Congress leader K.C. Venugopal to speak to the Gehlot camp MLAs in Jaisalmer, making sure to send Gehlot back to Jaipur while the talks were taking place.

The party’s subsequent announcement of constituting a three-member committee to address the issues raised by Pilot and the other rebel MLAs of Rajasthan and arrive at an appropriate resolution, is indication that Gehlot might have lost his purported ‘image’ before the Gandhis.

Just as Gandhis’ talk with Pilot was officially announced by the Congress party on Monday night, Pilot tweeted a thank you note to Sonia Gandhi, Priyanka Gandhi Vadra and Rahul Gandhi. However, Gehlot has been silent.

I thank Smt Sonia Ji, @RahulGandhi Ji, @priyankagandhi Ji & @INCIndia leaders for noting & addressing our grievances.I stand firm in my belief & will continue working for a better India, to deliver on promises made to the people of Rajasthan & protect democratic values we cherish pic.twitter.com/kzS4Qi1rnm

Political analysts in Rajasthan believe that the Gandhi family is not very happy with how Gehlot has been handling the crisis, and feel that he has been sending out an image of the party that is distinctly negative.

“Sachin Pilot has acted intelligently by not breaking the trust of the Gandhi family. It’s Gehlot who will now have to do the damage control,” said Rajendra Bora, a senior journalist and political analyst based in Jaipur.

The infighting within the Congress in Rajasthan has also highlighted the lack of capability in the senior leadership trusted with managing the state. This list of seniors includes Avinash Pandey, Randeep Surjewala and Ajay Maken, who seemingly failed in assessing the magnitude of the differences between Gehlot and Pilot.

“The Congress initially relied on Pandey, Surjewala and Maken to sort out the issues, but when they were also seen speaking in the tone of Gehlot, K.C. Venugopal was asked to intervene,” added Bora.

What now for Pilot?

While Pilot seems to have the upper hand at the moment, it remains to be seen if he will accept a position that the party would offer him in Rajasthan.

Pilot had held the ‘number two’ position in the state. With the comeback, he could well be looking for a more serious role.

There is already a new Rajasthan PCC chief in place who has replaced Pilot. The new appointee for this post, Govind Singh Dotasara, is a well known Gehlot loyalist and it is unlikely that Gehlot would let him go within few days of his appointment.

Also read: Rajasthan: Is a Compromise Between Ashok Gehlot and Sachin Pilot in the Offing?

The party could reinstate Pilot as deputy chief minister, assuring him that due importance would be given to his office, however, it seems improbable that Pilot, who gave a hard time to Gehlot while putting his own career at risk, would agree to the same old role in the party.

Another option, as speculated, could be assigning Pilot a role in the Congress at the central level. However, that would mean disappointing senior leaders who would not be willing to compromise.

Even Pilot seems reluctant to leave his base in Rajasthan. In his tweet after meeting with the Gandhis on Monday, he has mentioned that he would work for the people of Rajasthan. He returned to Jaipur today, August 11.

Still on the edge after only barely saving its government from being toppled by the Bharatiya Janata Party, the Congress is at a critical juncture and not in a position to take away the chief minister’s post from Gehlot, who enjoys the support of far more MLAs than Pilot.

During the crisis, Gehlot had been quite vocal about his differences with Pilot – some would say, too vocal. In case the Congress high command decides to make Pilot the chief minister, Gehlot would definitely not sit and watch.

The 18 Pilot-camp MLAs who stood by him during the crisis are also eyeing more advantageous positions in what could be a cabinet reshuffle.

While Congress has already committed to look out for Pilot and other rebel MLAs, accommodating their demands would upset the Gehlot loyalists who are more than 80 in number. This is, again, a big problem for Gehlot.

Analysts believe that the way Pilot is handling himself, he is unlikely to immediately accept just any position from the party.

“Pilot must have realised that there will be no point in going back to the deputy chief minister’s office with Gehlot as the chief minister. His case has grown even stronger because he has not asked for a position yet,” said Bora.