For the BJP, Sabarimala Is Not a Place of Worship But a Battleground 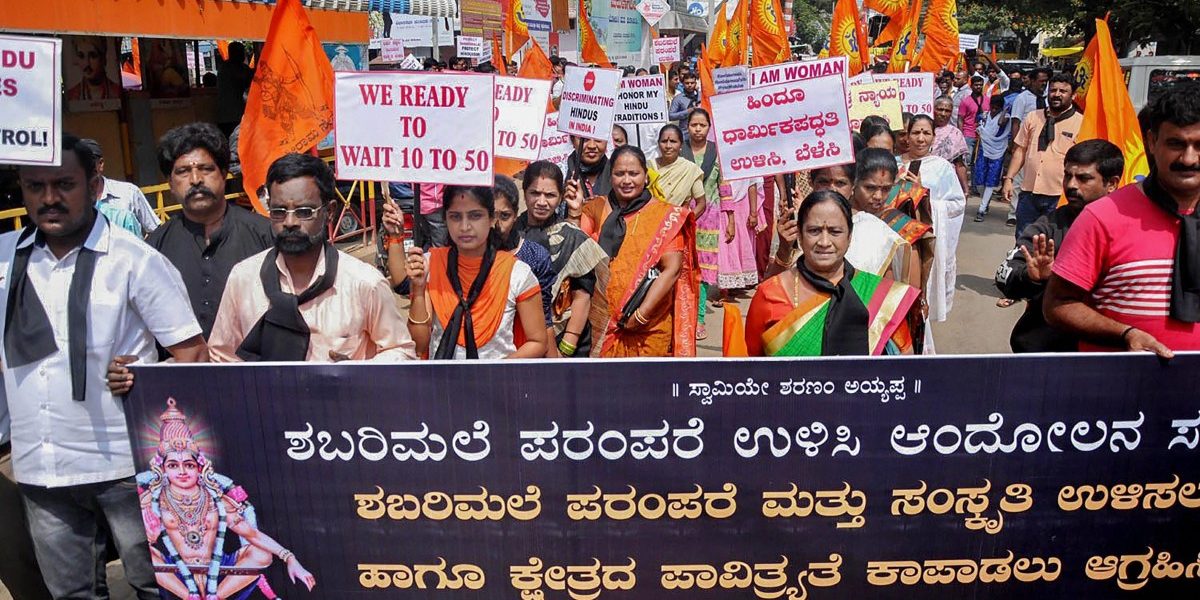 A protest against the Supreme Court's Sabarimala verdict in Chikmagalur on October 31. Credit: PTI

Despite the Rs 2900 crore, 182 metre statue of Patel dedicated to India’s unity, not a week passes when the nation is not split down the middle, quite bitterly. Sometimes, it is the lynching of Muslims or Aadhar’s intrusion into our privacy, ‘triple talaq’ or the national flag. The battle of Sabarimala is the latest on the list of rows.

The extensive media coverage notwithstanding, most people may be unaware of the issues central to the Sabarimala controversy. All they see is a large group of women (and men) fighting an obdurate patriarchy resisting the entry of women of all ages into the sacred temple. On the other side, they see a large number of women and men opposing the court-sanctioned right for women in the menstruating age to enter the temple.

Those unfamiliar with the Sabarimala mythology must know that Sabarimala is the name of a hill, and not a god. The god’s name in the narrative at hand is Sastha Ayyappan. Both appellations have interesting contexts to them. The first name – its full form Dharma-Sastha – is a Malayalam term used to refer to the Buddha. It’s widely believed that the original god was Buddhist. Even now, pilgrims in paying homage, chant ‘Sharanam’. The second name Ayyappan, is derived from Ayy, inspired by the oldest Dravidian tradition of Ayyanar, the popular Tamil folk god.

Ayyappan is represented as a thick moustachioed man, keeping vigil outside every village. Wielding an upright sword, he is seated on a horse. So non-Aryan is his lineage that none of the 18 Maha Puranas mention him. But there have been attempts to Brahmanise the tradition, as is evident from a local upa-purana called Bhootanatha-Upakhyanam, lauding his Mahatmya.

This semi-Brahmanised god of the Dravidians has also been appropriated by Nambudiri Brahmans, who entered Kerala in the eighth century. Their mission was to Sanskritise any and everything, from language and culture to temples and worship.

As legend goes, Ayyappan was born out of the union of Shiva and Vishnu, when the latter assumed the seductive feminine form of Mohini. We may recall this in this context Kerala’s famous Mohini Attam, which is recognised as a ‘national classical dance’. Ayyappan’s feats included defeating Mahishasuri, the buffalo demoness, and crushing the dacoit-king Udayanan.

The story goes on to narrate how Ayyappan led his troops in a victory march to Sabarimala temple, climbing the 18 holy steps. On approaching the idol, however, he was miraculously merged with Sastha. The Brahmanisation of Kerala’s most popular folk god was thus completed in one master-stroke. Many customs and rituals around Sastha-Ayyappan, though, still remain non-Sanskritic.

Each year, millions of devotees cutting across class and caste from Kerala and beyond assemble at the foot of the hills. From there, they begin the arduous trek to the temple. Entry is granted for a limited period. That Muslims and Christians are among the pilgrims testifies to the pilgrimage’s inclusive character. In fact, a respected Muslim deity called Vavar resides within the temple premises, to whom all devotees pray. Most pilgrims also make it a point to seek blessings at the nearby Arthunkal church.

Before the landmark Supreme Court verdict, only women above 50 years of age were allowed entry into the temple. Interestingly, a temple at Chengannur near Alapuzha in Kerala houses a goddess who has ‘regular periods’.

On September 28 this year, a five-member bench of the Supreme Court declared that women between 10 and 50 years cannot be barred from entering the temple. Such a ban, the court said, violates Article 25 of the Indian constitution. Surprisingly, Indu Malhotra, the sole woman judge on the bench, dissented with this majority decision.

Though widely welcomed, Sabarimala’s high priests – guruswamis – protested the court decision on the grounds that it violated tradition. Large numbers of Malayali women too protested the decision. They argued that the entry of “menstruating women” would corrupt the purity of Ayyappan, a naishitika brahmachari. Rationalists, however, observe that the same logic can be used to keep men out of the Kanyakumari temple as the devi is a virgin.

But their claim that this ban was always in effect flies in the face of history. Till the 1940s, women of all ages, if they could withstand the pilgrimage rigour, were allowed to enter the temple.

In 1950, a mysterious fire in the temple paved the way for the entry bar. Even then, women of all ages entered the temple, in small numbers. This continued even after 1965 when rules under the Kerala Hindu Places of Public Worship (Authorisation of Entry) were framed, prohibiting women of all ages from entering the temple.

The genesis of the row, however, can be traced to 1983 when a stone cross was discovered in that area. The Christian community had built a church at Nilakkal near the Mahadev temple. Pluralism and tolerance took a beating as mobs led by the temple priests fought with policemen. The Christian committee voluntarily removed the church.

The issue of women’s entry remained unresolved till as late as 1991. More than two decades later, the Supreme Court has reversed an earlier Kerala high court order retaining the ban. Notwithstanding the logic behind the decision, the court order has given the BJP a window to scramble into Kerala. The party’s attempts to enter Kerala’s political arena through the front door had come to nought.

Nominated Rajya Sabha member Swapan Dasupta has recently castigated the judiciary as “a self-perpetuating unelected oligarchy”. He criticised the Supreme Court for bowing to “cosmopolitan wisdom” and “the diktats of modernity”. The court has “mechanically directed radical change on a Hindu culture that is both eternal and constantly adaptive,” said Dasgupta. Delivering a veiled threat, the MP has held the court responsible for “a hardening of attitudes”.

Following the court’s order, the temple opened for just one week for its monthly worship. There will be a fresh challenge to implement the court order when the temple opens on November 6 and 7 for the Sree Chithra Atta Thirunal, and then again from November 16 to  December 27, for the Mandala Pooja. After a two-day break, the temple will remain open from December 30 to January 14 for the Makara Vilakku Mahotsavam.

Last week’s provocative statements by BJP leaders at Kannur, in the presence of party president Amit Shah, were aimed at riling up the party base. Shah publicly called upon party workers to defy India’s highest court. It may be argued that even more ominous have been the recent frequent references to Ayodhya. We can only pray that the Sabarimala temple issue is not turned into an ‘Ayodhya dispute of the South’.

The BJP must clarify to the people of Kerala and to the women of India its plans for Sabarimala – as the temple doors open in November. On the other hand, those determined to execute the order would do well to keep the BJP’s track record in mind. They must remember that the party will leave no stone unturned to use the Sabarimala row to its own electoral advantage.

Jawhar Sircar is a former secretary in the Union ministry of culture.