In an interview, the party's chief spokesperson Ruhullah Mehdi says local parties and people must act against the Centre's 'onslaught'.

Srinagar: On May 24, National Conference senior leader and former minister, Ruhullah Mehdi reacted sharply to an article written by party colleague Tanvir Sadiq, on the political roadmap ahead for Kashmir, which had skipped any reference to the dilution of Article 370.

On Twitter, he retorted, “‘Revisit’ domicile law? Lift curbs on Internet? …If I am not reading wrong, you are basically asking for 4G and THEIR ‘PERMISSION’ to let us start the political process? & then all is well?”

His remarks hogged the headlines, followed by media reports about a rift within the party ranks. In this interview with The Wire, Roohullah, a three-time legislator and National Conference’s chief spokesperson, argued the party should break the silence and speak on the centre’s August 5 decision on Kashmir and the subsequent development. An influential leader who has significant hold among the Shia population, Roohullah believes the assembly election should not be the immediate objective and the National Conference should start acting to counter Delhi’s “onslaught” on Kashmir. Edited excerpts from the interview.

You took strong exception to your party colleague’s newspaper article about the way forward for Kashmir. Why?

I was not at all comfortable with what he wrote. August 5, 2019 was an onslaught on the people of Jammu and Kashmir. We, as a party, have been professing the principle of autonomy and conditional accession to India, along with constitutional guarantees that were promised to us. If we have acceded to the Indian State, we have done so on the basis of these conditions.

The National Conference has been nourishing these principles all along. Whatever happened on August 5, 2019, was completely illegitimate, the murder of democracy, and the murder of these conditions. What I expect is that collectively, the political parties and the entire population of J&K should speak against it. But as a party, we have primary responsibility.

Whether we are liked or cursed, people have some expectations from the National Conference. All these months, we have maintained silence. But suddenly my colleague writes on the idea of reconciliation, doesn’t mention what happened on August 5 and doesn’t talk about what happened to Article 370. He talks about reconciliation on the Internet and domicile law. By talking about this kind of reconciliation, an impression is going out that we are giving up on Article 370 and we don’t even want to show our dissent. It means that we are accepting the post-August 5 arrangement. That led to my reaction.

But the party hasn’t cleared its stand on the issue.

People took his (Sadiq) views seriously because he is the political adviser (of Omar Abdullah). By that logic, I’m the chief spokesperson of the National Conference and my rebuttal to him is the statement of the party.

Has this statement hurt the party’s image?

Of course, it has. Being the political adviser, his statement was taken as the party line. It created confusion and misconception that it is the National Conference’s line. And that is why my reaction. 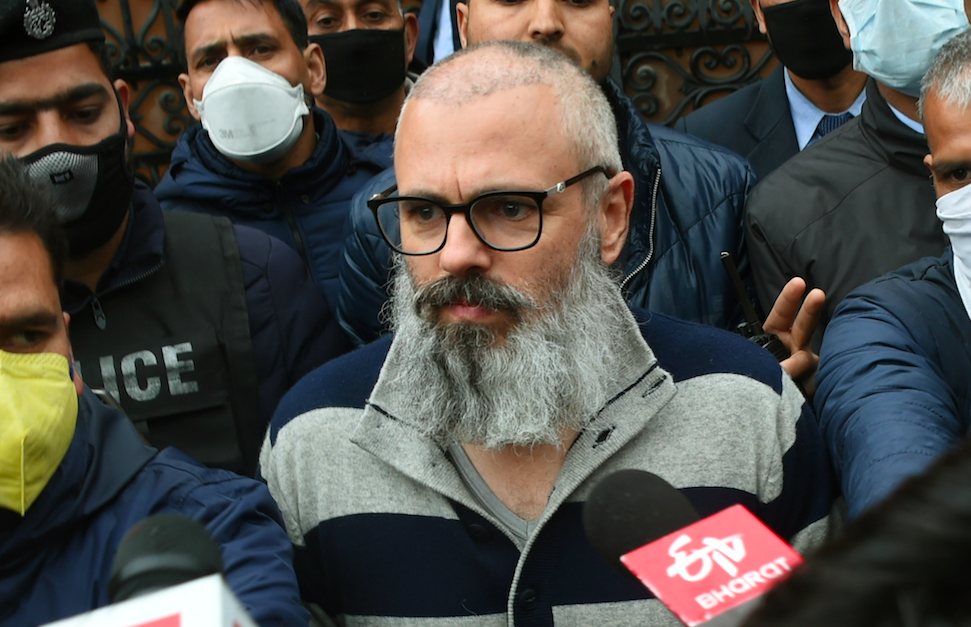 Did you take the issue up with the party leadership?

I did raise the matter with whosoever I had to. No one endorsed the view. Anyone who wants to express his view on Article 370 can speak. There is no diktat from the party that we can’t speak on the issue. Collectively, the party will decide the future course of action after the working committee meets.

Also Read: With One Lockdown After Another, J&K’s Economy is Shuttered and Shattered

You have also spoken about the silence maintained by the National Conference on the revocation of J&K’s special status and the future course of action. Why, in your opinion, is the party silent on these issues?

I did speak on these issues in an individual capacity. The party gives a reason for maintaining silence. I partially agree with it but partially don’t. I agree we need the National Conference’s working committee to decide the future course of action. But I don’t agree that we need the working committee to give us the mandate to say whatever happened on August 5 was wrong, that it was the murder of democracy in J&K. It is simple.

The National Conference believes in Article 370 and autonomy. The committee has to define the future course of action, but we don’t need its approval to speak against the onslaught we were subjected to on August 5.

Are you worried about the silence maintained by the leadership on the August 5 development and the subsequent decisions by the Centre vis-à-vis Kashmir?

I agree. I’m, however, optimistic that the leadership stands by the principles that the party has professed all along. But this prolonged silence on the dilution of Article 370, which has its reasons, has created a space for misinterpretation. Our silence is proving damaging and counterproductive. The government of India is doing its job. They are actively implementing their ideology and their plans for Kashmir. They are having a free run as the field is open for them. Look at the anarchy in the state and the way the administration is functioning. There is a huge vacuum, amid which the other side is implementing every bit of its RSS ideology on Kashmir.

So, you mean this silence cannot be an answer to the “onslaught” by Delhi?

Silence is not the answer. Silence is only giving them more room and more opportunities to do whatever they want to do. They are going ahead with their business and there seems no one to stop them.

What should the party do in this scenario?

I personally believe we must start talking and acting, whatever the ways and means are. This is my personal opinion. We can’t afford to stay silent, given the unending onslaught.

You have also said you are ready to go to jail. What do you mean by that?

It has more to do with the circumstances that we are living in today. The other side is brutal to anyone who speaks. Let’s talk about the political process. What does it mean to him (Sadiq)? Does it mean only contesting elections and going to the secretariat and sitting in a chair? No. The political process is not only about elections. If you feel your only objective is elections, you need to go to Delhi and pray to them to start that process. 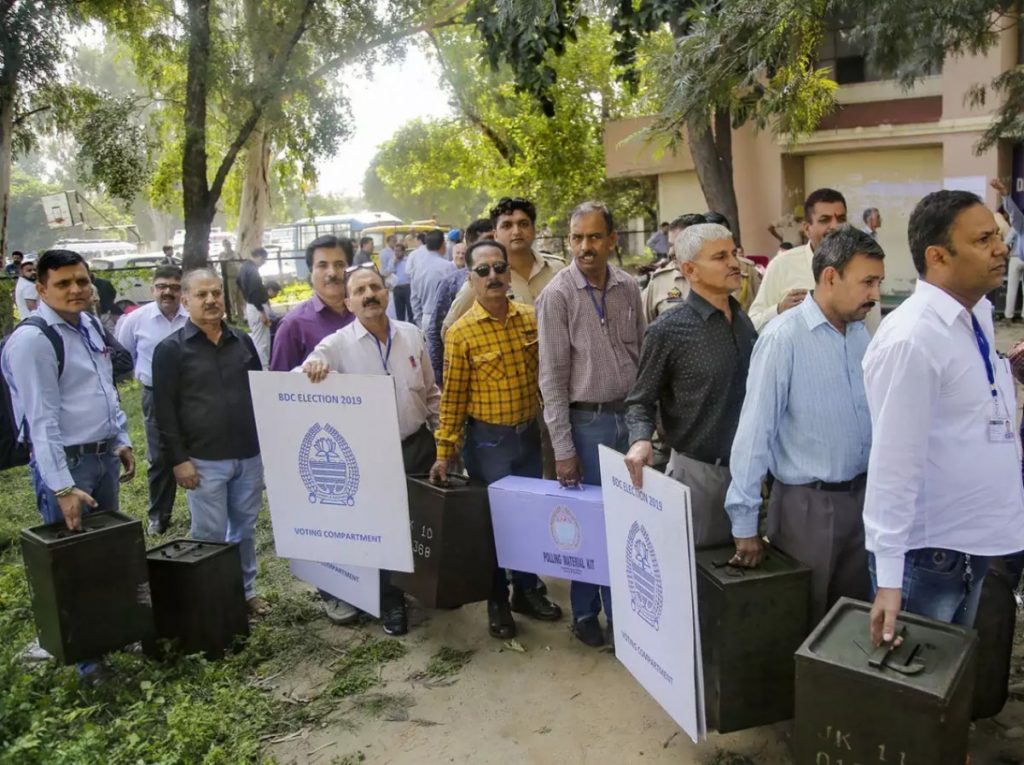 Election officials make preparations for polling at the BDC elections being held across 22 districts of Jammu and Kashmir. Photo: PTI

Do you fear raising your voice may land you in trouble?

These are not only fears but a reality. I’m also scared, but it depends on a person whether he will let these fears overtake his conscience and principles. There may be individuals who are silent because they genuinely feel that the regime in Delhi is brutal and they don’t tolerate any dissent. When you are a Kashmiri and a Muslim, the fear doubles, it becomes genuine.

Is this fear also holding back the party leadership from speaking?

No, that is not the case at all as far as the party leadership is concerned. They are genuinely waiting for party leaders who are in prison to be released.

Has this silence led to confusion within the party?

Individuals think and behave differently. There are individuals who are confused because of the prolonged silence and there are others who believe that the party leadership is waiting for the release of all senior political leaders.

Also Read: It’s Been 9 Months. What Did the Revocation of J&K’s Special Status Achieve?

Should National Conference participate in the J&K elections?

Elections should not be the immediate objective. Let’s first talk about what happened to the constitutional guarantees which were given to J&K and what happened on August 5. We should be focused on that.

What do you mean when you say the political process in Kashmir shouldn’t start on “their terms?”

When you talk about the reconciliation process and ask them (Delhi) to allow the process to start, it will be naturally on their terms, when you ask for their permission. And their terms are accepting the post-August 5 scenario and narrative. This should neither be the stand of the National Conference, nor any individual of J&K.

Why have you removed your designation as the National Conference’s chief spokesperson from your Twitter bio?

Should the National Conference be part of the delimitation exercise announced by the Centre?

This exercise is the mandate of the J&K assembly. Since the assembly doesn’t exist, this whole process is constitutionally incorrect.