Though it has still not made public any information to back Amit Shah's controversial claim that there is a bomb factory in every district of the poll-bound state. 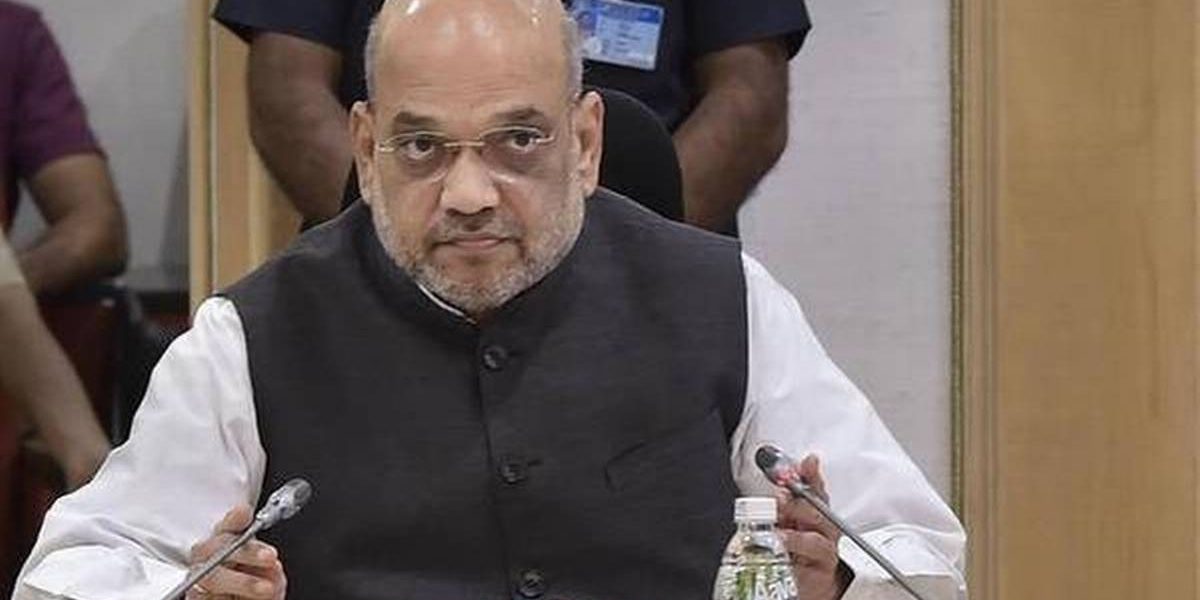 New Delhi: The Union home ministry on Thursday said that a reply it furnished in response to a Right to Information query on the presence of Khalistanis in the farmers’ protest was misrepresented by RTI activist Saket Gokhale in order to suggest the ministry had no data to back up home minister Amit Shah’s claims about ‘bomb making factories’ in West Bengal.

There have been some reports in the media quoting tweets of Shri Saket Gokhale about an RTI reply by MHA. Shri Gokhale has misrepresented the facts while tweeting with a malicious intention. pic.twitter.com/KfTAWNxLdD

On Wednesday, Gokhale tweeted a letter he received from the ministry on March 3, 2021 which said, without reference to any state, that the MHA did not have any such information as sought, and instead, advised him to reach out to the state authorities as ‘police’ and ‘public order’ are state subjects.

Gokhale claimed that this response was to the RTI application he filed on October 18, 2020 about the statement Amit Shah had made in a televised interview that there are “bomb-making factories in every district” of West Bengal. 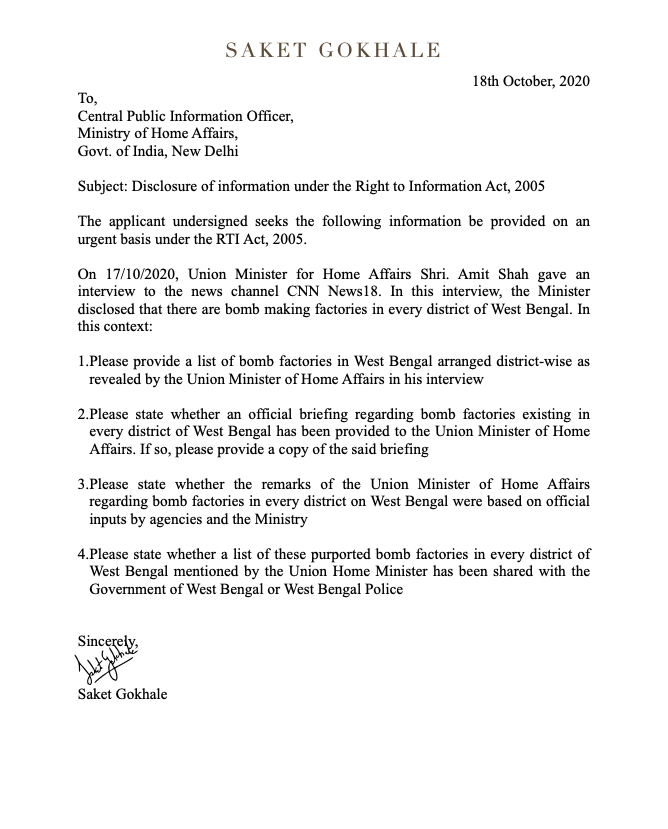 However, the home ministry spokesperson said that the officer whose reply Gokhale uploaded on Twitter was responding to an RTI request Gokhale had made in January 2021 on Khalistanis in the farmers’ protest and that the concerned officer had not even received the West Bengal-related RTI query.

But the ministry has yet to provide any of the information sought about Shah’s claim that there were bomb-making factories in every district of West Bengal.

Bengal is ruled by the Trinamool Congress, and in the coming assembly polls, the Bharatiya Janata Party has been keen to mobilise all strategy to wrest power.

In his RTI request, Gokhale had sought a district-wise breakup of bomb factories in West Bengal, and had asked whether the home ministry officially briefed Amit Shah regarding the bomb factories, whether Shah’s remarks were based on official records, and if the list of purported bomb factories has been shared with the West Bengal government or state police.

The MHA letter Gokhale uploaded noted that the information he sought was not available with the ministry and urged him to pursue the matter with the state’s police, presumably Punjab. 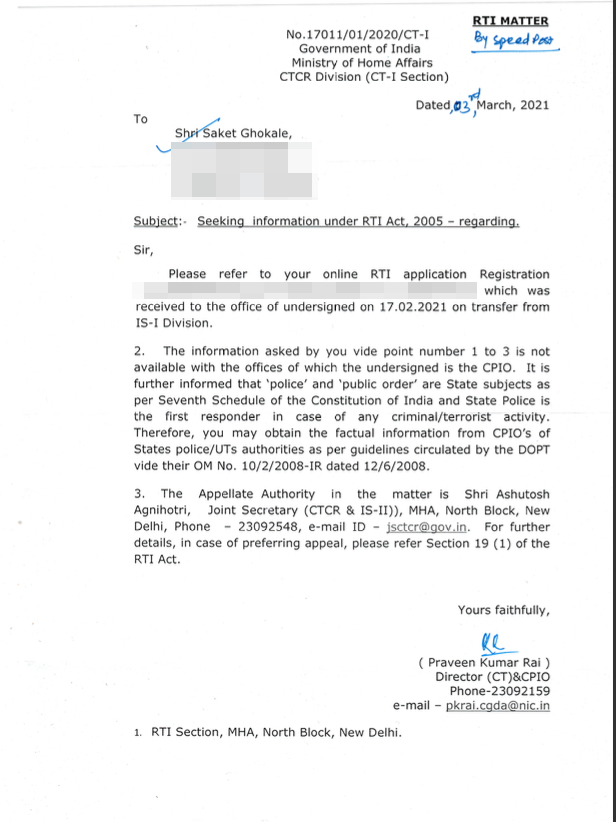 Based on this letter, Gokhale tweeted that the ministry had not been forthcoming in disclosing information at all. “Even [my] first appeal wasn’t responded to. An MHA official called me and said, “We’ve been told not to reply on this,” he tweeted.

The home ministry spokesperson accused Gokhale of acting “with an ulterior motive and malicious intent” and claimed he “deliberately obliterated reference no. of RTI reply, while linking this reply with his earlier application dt. 18/10/20”.

Asked about this charge, Gokhale told The Wire, “I always blank out file numbers because otherwise anyone can go to the RTI website and use that along with my email address to access a copy of my contact records/home address. And I’ve had a horrendous experience with that in the past.”

While he did not answer a specific question about the  blanked out date and file number, Gokhale said: “They claim this response is to a January 2021 RTI about Khalistanis at farmers protests. In which case, I’ve asked them to produce a copy of the RTI file about Shah’s statement which is much older (from Oct 2020). They claim they never received that RTI in one of their tweets. And I have copies to prove that not only did I file an RTI but also a 1st appeal and a legal notice sent via email and post.”

Shah’s charge of bomb-making in Bengal served as a lightning rod for BJP criticism of the Mamata Banerjee government.

In the aftermath of his claims in October 2020, BJP leaders had been keen to connect crude bomb explosions in various parts of West Bengal to the home minister’s claims. Bengal’s political landscape has been a violent once and the most recent example of this was in February when a bomb was hurled at TMC leader and state minister Jakir Hossain at a railway station in Murshidabad district, seriously injuring him.

BJP state president, Dilip Ghosh, in November 2020 had said, “Bomb manufacturing is the only industry here” and added that Mamata Banerjee had transformed Bengal into a “second Kashmir”.

Banerjee’s nephew and Diamond Harbour TMC MP Abhishek Banerjee had, in the meantime, said that it was ironic that the BJP government at the Centre had data on bomb-making units in Bengal but was clueless on statistics on migrant labourers.

“Ironic that Mr @AmitShah has found data on bomb factories, but when it comes to data on migrants, his @BJP4India govt is clueless! How dare you threaten the people of Bengal with President’s Rule to disturb our social harmony. Disgusting poll propaganda! #BengalRejectsTanaShah,” he had tweeted.

Note: This story has been edited and rewritten to incorporate the Ministry of Home Affairs’ response to Saket Gokhale’s original claim that the ministry had no information about bomb-making factories in West Bengal.