The Centre's affidavit also says that the matter of deportation is best left to the central government's discretion. 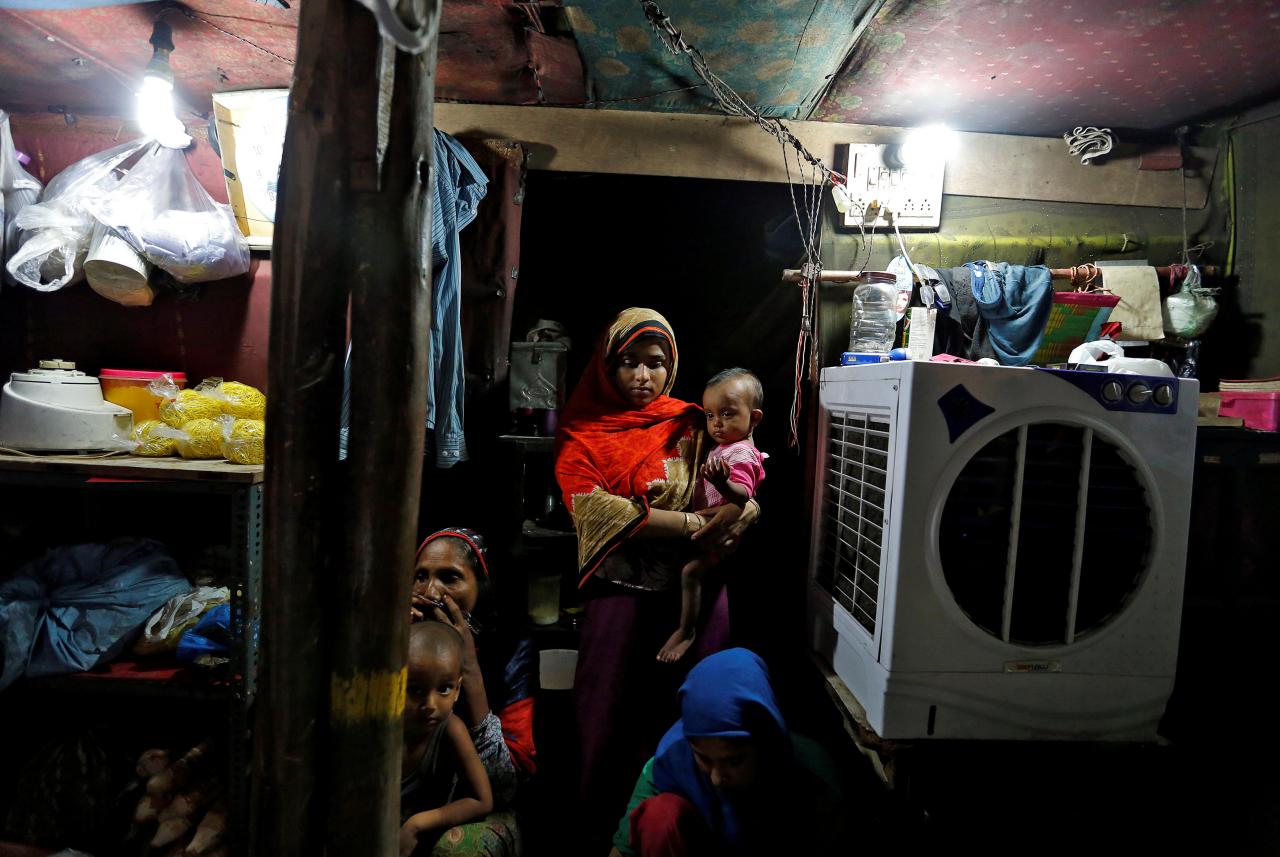 A family from the Rohingya community is pictured inside their shack at a camp in Delhi, India August 17, 2017. Credit: Reuters/Cathal McNaughton/File photo

New Delhi: In an affidavit filed by the Union home ministry in the Supreme Court on the deportation of Rohingya refugees, the Centre has said the decision on whether or not refugees are allowed to settle in the country is best left to the executive. It has also called the Rohingya people living in India “illegal”.

According to a report in the Indian Express, the Centre said, “As far as Rohingyas are concerned, they claimed to have entered from Myanmar using porous border between India and Myanmar. The total number of such illegal immigrants into our country would be more than 40,000 approximately as on date”.

These immigrants as well as others who may enter now are a national security threat for India, the Centre said according to ANI. It added there is an “organised network of touts operating in Myanmar and West Bengal and Tripura to facilitate the influx of illegal Rohingya” refugees into India. The Centre said many Rohingya have “illegally” got voter identity cards and PAN cards, and some are “using the ‘hawala’ route to raise money for illegal activities”, Times of India reported.

“There is serious national security threat/concern and when a just and fair procedure prescribed by law exist for deportation, this Hon’ble Court may decline its interference, leaving to the Central Government to exercise its essential executive function by way of a policy decision in larger interest of the country,” News18 quoted the affidavit as saying.

Also read: Despair and Desolation – Life in a Rohingya Refugee Camp in Delhi

“As evident from the constitutional guarantee flowing from Article 19 of the Constitution, the right to reside and settle in any part of the territory of India as well as right to move freely throughout the territory of India is available only to the citizens of India… No illegal immigrant can pray for a writ of this Court which directly or indirectly confer the fundamental rights in general…,” the affidavit also said.

The court had asked the Narendra Modi government to file an affidavit after two Rohingya refugees filed a plea asking the apex court to intervene and stay the deportation process. Taking into account the Centre’s submission, the court has adjourned the matter till October 3.

Whatever decision has to be made will be done by the court (SC). I think we should wait for court's decision: HM Rajnath Singh #Rohingyas pic.twitter.com/LZ3pXlATLi

Union minister of state for home Kiren Rijiju had told ANI earlier on Monday, “It is a sensitive matter. Whatever the government of India will do will be in the nation’s interest. Our way forward will be based on the nation’s interest and we’ll mention the same in our affidavit to be submitted in the Supreme Court.”

The plea against deportations was filed by Mohammad Salimullah and Mohammad Shaqir, both of whom are registered with the United Nations High Commissioner for Refugees (UNHCR). Their petition, based on international conventions and customary law, has been argued so far by senior advocates Fali Nariman, Kapil Sibal, Rajeev Dhawan, Colin Gonsalves, Ashwani Kumar and Prashant Bhushan.

Also read: Supreme Court Petitioners Must Be Made to Expunge Their Bigotry Against the Rohingya

The Centre claimed that India cannot be held to the provisions of the conventions mentioned by the refugees. “That the provisions of Convention Relating to the Status of Refugees, 1951 and Protocol Relating to the Status of Refugees, 1967 cannot be relied upon by the petitioner since India is not a signatory of either of them. It is respectfully submitted that the obligation concerning the prohibition of return/non-refoulement is a codified provision under the provisions of 1951 Convention referred to above. It is submitted that this obligation is binding only in respect of the States which are parties to the Convention. Since India is not a party to the said Convention, or the said Protocol, the obligations contained therein are not applicable to India,” the affidavit said.

The plea said that India has ratified and is a signatory to various conventions that recognise the principle of ‘non-refoulement’, which prohibits the deportation of refugees to a country where they may face threat to their lives.

The UN high commissioner for human rights, Zeid Ra’ad Al Hussein, had also slammed the Indian government’s stance, saying, “I deplore current measures in India to deport Rohingyas at a time of such violence against them in their country.” India had responded in the UN by saying that India was “perplexed at some of the observations made by the high commissioner in his oral update.”