A British Lesson in Tolerance for ‘Hindu’ India

Rishi Sunak's candidature for prime minister shows us how truly unenlightened the ‘world’s largest democracy’ is. 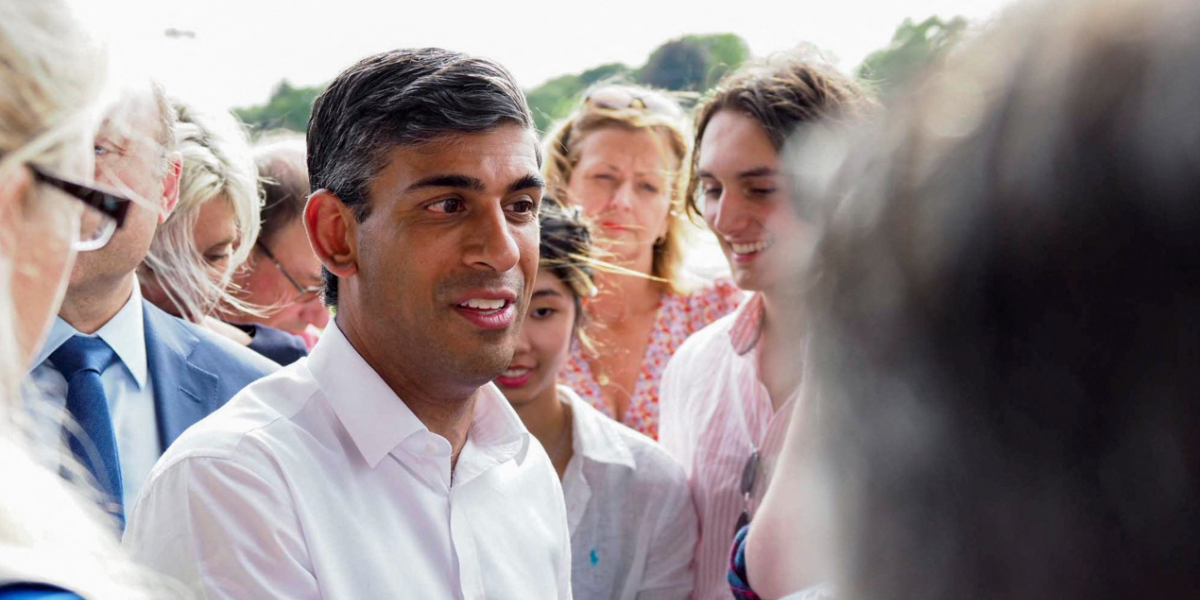 Britain's Rishi Sunak meets Tory members at Fontwell Park Racecourse as part of his campaign to be leader of the Conservative Party and the next prime minister, in Fontwell, Britain, July 30, 2022. Photo: Joe Sene/Pool via Reuters

Rishi Sunak, a British politician of Indian origin, is in the running to be prime minister of the United Kingdom, representing the Conservative Party. After Kamala Harris’s attempt to be the Democratic Party’s candidate for American president, he is the most recent offspring of Indian-origin settlers in the West to try to reach the political pinnacle.

Britain was once the colonial master of India. From an Indian point of view, the British prime minister is the historical political head of an empire of exploitation – and also, let us remember, an empire of reform. But for British colonial rule, and the rights-oriented struggle for freedom against it, India would not have become a democratic, constitutional republic in 1947, however loudly we claim that the roots of our democracy lie in our ancient structures, whether Hindu or Buddhist.

All major aspects of our freedom struggle and colonial life were linked to the British political system. Particularly from the beginning of the 20th century, agitating Indians considered the British prime minister the symbol of colonial rule, the man to revile or to appeal to.

Given this historical context, that a man of Indian origin stands a realistic chance of becoming the British prime minister shows how the world is changing. At a time when India is experiencing a form of Hindu-nationalist apartheid, Christian Britain is engaged with a prime ministerial candidate who has stated that his religion is Hinduism. As member of parliament (and later chancellor of the exchequer) he took his oath with the Bhagavad Gita.

Now the same Hindu Sunak wants to go to 10 Downing Street. Sunak’s wife, Akshata, is the daughter of Hindu Indian billionaires. Sunak’s wealth is, quite rightly, a point of public debate, since economic and social class have long been features of British politics. But his religion is resolutely not seen as relevant. This certainly points to a notable new level of multicultural tolerance among the British electorate and the political class. In this respect, I suspect Britain is certainly more secular and multicultural than America. If Kamala Harris had presented herself publicly as a Hindu, I suspect she may not have made it to the winning Democratic ticket.

Anglican Christianity is Britain’s state religion. Queen Elizabeth is the head of the Church of England. Yet Rishi Sunak’s desire to be prime minister is not seen as anomalous on grounds of religion.

Back in India, what do the Rashtriya Swayamsevak Sangh and the Bharatiya Janata Party think about this Indian-origin Hindu being accepted as a possible prime minister of Britain? After all, they have marginalised India’s Muslims and Christians with a shameless agenda of religious majoritarianism. There isn’t a single Muslim on the treasury benches of either house of parliament, nor is there one in the Indian cabinet. (Under Boris Johnson, Britain had more Muslims in its cabinet than India!)

The RSS/BJP forces constantly boast of Hinduism being the “vishwa guru”. RSS literature is full of attacks on British and also Christian civilisational history, both as crusaders and colonial expansionists. They claim that Hinduism is the most tolerant religion in the world, notwithstanding the caste hierarchy and atrocities on Dalits. And in their historical narrative, even native Indian Muslims and Christians are treated as enemies.

In Britain today, Hindus are a small minority – around 1.6% of the population – and comprise very recent migrants and their descendants. Yet “minority-ism” does not seem to play a major role in Britain’s democratic competition. In the India of the RSS/BJP – or even of the Congress in days gone by – a Muslim or a Christian would not have been accepted as prime ministerial candidate. So much for the tolerance of Hinduism.

Britain bestrode a Christian colonial empire. Yet that Britain now allows Sunak to compete for the top job. No British opposition leader or even his party’s own competitors for prime minister have raised the question of his religion. His wealth, yes. His attitude toward the working class, yes. And his wife’s tax avoidance, yes. All very good questions in a democracy. (These questions, by the way, are rarely asked in India.)

I am agnostic on the outcome of Sunak’s bid. But I do know this: Britain, the mother of parliamentary democracy, is teaching India an important lesson in tolerance and equality. But India, alas, is no longer a country that is allowed to learn.

Kancha Ilaiah Shepherd is a political theorist, social activist and author. He is the author of Why I Am Not a Hindu: A Shudra Critique of Hindutva Philosophy, Culture and Political Economy, and of Post-Hindu India: A Discourse in Dalit-Bahujan Socio-Spiritual and Scientific Revolution.