Injustice, Intolerance and Intimidation in the Making of a 'Hindu Rashtra'

The struggle to punish the killers of Pansare, Kalburgi and Dabholkar is linked to the struggle to preserve democracy in India, says Pansare's daughter-in-law. 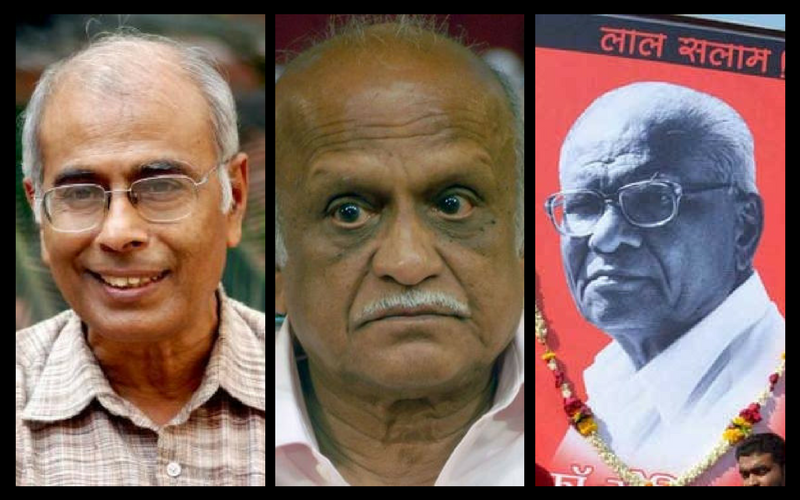 The veteran rationalist thinker, writer and communist leader Govind Pansare was brutally assassinated in Kolhapur on February 20, 2015. More than two years have passed, but justice remains elusive. The same is true for Narendra Dabholkar and M.M. Kalburgi, whose second death anniversary is three months away. All three men were also killed by right-wing fundamentalists.

The investigations into the assassinations have been very slow and have moved only because the Dabholkar and Pansare families have petitioned the high court to monitor the investigation. The police have managed to arrest only two suspects so far and two have been absconding. All the accused are associated with the radical Hindutva organisations Sanatan Sanstha and Hindu Janjagriti Samiti, with their totally unconstitutional agenda of establishing a ‘Hindu Rashtra’ in the country.

The chargesheets filed by the police in the Dabholkar and Pansare cases clearly mention that the accused are absconding since the Margao bomb explosion case in Goa in 2009. In spite of objections on the pressure tactics used by the lawyers of the accused and the spokespersons of Sanatan Sanstha, no action has been taken against them. The state government has not yet declared the absconding suspects as wanted in the Pansare case. The investigation officer is changed at every interval and the activists’ demand to hand over the case to a dedicated team for investigation is also pending with the government.

Fundamentalism has no religion

It is really painful to define ‘justice’ in cases where people are killed because their ideology and expression of thought are not acceptable to some. Regardless of political affiliation, the government seems to be insensitive in solving these crimes and punishing the guilty. Not even a single arrest has been made in Kalburgi’s case yet.

Fundamentalism and fanaticism is not a characteristic feature of any specific religion. Farook Hameed, a young activist of the Dravidar Viduthalai Kazhagam (DVK), was killed by Muslim fundamentalists on March 17, 2017 in Coimbatore, Tamil Nadu. The DVK is an offshoot of the Dravidar Kazhagam founded by Periyar in the 1940s and propagates atheism and rationalism. Being an atheist in individual life is something accepted by the society, but it seems one cannot propagate atheism the way others propagate a religious faith without risking one’s life. Farook openly expressed his ideology. He had posted comments about atheism, criticising religion and caste on his Facebook page. He was the administrator of a WhatsApp group called ‘Allah Murdad,’ meaning ‘There is no God’. The result: he was killed, reports say, by his own friends. Farook’s murder is in fact a threat to all Muslim youths who embrace atheism or even rationalism.

The Coimbatore incident is, in essence, no different from those where the victims belonged to the Hindu religion and were killed by Hindu fanatics.

The situation in India is growing more complex by the day. The space for free expression and freedom is shrinking rapidly. The fascist forces are trying to shut voices of freedom and we are compelled to fight the battle in the available space.

The campaign of returning awards by the writers and scientists brought the anxiety of intellectuals before society. They were concerned about everything that is going against the principle of equality, freedom of expression, cultural diversity and secular values in our nation. There have been three ‘yatras’, or journeys, of writers and poets to express solidarity with the families of Pansare, Dabholkar and Kalburgi so far. The first was a part of the Dakshinayan campaign in which 14 eminent writers from Gujarat visited Pune, Kolhapur and Dharwad, where the three rationalists were killed. Then a team of Marathi writers and activists followed the same route during their journey to Goa for a national conference in defence of freedom of expression held in November, 2016. In February 2017, 11 members of the Progressive Writers’ Association, Madhya Pradesh travelled to Maharashtra, Karnataka and Goa. They condemned the respective governments for failing to arrest the killers. Based on their dialogue with local people in these regions and their experiences, they will write books, plays and hold discussions to spread their thoughts across the Hindi speaking belt.

As the atmosphere of  fear and intimidation grows, hundreds of writers and artists visited the historical place of Dandi, Gujarat to hold a silent protest march on January 30, 2016 to commemorate the death anniversary of Mahatma Gandhi. A platform of collective voices of the left and Dalit movement was created in Mumbai Collective, while Delhi observed Pratirodh I and II with a clear stand to enjoy the right to dissent and free expression. The progressive forces in many towns, small and big, in the country have started organising programs like seminars, book publications and poetry recitations to protest against the attacks on women, minorities, progressive people and Dalit communities.

The atmosphere of fear exists, not only because of fundamentalist violence, but also because of the criminalisation of peaceful expression. Many have been attacked by the self-appointed nationalists and so-called religious people, while many from the minority communities, especially youth, have been arrested, held in pre-trial detention, and subjected to extensive criminal trials by the government machinery.

Fear of such repression, combined with uncertainty as to how the statutes will be applied, leads others to engage in self-censorship. State governments are using draconian laws such as the sedition provisions of the penal code, the criminal defamation law and laws dealing with hate speech to silence dissent. These laws have been repeatedly used for political purposes against critics.

There have been major attacks on free speech in the country from the government itself. The information and broadcasting ministry under the BJP government has become an image manager for Prime Minister Narendra Modi.  The government’s advisory to news channels not to telecast the Nirbhaya documentary and serving a legal notice to the BBC for airing the Nirbhaya film India’s Daughter, issuing show cause notices to channels on Yakub Memon’s execution coverage, banning a documentary on beef – all of this tell their own story. The BJP government has crushed the resistance of the students from the Film and Television Institute of India against the appointment of a pro-BJP director and has charged JNU students with sedition. It has appointed RSS affiliated people in various academic institutes. There have been cases of deaths of journalists, intellectuals, attacks, arrests, threats, sedition, defamation and censorship of films, broadcast media, print media, music, cyber media and hate speech. The attempt to impose a one-day ban on NDTV India, the filing of a complaint against an Outlook investigation on child trafficking in Assam, the trumped up cases against human rights activists in Bastar, are all attempts to silence the media and the voices of democratic dissent. Reporters covering the courts have been assaulted by lawyers, taken into police custody and their access to the courts restricted.

The time has come for thinkers, writers, poets, artists, scientists to overcome this feeling of intimidation and regenerate the society. Thinkers can become an explosive, powerful force. We have seen some examples in our freedom struggle, in Revolutionary Russia, Latin America and Africa. We have seen recently in India that the individual writers chose their timing of dissent in tandem with other fellow writers. Their act wasn’t solitary, but in solidarity with others.

At such a crucial time it will be unfortunate, if the real thinkers stop writing or speaking or expressing their views. The active thinkers can awaken society, create standards of morality, humanism and honesty and preserve them. The absence of thinkers causes civilisations to collapse. We have been observing this decay with our own eyes. The process of decaying has taken alarming speed. Make the people think aptly at individual, collective level and at the level of small groups is the first step.  To create a live internal debate is the second and going to the people and thinking together, is the third.

So, if now the government at the Centre says that people should sacrifice their desire for justice and truth in the national interest, in the name of nationalism and patriotism, it should be opposed. If there are forces, which declare that India will be a Hindu Rashtra by 2023 or 2025, they should be opposed. For this is a secular nation and will remain secular. This is a democratic nation and will remain so.

Megha Pansare is an assistant professor at Shivaji University, Kolhapur, where she teaches Russian. She is the daughter-in-law of Govind Pansare.