Rhinos to be Relocated to Two New Sites in West Bengal

Officials have identified two new sites for the greater one-horned rhinoceros in northern West Bengal to relieve two national parks with rhino populations beyond their capacity. 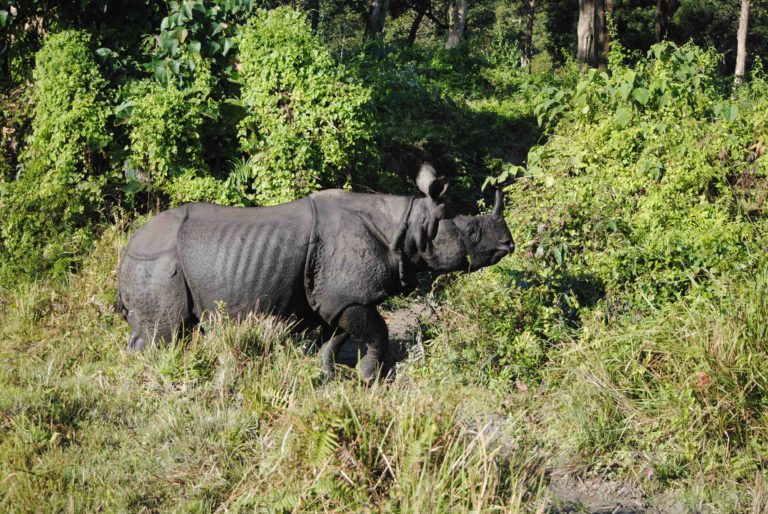 Officials have identified two new sites for the greater one-horned rhinoceros in northern West Bengal to relieve two national parks with rhino populations beyond their capacity. Kaziranga National Park is home to most of India’s rhinos. Credit: Udayan Dasgupta/Mongabay

The greater one-horned rhinoceros (Rhinoceros unicornis) in India is set to get two new homes in the state of West Bengal.

All of the 250 rhinos in West Bengal occur in just two parks — Jaldapara and Gorumara national parks — in the northern part of the state. Jaldapara is home to nearly 200 of these threatened animals and has the second-highest population of rhinos in India. Gorumara, located about 60 miles away from Jaldapara, hosts some 50 rhinos.

Forest officials claim that rhino numbers in the two parks have increased beyond the parks’ capacity, and some individuals need to be shifted to newer areas to ease the pressure.

“We have more than 255 rhinos in Jaldapara and Gorumara,” forest minister Barman told the Times of India. “The number is more than the carrying capacity of both parks. Hence, we are planning to relocate a few rhinos.” Once widespread, the greater one-horned rhinoceros has disappeared from much of its range, largely due to poaching for its horns and destruction of its habitat. About 3,500 greater one-horned rhinos are estimated to remain in India and Nepal today, with India hosting around 2,500 of these animals. But the rhino populations are concentrated in just a few protected areas.

In India, rhinos are currently found in three states: Assam, West Bengal and Uttar Pradesh. Their numbers seem to be growing, but their distribution remains highly restricted, conservationists say. More than 90% of the rhinos occur in a single park — Kaziranga national park in Assam — making this population especially vulnerable to catastrophes such as floods or disease outbreaks.

“It’s like keeping all your eggs in one basket,” Amit Sharma, WWF India’s senior coordinator for rhino conservation, told Mongabay. “If something happens to your population, it’s gone. Moreover, if you have a small and closed population, its genetic quality is likely to go down. So it is best if you spread out your rhino population, give them enough space or connectivity, so they can also have a healthy gene pool.”

Rhino numbers in West Bengal have been rising. A survey in 2015 found that the state’s rhino population increased from 20 individuals in 1990 to 250 animals in 2015.

At a meeting held at Jaldapara national park in November last year, the Asian Rhino Specialist Group under the International Union for Conservation of Nature urged governments and conservation groups to find new sites that could absorb the increasing rhino population. Conservationists discussed the need for increasing the genetic diversity of the rhino populations in Jaldapara and Gorumara national parks by allowing the exchange of healthy and breeding adult rhinos. They also floated the possibility of exchanging rhinos from other rhino bearing sites.

Proposals for setting up the new rhino areas have been sent to the central government, Barman told reporters. “Even though they have agreed on principle, we are waiting for the final nod,” he said.

While the increasing rhino population is good news, poaching continues to be a major threat in West Bengal. Over the past 18 months, for example, at least 11 rhinos have been killed in northern West Bengal, according to local media.

But incidents of poaching should not deter a rhino range expansion program, Sharma said. “You always have to think positive and take the best possible measures to try and secure a better future for the species.”

“In UP there is only one rhino population in Dudhwa national park, which was set up through a translocation exercise undertaken from Assam and Nepal,” Sharma said. “The present population there is around 30 and is mostly confined to one area and is assumed to be bred out of just one male probably affecting the genetic health of the population. To improve the genetic health and to have a new population, the UP forest department is planning to set up a new population in a separate area within the Dudhwa national park.”

Sharma added that since India’s rhino population is largely restricted to Kaziranga, people outside of Assam hardly know about the species. “So it is necessary that we introduce rhinos to new areas, so that people start loving the species,” he said.