Recent Spate of Statue Vandalism Gives Us a Perspective on Iconoclasm

Behind BJP leadership’s condemnation of vandals is the realisation that defacing statues is a throwback to the past’s rampant icon demolition. 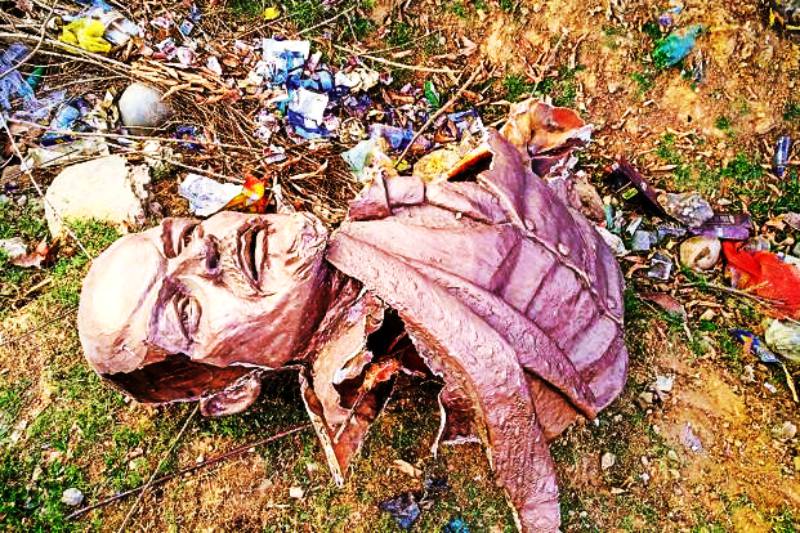 The Lenin statue brought down in Tripura. Credit: PTI

Prime Minister Narendra Modi’s outright condemnation of the recent desecration of statues of political icons was in sharp contrast to his habitual silence on the violence that inter-faith couples and Muslim cattle traders encounter. Their assailants, mostly from the Rashtriya Swayamsevak Sangh and its affiliates, have seldom been warned as the desecrators of statues were by Bharatiya Janata Party (BJP) president Amit Shah. He said, “Any person associated with the BJP, found to be involved with destroying any statue, will face severe action from the party.”

For the BJP, it was an ideological imperative to condemn statue vandalism because it has consistently railed against iconoclasm, depicted as a peculiarly Islamic political culture that Muslim rulers introduced in a tolerant, nonviolent Hindu India. Last week, this notion stood subliminally undermined with the desecration of statues of Vladimir Lenin, E.V.R. Ramasamy Periyar, Mahatma Gandhi, B.R. Ambedkar and S.P. Mookerjee.

If in a 21st century, democratic India, bound by the rule of law, the statue of Lenin can be bulldozed in a flush of electoral triumph of the BJP, it would seem incredible to expect a better, more civil behaviour from our ancestors who lived centuries ago. Yet this expectation is built into the BJP’s narrative that says Muslim rulers demolished temples and broke idols to humiliate the Hindus. Further, the bigoted behaviour of iconoclasts is linked to the Islamic prescription forbidding the worshipping of idols.

The recent incidents of desecration challenge the Sangh’s narrative on several counts. Those who destroyed the statue of Lenin were Hindu, as was BJP national secretary H. Raja, who posted on his Facebook page, “Today Lenin’s statue, tomorrow Tamil Nadu’s EVR Ramaswami’s statue.” One of the two who is alleged to have desecrated the statue of Periyar was also a Hindu.

Then again, the icons whose statues were disfigured were all born Hindu, though Ambedkar subsequently embraced Buddhism and Periyar grew up to become an atheist. By contrast, Gandhi was deeply religious; Mookerjee is a Hindutva icon. Religious motivation could have been at best a contributory factor in some of the incidents of desecration witnessed last week, as so many historians have argued was also the case with Muslim iconoclasm centuries ago.

The desecrations took place in the backdrop of the BJP’s sweeping victory in Tripura. A BJP functionary ascribed the bulldozing of Lenin in Belonia to an “overflow of anger” against the 25-year-rule of the Left. Vengeance was identifiably the principal impulse behind the symbolical decapitation of Lenin. The BJP’s ascendancy countrywide has spawned hope in Raja that once his party conquers Tamil Nadu, Periyar will suffer symbolical vengeance for his anti-Brahmin movement. Certainly, the statue of Mookerjee in Kolkata was inked black by radical Leftists who said they were retaliating against the demolition of Lenin.

Likewise, in medieval and ancient India, iconoclasm was often a form of vengeance, undertaken to convince the followers of the vanquished their helplessness, their vulnerability. This was indeed the message the desecrators in Kolkata were sending to the BJP footsoldiers in Tripura: “If you, because of your newly acquired power, can damage the statue of our icon, we can do the same to yours where you don’t control the levers of state power.”

Democracy is described as a battle of ideas, each of which a personality often embodies. For instance, Gandhi represents nonviolence and inclusive nationalism, Ambedkar Dalit assertion and quest for caste equality, Periyar the opposition against Brahminical supremacy and Dravidian sub-nationalism, Mookerjee the idea of Hindutva and Lenin the notion of building a classless society.

Ideas are intangible. Iconoclasm in democracy visually represents the defeat of an idea. More significantly, if subscribers of an idea cannot prevent the humiliation of a person who was its proponent or its best embodiment, they would appear to have been permanently deprived of creative energy. They are deemed incapable of a comeback because their gods were false.

This is more or less the point that Richard H. Davis, professor of religion and Asian studies, Bard College, makes on ancient Indian polity in his essay, ‘Indian Art Objects as Loot‘. He says the king and the deity had a shared sovereignty. This legitimised the king’s authority and turned the deity into the state’s most exalted symbol. When the victorious ferreted away a deity after defeating its patron, he effectively cut off his foe from the very source from which he drew his authority. All chances of his comeback were notionally squashed.

Davis provides umpteen examples from the seventh century to 11th century of Hindu kings raiding temples, plundering them and ferreting away the deities their opponents patronised. At times, the deities passed from one king to another as their fortunes fluctuated over time. This is known to us because inscriptions on deities describe who possessed them till when. Perhaps the ownership of deities led to a symbolical transference of their magical power to the owners.

These meanings, in different ways, were present in last week’s desecrations. To demolish the statue of Lenin was to also demolish the Left’s exalted symbol, to symbolically convey his ideas cannot energise the communists. There has been a growing trend to mutilate Ambedkar’s statues in north India, undertaken to convey to Dalits that their quest for social equality is futile.

The rise of a political party enhances the significance of its icons, as the king’s territorial expansion centuries ago would bestow an exalted status on the deity he patronised. For instance, the portrait of Vinayak Savarkar was installed in parliament during the tenure of BJP Prime Minister Atal Bihari Vajpayee. The Modi government has named a slew of programmes after the BJP ideologue Deendayal Upadhyaya. The theme of deity abduction is also mimicked in India’s modern polity. The BJP’s appropriation of Sardar Patel is designed to legitimise its own past, not least because it was under his supervision of the Home Ministry the RSS was banned. Though Savarkar detested Gandhi and was an inspiration to his assassins, the BJP launched Swachh Bharat Abhiyan on October 2, the Mahatma’s birth anniversary. The BJP under Modi has concertedly tried to adopt Ambedkar as its own, hoping to register political gains through his magical sway over Dalit consciousness.

Conversely, the BJP’s strident criticism of Jawaharlal Nehru is similar in its meaning to Hindu kings sundering the vanquished from the deities who were the source of their legitimacy. Indeed, de-legitimising Nehru is to de-legitimise the Congress. The BJP will not honour the Congress’s icons – Nehru, Indira and Rajiv Gandhi – by naming welfare projects after them. Nor will Congress celebrate Upadhyaya or Savarkar whenever it returns to power.

Every regional party has its own array of icons, their fortune rising with that of their patrons. For instance, the Bahujan Samaj Party’s rise to power in Uttar Pradesh had its leader Mayawati establish parks in which statues of those representing the idea of caste equality were erected. The furore over these statues familiarised upper caste households in north India with these Dalit icons.

The political icons of today are arranged in a hierarchy just as the deities were in the past, their position dependent on the fortunes of their patrons. Badri Narayan in Fascinating Hindutva has collected a list of caste icons who the BJP seeks to include in its own pantheon. For instance, the Modi government named a train after Raja Suheldev, an 11th-century ruler who is revered by the Rajbhar caste in east UP; his statue is expected to be installed in Lucknow’s Ambedkar Memorial. But Suheldev will remain lower than, say, Upadhyaya in the BJP’s hierarchy of icons.

Bihar’s Kushwaha caste has taken to claiming that they are descendants of the Mauryan ruler Ashoka, and celebrate his birthday on April 14, which, by happenstance, is the day Ambedkar too was born. A medley of political meanings is combined here. Ashoka embraced Buddhism, as did Ambedkar in 1956. Social equality is thus demanded both on the basis of political morality and for possessing the attributes of the wise, powerful ruler as their ancestor.

In the pre-Islamic period, the dominant trend was of Hindu kings looting temples and abducting images. With time, instances of demolition of temples too were recorded. For instance, in the early tenth century, the Rashtrakuta King Indra III destroyed the temple of Kalapriya, which their arch enemy, the Pratiharas, patronised. “There is no question that medieval Hindu kings frequently destroyed religious images as part of more general rampages,” Davis writes.

Muslim rulers continued the tradition of desecration and demolition at their conquest of India, though, obviously, such iconoclasm they did not learn here. But it was certainly not an unusual practice centuries ago, perhaps the reason behind the paucity of contemporary Hindu accounts of their trauma at the destruction of temples. Tales of destruction mostly surface in hagiographic accounts celebrating Muslim rulers, often, as a boast.

The statue vandalism of last week frames a perspective on iconoclasm, as also do the countless desecrations of Ambedkar’s idols over the years – that appropriation and desecration of icons in a democratic India is a throwback to the abduction and demolition of idols in a land which was autocratic centuries ago. This realisation could well have been the impulse behind the prompt and welcome condemnation of statue vandalism by BJP leaders. In doing so, though, the BJP privileged statues over humans, their violent abuse rarely leading to its leaders condemning the assailants.