When police tried to arrest the Satlok Ashram head in 2014, his followers refused to let them into the ashram for an entire week. 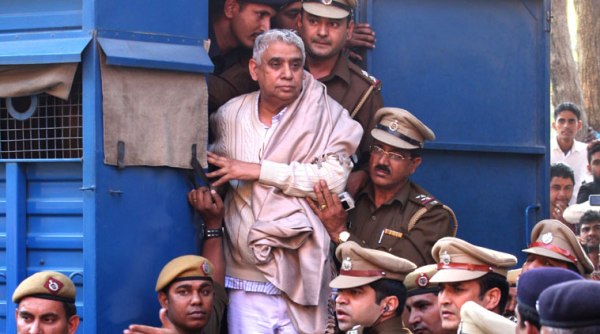 Rampal will remain in jail however, as there are other cases against him that are still pending, including those with charges of murder and kidnapping.

According to NDTV, 67-year-old Dass is accused in an 11-year-old conspiracy case when his followers opened fire on a village in Rohtak, killing one person and injuring several others. He was arrested in 2014, when he failed to make it to court 43 times. Massive violence ensued in his ashram when the police tried to arrest him – close to 15,000 followers formed a protective ring around him within the ashram in Hisar. The state government cut off power and water supply to the ashram after days of not being able to get to Dass. When some followers finally emerged from the ashram, they said they had been kept there against their will. There was a week-long standoff with the police and CRPF personnel which led to the death of people in the ashram – five women and a baby.

After the police finally managed to arrest him, new cases were filed against Dass and his followers, including for murder, rioting, attempted murder, sedition and illegal detention, Hindustan Times reported.

A court is set to pronounce its verdict against two of the cases against the ashram chief today, including for charges filed under IPC sections 186 (obstructing public servant in discharge of his public function), 332 (voluntarily causing hurt to deter public servant from his duty) and 353 (assault or use of criminal force to deter a public servant from discharging his duty), News18 reported. Hearings in the case have been held at a special court at the Hisar Central Jail.

According to News18, the verdict was set to be announced on August 24. The date was shifted after Haryana police requested the court to postpone it, apparently because it was focusing on the law and order situation in the build up to the verdict being announced in the Singh case. At least 32 people died in Panchkula in the riots that took place after Singh was convicted.

Dass calls himself a reincarnation of poet-saint Kabir.