New Delhi: Ram Janmabhoomi Nyas chief Mahant Nritya Gopal Das and Vishva Hindu Parishad leader Champat Rai, who are accused by the CBI in the Babri Masjid demolition case, were on Wednesday elected as president and general secretary of the Shri Ram Janambhoomi Teertha Kshetra, the trust set up to oversee the construction of a Ram temple in Ayodhya.

According to news agency PTI, the first meeting of the trust, held at the residence of senior lawyer K. Parasaran, also elected Prime Minister Narendra Modi’s former principal secretary Nripendra Misra as the head of the temple construction committee of the trust.

We had a wonderful farewell programme for Shri Nripendra Misra Ji at my residence today. Nripendra Ji guided me when I was new to Delhi. He is an officer who understands how India’s democratic system works and is blessed with great conflict resolution skills with a human touch. pic.twitter.com/IRdMSIhTOW

Nritya Gopal Das and Champat Rai were unanimously appointed as members of the trust and were thereafter chosen as its president-cum-managing trustee and general secretary, according to a statement.

Das is chief of the Ram Janmabhoomi Nyas, a trust formed by the VHP, for the construction of the temple, while Rai is a vice-president of the VHP. Both of them have been charged by the Central Bureau of Investigation (CBI) in the demolition of Babri Masjid.

According to reports, the Centre, which had announced the other members of the trust, had left two spots vacant so the autonomous body could elect Das and Rai. Ayodhya MLA Ved Prakash Gupta said in a recent interview that Das’s ‘spearheading of the Ram Janambhoomi agitation was noteworthy’ and that ‘it was impossible to not have his name among members of the trust’.

“If the government had announced their names, it might have created some problem. Some people could have gone to the Supreme Court. That would have led to a delay of two-three months in the work of forming the trust. So, it was avoided,” he said, adding that Union home minister Amit Shah had pacified the Nyas chief on the issue.

“Since the trust formed is an autonomous body, the Shri Ramjanmabhoomi Teertha Kshetra will be free to take decisions about the appointment of the president and secretary of the trust,” he told Rediff.

‘Construction can be started in April’

The meeting on Wednesday was called to work out the modalities and speed up the process for construction of the Ram temple in Ayodhya.

Members were of the view that the construction can be started in April. The temple construction will take three-four years, sources told news agency PTI.

“People’s sentiments will be honoured and temple construction will be started soon,” Das said after the meeting and added that the main model of the Ram temple will be similar to the one planned by the VHP. 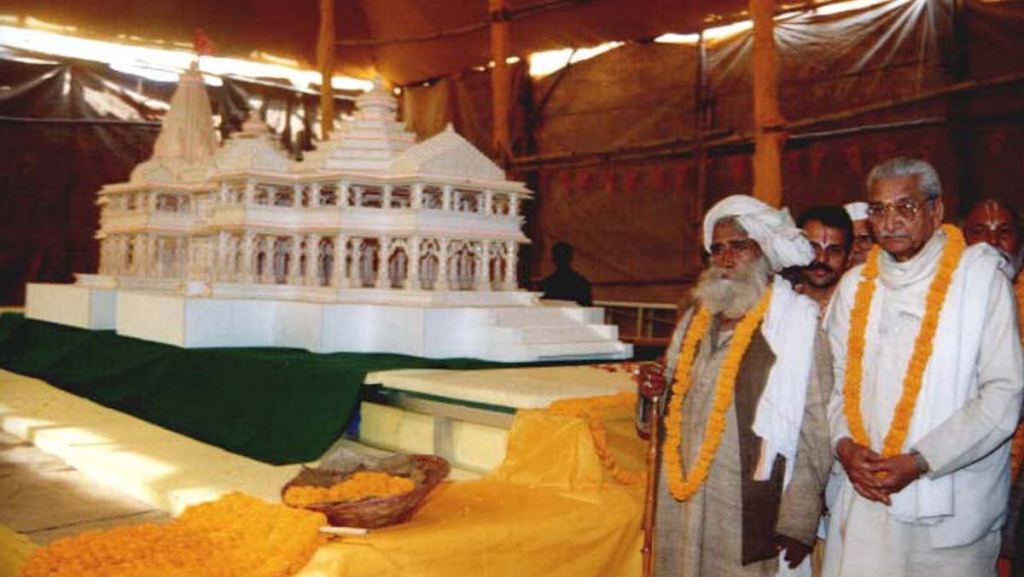 The VHP built a prototype of the Ram temple. Photo: Reuters

Efforts will be made to increase its height and width, he added.

Swami Govinddev Giri of Pune was appointed as treasurer of the trust at the meeting, who was handed over the cheque of Rs five lakh by the Swami Vishwa Prasannatheerth of Pejawar Math in Udupi.

Prasannatheerth is also a member of the trust.

The members of the trust also decided to open an account in Ayodhya’s State Bank of India branch for donations for the Ram temple construction, Rai told reporters after the meeting.

During the meeting as many as nine resolutions were passed, including one thanking Prime Minister Narendra Modi, the Centre and the Uttar Pradesh government for their active role in the entire process.

The trustees also remembered all those who “sacrificed their lives” for the temple and passed a resolution in their memory, Rai said.

All the 15 members attended the meeting of the trust on Wednesday. The next meeting is likely to be held in a fortnight in Ayodhya.

The trust was constituted by the Narendra Modi government, after the Supreme Court’s landmark verdict on November 9 in the Ram Janmabhoomi-Babri Masjid case, handing the disputed land to the Hindu side.

Parasaran had led the Hindu side in the court in the case.

Also Read: The Majoritarian Assumptions That Birthed a Populist Verdict

UP government’s representative led crack down on CAA protesters

A report in ThePrint says that Awasthy, UP government’s representative on the trust, was at the ‘forefront’ of the state’s crackdown on protesters against the Citizenship (Amendment) Act (CAA) in December 2019. He is a 1987-batch officer and is known as Yogi Adityanath’s “right-hand man”, the report says.

Describing Awasthy as ‘the man behind key decisions’ that Adityanath makes, an officer told the website that he is “not very controversial, but he is very much the ‘practicing Hindu’ the government was looking for”. The Union home ministry’s order said that all the members of the trust, including IAS officers, will have to be “practicing Hindus”.

Awasthy, as additional chief secretary of the home department, had asked all telecom operators and internet service providers to temporarily suspend SMS and mobile internet services in December to crack down on anti-CAA protests. He also suggested that the UP government could ban the Popular Front of India (PFI), the report says.