Liberals Now Irrelevant, Except on 'Homosexuality and All That', says Ram Madhav

At a book launch, senior BJP-RSS leader refused to take a stand either way on the decriminalisation of gay sex. 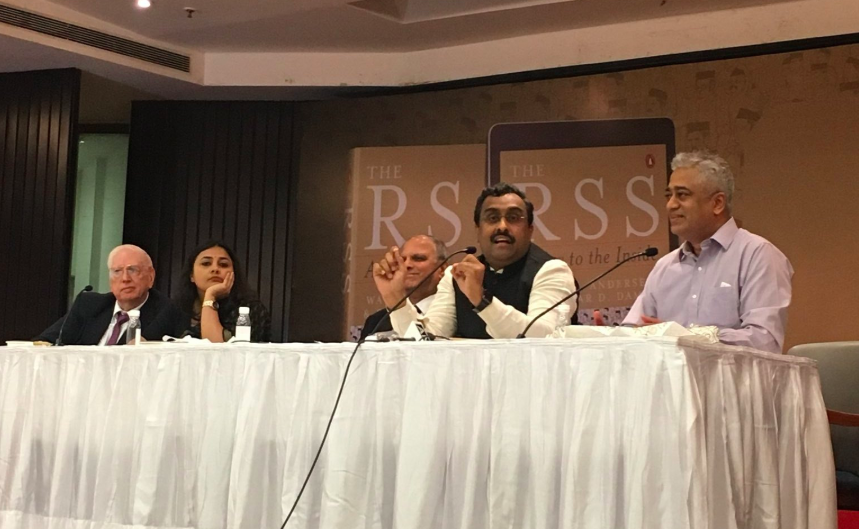 New Delhi: The Supreme Court’s hearings on homosexuality and decriminalisation of gay sex have dominated the news in recent weeks and affect the human rights of millions of Indians but for senior BJP leader Ram Madhav, these are essentially insignificant issues.

“Homosexuality and all that,” was his response to senior journalist Rajdeep Sardesai, while asserting that those opposed to the RSS have now become so politically irrelevant that they can only raise issues like homosexuality. Madhav’s statement, at a book launch here on Tuesday, hinted at the fact that the BJP and the RSS think of criminalisation of “unnatural sex” in Section 377 of the Indian Penal Code – an emotive topic for the LGBTQIA+ community and many rights activists – as an issue that is at the bottom of their priorities.

Madhav made the statement when Sardesai, who was chairing a panel discussion about a book on the RSS, pointed out some contradictions within the Sangh parivar. Sardesai said that while the Swadeshi Jagaran Manch, affiliated to the RSS, is opposed to foreign direct investment, the BJP welcomes it. While citing examples from history, Sardesai also talked about how while the RSS maintains that it is an apolitical organisation, it has vetoed many government decisions in the past.

While Madhav, who was visibly annoyed by this point, termed it as a manifestation of the “internal democracy” of the RSS, he went on to deride Sardesai in an apparent attempt to club the journalist with liberals, who he claimed have no political space in the current Indian polity. “Your actual worry seems to be that there is no space left for you anymore,” Madhav said before quickly adding, “perhaps, only (with issues like) homosexuality and all that.”

Sardesai promptly asked Madhav what he meant by that statement. The BJP leader responded with some ambivalence. “We believe that the criminalisation aspect of Article 377 can be looked in to”, an answer which indicated the RSS might be open the decriminalisation of gay sex.

But when Sardesai probed further to ask whether Madhav concurs with RSS leader Dattatreya Hosabale’s statement that homosexuality is socially immoral and a psychological problem, Madhav said that he will have to ask his RSS colleague about this. He also added, “If he (Dattatreya Hosabale) has said this, it would be the RSS’s official stand.”