In Kashmir, Rajnath Singh Offers Dialogue and Assurances on Article 35A

While making an open call for dialogue, the home minister refused to be specific on whether Hurriyat leaders will be invited for talks. 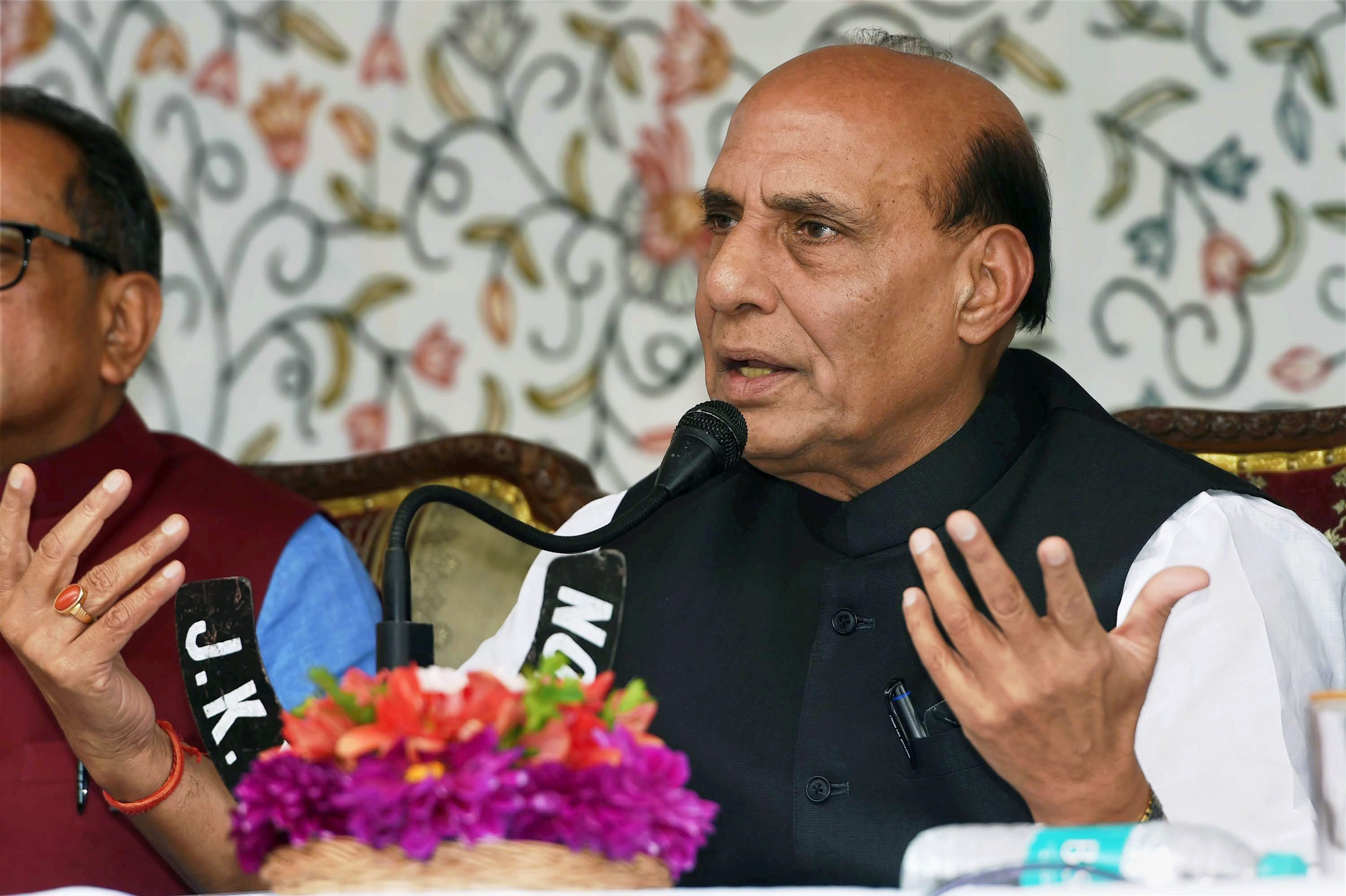 Srinagar: After the 2016 uprising in the Valley, Union home minister Rajnath Singh mentioned on several occasions the Centre’s plan for a “permanent solution” to the Kashmir problem. In May this year, Singh curiously remarked that the “initiative has begun” and the Centre is “moving forward”, but didn’t elaborate. His statement generated surprise and curiosity, particularly in Jammu and Kashmir.

On September 11, during a press conference in the summer capital Srinagar at the end of his three-day visit to the Valley, Singh finally opened up about the plans.

“Many assumptions were made when we spoke of a permanent solution. Our permanent solution is based on five Cs – compassion, communication, co-existence, confidence-building and consistency,” the home minister revealed.

There was no mention of either the Hurriyat or Pakistan in this new plan that Singh spelled out, less than a month after Prime Minister Narendra Modi said in his Independence Day speech that problems in Kashmir can’t be resolved through “gali” (abuse) or “goli” (bullet), but only by embracing Kashmiris.

Today, Singh said, he was in the Valley to mark the beginnings of what the prime minister had promised from the ramparts of the Red Fort.

“Understand the prime minister’s and our intentions,” said the home minister.

Offering dialogue, but no mention of Hurriyat

At the start of his press conference at Hari Niwas on the foothills of the Zabarwan hills, the home minister reiterated that the Centre was willing to talk to all stakeholders in the state to restore peace.

But when asked repeatedly whether the Centre would formally invite Hurriyat leaders for talks, Singh didn’t give a specific response. “What is a formal or informal invitation? I have already said it and how many times have I to repeat it? The government does not want to leave out any stakeholders with whom dialogue should be held. Let somebody come forward and say that I want to talk. I have come with an open mind. I am willing to talk to anyone and I am inviting everyone who is willing to help us in resolving problems of Kashmir,” Singh responded, without naming Hurriyat leaders.

As expected, there was no response from the powerful trio of Hurriyat leaders – Syed Ali Shah Geelani, Mirwaiz Umar Farooq and Muhammad Yasin Malik – who spearheaded last year’s summer uprising to the general offer of dialogue.

During his stay in Kashmir, Singh held a security-level meeting in Srinagar and visited Pulwama district in South Kashmir, which was the epicentre of last year’s protests, to interact with Jammu and Kashmir policemen and those from the central forces. In Srinagar, Singh met at least 55 delegations including leaders of various political parties and members from trade and tourism bodies and civil society forums.

From his interactions with the delegations, the home minister said he could gauge that the situation in Kashmir has improved. “I won’t claim that everything is fine but things have improved compared to last year,” the minister said, adding he can see that “trees of peace” haven’t dried up and he can see the “green shoots of peace” in Kashmir.

Security forces have launched a massive anti-militancy operation in Kashmir in the past 3-4 months, killing more than 60 local militants including five of the 11 top commanders, both from Hizbul Mujahideen and Lashkar-e-Tayyaba.

On the other hand, the National Investigation Agency (NIA) has launched a crackdown against the separatists, arresting at least seven Hurriyat leaders for their alleged role in funding militants and protests in Kashmir.

On the day the home minister landed in Kashmir, Geelani, Mirwaiz and Malik were either put under house arrest or detained following their plan to court arrest before the NIA in New Delhi for the harassment of Hurriyat leaders. 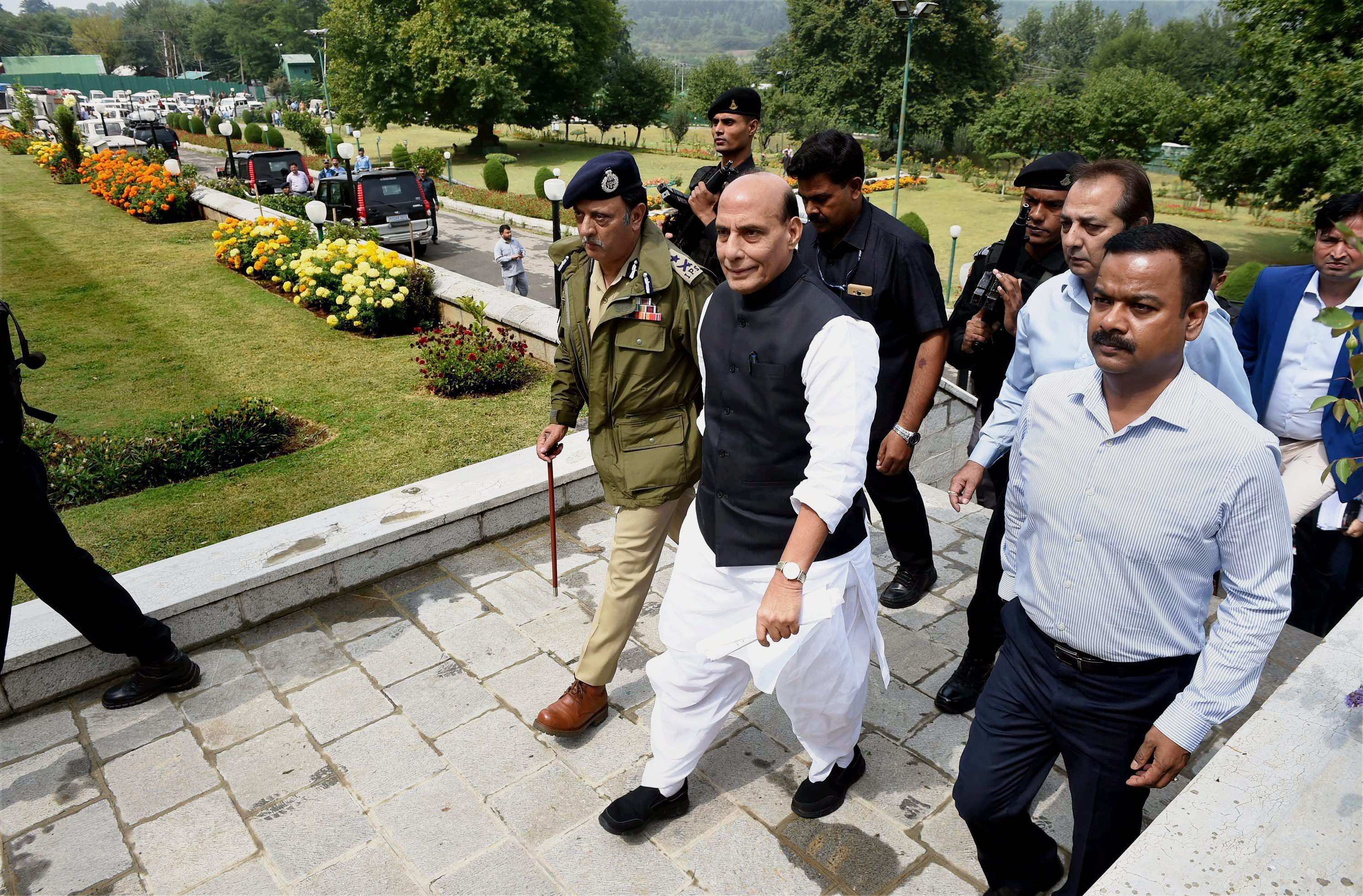 Centre’s stand on Article 35A

If the home minister’s call for dialogue was vague, he took an explicit stand on Article 35A, which is facing a legal challenge in the Supreme Court. Article 35A empowers the state legislature to define the permanent residents of Jammu and Kashmir. The article, which was added to the constitution by a presidential order in 1954, accords special rights and privileges to the citizens of Jammu and Kashmir.

“The central government has nowhere initiated anything with regard to this issue (of Article 35A). We have not gone to court. I want to say it clearly – I am not talking only about Article 35A, whatever our government does we will not do anything against the sentiments and emotions of people here. We will respect them,” Singh said.

He said since there was no real issue left, a “non-issue” like the revocation of Article 35A was being made into a big deal. “This is very unfortunate,” Singh stressed.

However, Singh didn’t clarify whether the Centre is planning file a counter affidavit in the apex court to support the state government, which has demanded that the PIL seeking the abrogation Article 35A be dismissed.

Singh’s statement, the first assurance from any top central minister on Article 35A, came as a breather for the ruling People’s Democratic Party, which is facing criticism for its ally’s, the BJP’s, demand for weakening Article 35A as well Jammu and Kashmir’s special position.

Even former chief minister and National Conference working president Omar Abdullah reacted to the statement on Twitter, terming the assurance on Article 35A as “a very important statement”.

This is a very important statement from the Union Home Minister. His assurance will go a long way towards silencing the noises against 35-A. https://t.co/42lMiqLL4t

The Union government must now file a counter affidavit in the Supreme Court to defend 35-A. That is the way to carry this assurance forward. https://t.co/yo3QmOCNI5

Reaching out to Kashmir?

Since 2016, when the killing of militant commander Burhan Wani triggered large-scale protests in Kashmir, Singh has visited the Valley at least five times. To bring peace to the Valley, he asserted that he wouldn’t hesitate to visit again and again. If the need arises, the minister said he would visit Kashmir 50 times and ensure whatever efforts needed for bringing peace are undertaken; he will not turn back, he said.

“This is my firm conviction,” said Singh, adding he has instructed security forces operating in the Valley to exercise restraint when it comes to the excessive use of force.

He also issued directions to the state government and the Jammu and Kashmir police, saying that “misguided” children shouldn’t be treated as criminals but instead dealt with according to the juvenile system.

While it is too early to rush to conclusions about the assurances made by the home minister, the first test of the government of India will come when the apex court hears the pleas challenging Article 35A after Diwali, as the article has become a rallying point in restive Kashmir.

It remains to be seen whether attorney general K.K. Venugopal, who had told the court earlier that the government wants a larger debate on the law, will follow in the home minister’s footsteps.