The phone numbers under surveillance, the police said, belonged to Ashok Singh and Bharat Malani – who have both had a connection with the BJP in the past.

Jaipur: A month after the Congress government in Rajasthan made a complaint to the Anti-Corruption Bureau over attempts being made to lure MLAs and independents supporting it, the Special Operations Group of Rajasthan Police has arrested two persons – Ashok Singh and Bharat Malani – who have both had a connection with the BJP in the past.

In an FIR lodged on Friday, two mobile numbers that were intercepted over the suspicion of smuggling illegal weapons and explosive substances were found to have had conversations about the purchase of MLAs to topple the government.

“Chief minister and deputy chief minister are having a fight. Taking advantage of this situation, the Congress MLAs and independent MLAs can be broken away to topple the government and a new CM will be put in place,” reads the recorded conversation on the two numbers, as mentioned in the FIR.

Underlining that the motive of the horse trading in the state is to put in place a new CM, the FIR states, “The men said they could earn Rs 1,000-Rs 2,000 crore only if the CM is as per their wish.”

It has also been highlighted that the deputy chief minister Sachin Pilot is aiming to be the chief minister. As per sources quoted by various news agencies, Pilot arrived in Delhi late Saturday night. Due to this, he missed an urgent meeting called by Gehlot at his residence in Jaipur late evening where he reportedly asked his MLAs to give him a letter of support to him.

Addressing a press conference, chief minister Gehlot attacked the BJP, saying its leaders “have crossed all limits of humanity” during the pandemic and that they were playing “a game” on instructions from their central leadership. 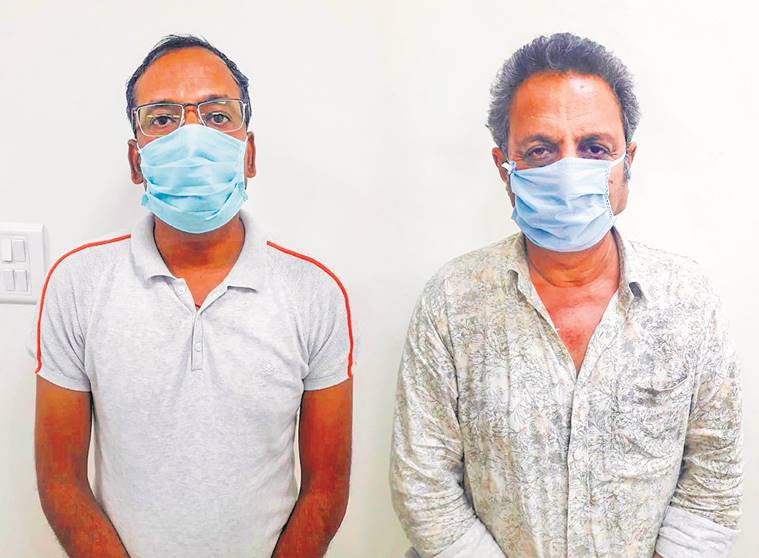 The two BJP members after their arrest by the Rajasthan Police in Beawar on Saturday. Photo: PTI

They said that the political landscape in Rajasthan will quickly transform after June 30. “Pilot’s stars will shine after June 30 and after 5-10 days, he will take [CM] oath,” it added. It is claimed that the SOG would interrogate Gehlot and Pilot over the matter.

The SOG on Friday issued notices to Gehlot and Pilot asking for a suitable time, date and place to record their statements.

The notice issued by SOG.

The FIR has also named two MLAs, one independent and other from Congress, who were being discussed by the men. “A BJP leader is trying to lure Ramila Khadiya, an independent MLA from Kushalgarh in Banswara.”

“Mahendra Jeet Singh Malviya [Congress MLA from Bagidora, Banswara] was earlier at Deputy CM’s [side] but then changed side.”

The FIR was lodged under Sections 124A (sedition) and 120B (criminal conspiracy) of the Indian Penal Code.

The men said that their “Rs 25 crore plan” failed when the CM sealed the MLAs in a resort ahead of the Rajya Sabha elections.

While the Rajya Sabha polls are over, it has been alleged that the MLAs are still offered money. About 20 Congress MLAs have issued a joint statement alleging that the BJP is trying to topple the government.

Meanwhile, the BJP handed over a notice of breach of privilege to the Rajasthan assembly secretary Pramil Mathur against Gehlot over his statement accusing BJP of horse-trading MLAs.

The Wire reached out to Pilot, and this article will be updated as and when there is a response.