"RLP is a constituent party of NDA, but its strength are farmers and soldiers," said Rajasthan MP Hanuman Beniwal, chief of the Rashtriya Loktantrik Party.

Jaipur: With the Bhartiya Janta Party’s ally in Rajasthan Rashtriya Loktantrik Party (RLP) calling out the Union government over its controversial farm laws while simultaneously fighting solo in the ongoing panchayat elections in the state, fissures in the BJP-RLP alliance have been laid bare.

Hanuman Beniwal, the RLP supremo, is a well-known Jat leader from Rajasthan’s Khinvsar. Initially a member of the BJP, he left the party over differences with the then chief minister Vasundhara Raje. He then launched his own party ahead of the 2018 state assembly polls.

During the 2019 Lok Sabha polls, the RLP had entered into an alliance with the BJP in Rajasthan. However, after the elections, Beniwal, through his statements, has expressed his intention of severing ties with the National Democratic Alliance (NDA) for quite some time now.

Most recently, in a tweet on Monday, he said, “RLP is a constituent party of NDA, but its strength are farmers and soldiers. If [Modi government] will not take any quick action, then I might have to consider being NDA’s ally.”

He has told Rajasthan Tak that the alliance had been formed ahead of the 2019 Lok Sabha polls because the circumstances were such that his party couldn’t fight independently.

However, he added that the alliance had benefited the BJP more than the RLP. “Because of the BJP, we might have got 2-3 lakh votes, but our presence fetched BJP over 20 lakh votes,” he told Rajasthan Tak.

The RLP is contesting in 18 of the 21 districts undergoing panchayat elections in the state this year.

Beniwal says that the RLP is preparing the ground for the 2023 assembly elections in Rajasthan where it will overthrow either the BJP or the Congress party from being the top two parties in the state in terms of vote percentage.

Beniwal has a great appeal among the youth in the state, but his position as a ‘farmer’s son’ has always been under question. During the 2018 elections, Beniwal had refused to form alliance with the Left and the Aam Aadmi Party that were leading its campaign in the interest of the farmers.

Rajendra Bora, a senior journalist and political analyst in Rajasthan says that the RLP is only trying to stay relevant in the current scenario. “Beniwal has never been serious about farmers’ issue. Noticing that the protest has turned into a massive movement, he is just cashing in,” said Bora.

He also added that no third front in Rajasthan has survived due to lack of consistency over material issues. “Beniwal might claim that his party might emerge as the first successful third front in the state, but it is going to be a long struggle,” added Bora.

In contrast, another senior Jat leader in the state Rampal Jat has already marched towards Delhi three days ago along with more than 100 farmers and supporters. 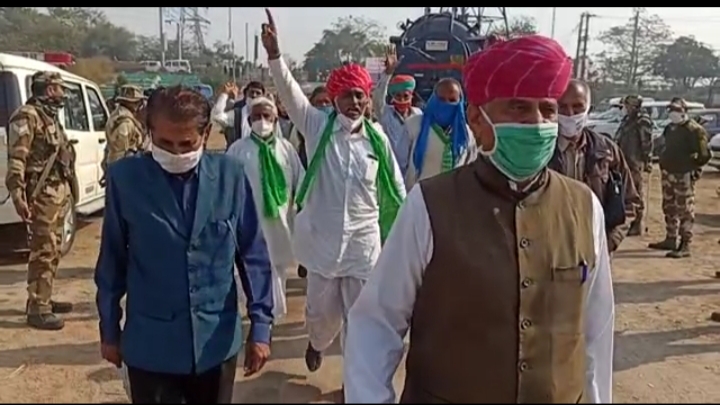 Jat, who is a former BJP leader and Kisan Mahapanchayat founder, has been quite vocal about his agenda of ‘Kisan Raj.’ He had quit the BJP over farmers’ issue in 2019 and joined the Aam Aadmi Party (AAP). He has now left the AAP as well and is working independently.

Speaking to The Wire, he said that the politically-conscious Jat community, which is primarily dependent on agriculture as its livelihood, has been trying to compel the Union government to implement the recommendations made by the Swaminathan Commission across India since a decade.

Talking about Beniwal, Jat said that the RLP leader is still trapped between the BJP and the Congress, and has thus not been able to make any firm decision on whether to support the farmers or not.

“He [Beniwal] has good relations with prime minister Narendra Modi and Amit Shah, so he might not want to risk that. He is still confused which is why he is only tweeting against the Centre, not joining the protest in Delhi,” Jat told The Wire.

Meanwhile, Balwan Singh Poonia, MLA from Rajasthan’s Bhadra, is also set to march towards Delhi along with hundreds of farmers on Wednesday.