Where the Congress leader may have erred is in characterising all those present in the Jaipur audience as Hindus. 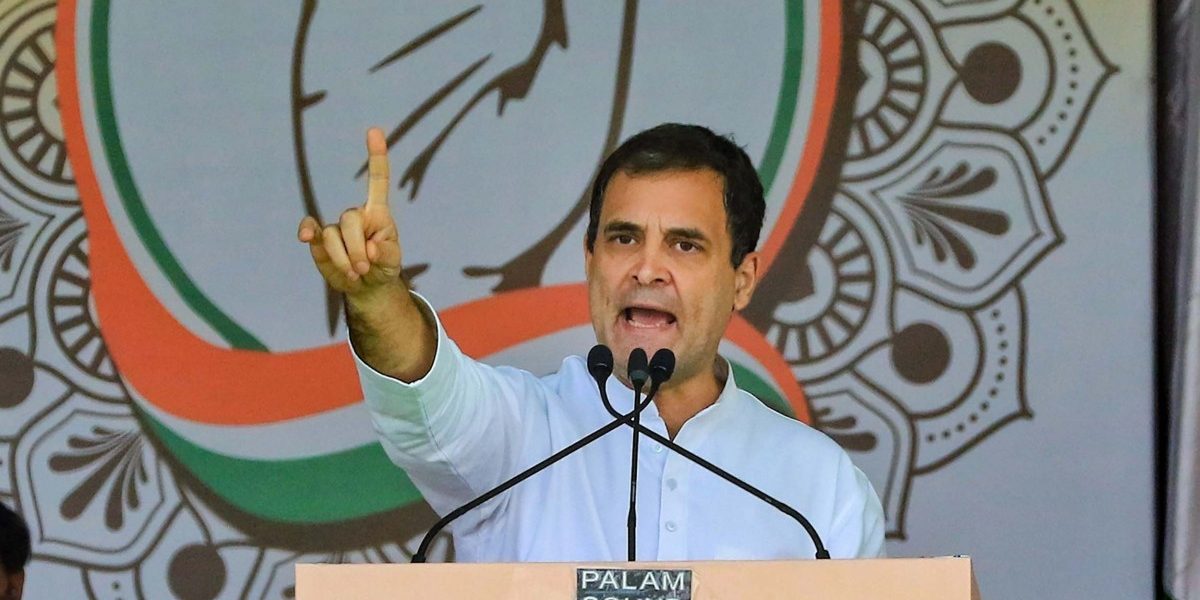 With Rahul Gandhi’s boldly informed enunciation of the difference between being Hindu or Hindutvadi in his address to a massive gathering at Jaipur on December 12, the Congress party may have ceased to walk over egg shells.

Although such discrimination has been made by book writers and hacks like the present one, such an enunciation made by a leader of the Indian National Congress at a public gathering just months before important state assembly elections is tantamount to a significant political initiative.

Many will hope that it will be a long-lasting one.

It is just as well that the coercive and hegemonic appropriation of Hinduism over the past three decades or so should have yielded from the Congress, finally, a crucial distinction, one that must be emphasised with conviction if the secular republic is to be retrieved for India’s overwhelmingly secular polity.

Taking the bull by the horns, Rahul underscored the distinction that whereas the Hindu seeks after the truth (satya), the Hindutvadi pursues state power (satta) by hook or by crook

Invoking M.K. Gandhi as an exemplar of Hindu identity, he drew a stark contrast with Gandhi’s assassin, Nathuram Godse, who, although born a Hindu, acted like a hate-filled Hindutvadi. Rahul suggested how while being Hindu means invoking shanti (peace that holds the entire universe in healthful balance), the Hindutvadi, rankled by his fear of the “other”, commits to acts of hate and violence (what more stark evidence of that than the majoritarian assault on the erstwhile Babri mosque, while a complicit state looked the other way).

Also read: Hindu and Hindutva: Why Nobody Should Be Laughing With Baba Ramdev

These striking formulations have the consequence of reversing the one laid down by the late Justice J.S. Verma at the Supreme Court, when he ruled that Hindutva is a way of life. In fact, it is being Hindu which is a way of life, while being a Hindutvadi is a way of militant majoritarian politics driven by the lust for state dominance (in consonance with Savarkar’s edict “militarise Hindudom”).

That religious/spiritual way of life, if one may expand on the Rahul cryptic, obliges the Hindu to follow an ethical life that has the promise of releasing the subject from the cycles of rebirth, and from the backlog of karma, to find reunion (moksha) with the oversoul (paramatma).

Indeed, Rahul may well have invoked what that most reputed of the philosophers of Hinduism, Sarvepalli Radhakrishnan wrote in his epoch-making The Ethics of Vedanta: that the Hindu regards all creation as one, and this belief enjoins on him a morality that dictates the practice of abheda or “non-difference”.

What a far remove all that is from Hindutva as we have experienced it, especially over the last seven years, should be obvious.

If anything, the slogan of ‘Sab ka saath, sab ka vikas, sab ka vishwas’ seems merely a cunning travesty of that lofty principle of abheda, given what we have seen of the treatment meted out to the largest minority in this country. Imagine that among the over 300 ruling party members in the house of the people, there is not a single Muslim member. Or what Christian institutions are suffering in Karnataka and elsewhere, even as we write, at the hands of vigilantes whose sentiments receive bold support from learned commentators on TV channels.

That the propagation of their Christian faith is entirely consonant with the provisions of the Constitution is entirely lost sight of.

Hindutva clearly seems to have as little to do with Hindu religious thought or moral “non-difference” as chalk with cheese.

Its chief purpose seems to be to use Hindu icons and templates as mobilisers of political ascendancy, denoting vast sections of Indians as “inauthentic” Hindus.

Ironically, the political/hegemonic project of Hindutva obliges it to negate the profound internal plurality of Hindu thought systems that have generated illuminating debates through theological history of the faith, and collapse Hinduism into a formation much like that of the semitic ‘enemy’ it seeks to vanquish: it was the political telos of L.K. Advani’s Ram Rath Yatra (1990) to diminish the faith to one god, one book of scripture and one place of worship in order to facilitate a congregational movement, whereas most denominations of Hindu thought and practice bear chiefly on the quest of the individual mind and soul.

(Caveat: exactly as Hindutva contravenes all the fundamental spiritual and moral insights of Hinduism, Hindu social practices through history have likewise left a great deal to desire, although such anomaly afflicts most organised religions, it must be said.

One has only to read B.R. Ambedkar’s Riddles of Hinduism and Annihilation of Caste, or Kancha Ilaiah Shepherd’s Why I Am Not a Hindu, among a plethora of other readings (the entire work of D.P. Chattopadhyay, for instance) to understand why those social practices have been as little aligned with the high insights and requirements of Hindu thought as Hindutva is. We recall that it was M.S. Golwalkar’s view that the Manusmriti would have been the ideal choice for India’s Constitution.)

Where Rahul may have erred is in characterising all those present in the Jaipur audience as Hindus. Clearly, such characterisation incurs the risk of subscribing to the right-wing propagation that all those who reside in India (Bharat) are Hindus.

Here, for example, is what the September 1983 issue of Vishwa Hindu had to say on the subject: “In pre-Christian times, all people, everywhere in the entire world were Hindus.” (Source: CPI publication No. 13, November, 1983 (c 403), author H.K.Vyas.)

The fact that many hundreds, if not thousands, in that audience must have been non-Hindus thus gets overlooked, unwittingly we would like to think.

Nor is the statement that Hindutva raj needs to be ended and Hindu raj restored a happy one. If being Hindu is essentially a condition of truth-seeking, where does that formulation make sense, or demarcate itself from that which it seeks to deride?

Clearly, the slip-up derives from a lack of alertness in not addressing the gathering as that of “citizens” rather than of Hindus, who, in their diverse plurality alone, constitute proper political subjects in the context of a secular- constitutional democracy.

It must be said, therefore, that if the Congress intends to carry the all-important distinction enunciated by Rahul forward with the purpose not just of reviving the party but of retrieving the secular-constitutional republic, the residual pusillanimity that the grand old party still seems to suffer in not embracing non-Hindu citizens with openness and conviction must be discarded.

It was long overdue for the secular parties to say not just that Indians other than those who subscribe to the right-wing are also Hindus, but that they indeed may be the more real Hindus.

But being more real Hindus must simultaneously mean that they voice and practice the philosophy of abheda, or denominational non-discrimination, which can happen only if all Indians are regarded first as “citizens” equal under the constitution, and then as anything else.

Some interested carpers who speak essentially for the ruling party have faulted Rahul for having brought up a subject at the Jaipur rally which was not its designated agenda (price rise).

A majority of citizens who remain secular to the core – until sectarian leaderships come to fuel them into communal frenzy – will be happy that Rahul has touched upon a conundrum which has disfigured Indian political and social life now for well over three decades, and brought some light to bear on it.

As to price rise, if anything, Rahul quite tersely and explicitly linked the politics of Hindutva with crony capitalism as a class phenomenon.

In citing that 1% of Indians own 33% – and 10% of Indians own 65% – of national wealth, while the 50% share a mere 6%, Rahul put the matter of price rise in a macroeconomic frame of reference which tells us strikingly how moneys are extorted from the common citizen to fatten the crony capitalists.

That formulation may have done more to explain the state of the common Indian’s economic woes than any pedestrian enumeration of data, although, you may have noticed, Rahul also furnished some telling figures of consumer prices, contrasting the pre-2014 and subsequent indices.

Altogether, Rahul’s Jaipur speech must mark a watershed in releasing a new confidence in the debate about the so-called universality and desirability of Hindutva, and, indeed, in having played a powerful forehand shot down the line, sending the ball back into the right-wing court in what may be a rather unreturnable way.

The pressing need for consolidating the distinction Rahul has made is suggested by the measure in which the state has recently collapsed into the ruling party at the Kashi Vishwanath corridor extravaganza at Varanasi, with complicit commentators saying they do not see the problem.

Any observation on the struggles of the republic to retrieve its constitutional core must remain incomplete without a salute to the united movement of India’s food growers.

Transcending all such social and religious fault-lines as suit the politics of Hindutva, their peaceful and admirably sentient mass movement has demonstrated how to go forward, if only all organised political formations imbibe the path-breaking import of that historic movement.