Should the Congress president have spoken to vulnerable Indian workers about Andhra's special status – or about their own lives?

On Friday, in his maiden visit to the United Arab Emirates, Congress party president Rahul Gandhi spoke to Indian blue-collar workers gathered at the Jebel Ali Industrial Area Labour camp in Dubai. He told them that they have made every religion, every state and every caste proud.

“I know that you have to face hardships. You work all day, send money back home for the family,” Rahul told the Indian migrant workers who were waiting anxiously to meet him wearing caps and holding placards.

He added that he had come to tell that he is standing with them.

“Whatever you want, whatever are your difficulties, wherever we help you, we are ready to do it. We want to talk to you. I have not come here to tell you my ‘Mann Ki Baat’, I have come here to listen to you,” Rahul added.

The Congress president also met some workers face-to-face and listened to some of their stories about the challenges of working overseas.

But unfortunately, Rahul missed a chance to tell men and women what they most needed to hear.

Instead of telling the blue-collar workers that their rights will be protected, that they will get a safe, orderly and regular migration opportunities if the Congress comes to power in 2019 in India, Rahul told them that Andhra Pradesh will get special status, which is definitely not a topic of interest for them. And even if it creates some interest, it would be definitely not be the first on a list of priorities.

As a politician who stands a good chance to lead India, Rahul should have told the workers on what he and his party could do if they come to power other than just saying that he is standing with them. 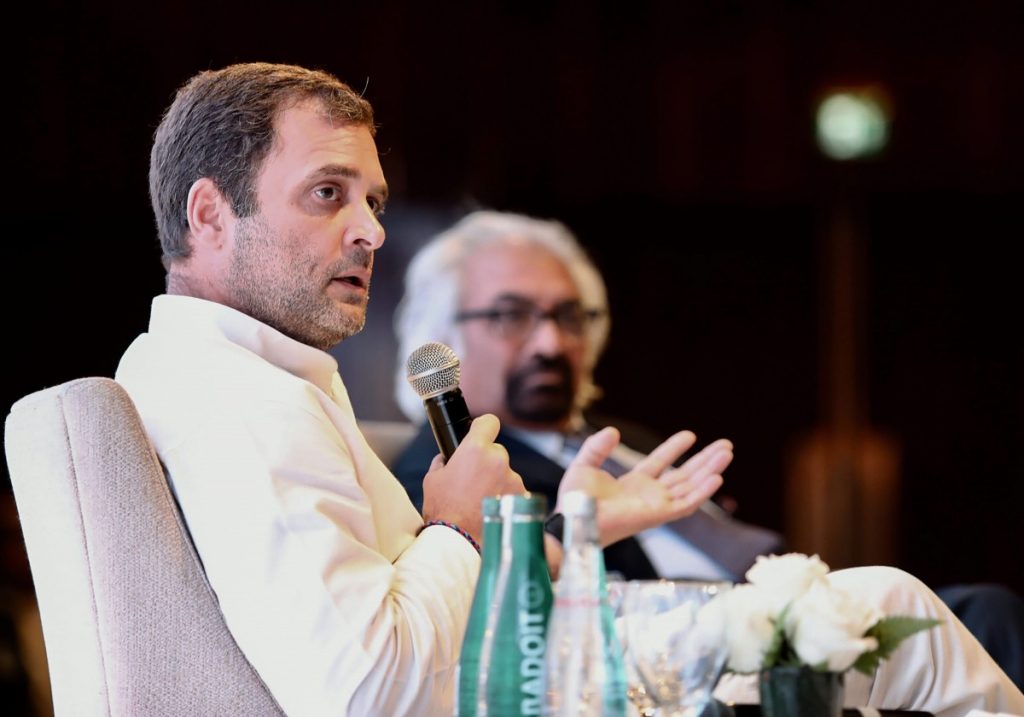 Rahul Gandhi should have told the workers on what he and his party could do when they come to power other than just saying that he is standing with them. Credit: PTI

Migrant workers love to hear from policy makers and those in power, or those who may come to power, on what they can do for their welfare.

There are 30 million Indians migrant workers, with over nine million in the GCC region (Gulf Cooperation Council) alone. Over 90% of the Indian migrant workers who work in the Arab Gulf are semi-skilled and unskilled workers.

While the exact numbers of Indian workers migrating is not known, several studies point to the presence of larger outﬂows of labour migration and the presence of large numbers of undocumented migrants in the GCC region. Indian government’s data shows 520,938 workers migrated for work legally after completing Emigration Clearance Required procedures in 2016, compared to the 784,152 workers who left in 2015.

The number for 2017 was 391,024 (emigration clearance obtained via recruitment agents, project employers and direct recruitment).

However, as per the 2016-17 annual report of the ministry of external affairs, this drop is explained by the decline in crude oil prices and the resulting economic slowdown in the GCC countries.

In different parts of UAE, due to oil price fluctuation as companies are facing a tough time, hundreds of migrant workers are left in lurch without food, accommodation and salary. In December, there were media reports that around 40 Indian workers were left in lurch by a construction company in Ajman, one of the six Emirates in the UAE.

Indian workers are also still duped on fake job offers. Recently, the Indian embassy in UAE had to issue a warning to Indian job seekers not to fall prey to fraudsters.

The cut in spending had affected the cash flow in market, resulting in delay of salaries for migrant workers, a cut in health benefits and denial of end of service benefits. Many were also sacked or forced to take temporary leave.

Unfortunately, when workers return, most of them empty handed, neither the Union government nor state governments take responsibility for their rehabilitation. This is despite the fact that Indian migrants remit around $70 billion annually – making India the largest recipient of remittances in the world.

In 2016, the UN recognised migration as an important topic to be addressed. After negotiations with 193 countries, including India, the global body had launched a Global Compact for Migration with more than 20 objectives to ensure safe, orderly and regular migration.

Even though Rahul would not be able to talk about the Global Compact with blue-collar workers in Dubai, he should have at least told that if he comes to power, he would try his best to follow the Global Compact to protect the Indian migrant workers’ rights – so that nobody is denied pay, respect and rights.

With the upcoming elections nipping at the party’s heels, the Gandhi scion’s advisors should have also thought of the importance of proxy votes that could make a great difference to who wins or loses.

Rejimon K. is a Panos Fellow journalist and a migrant rights activist for the last one decade with Migrant Forum in Asia. He is currently an India-Arab Gulf Senior Investigator at Equidem, which probes workers rights all over the world. He is also a fellowship advisor for Ethical Journalism Network and a media resource person for the International Labour Organisation.