The BJP said the allegations against the Union government are part of an “international conspiracy”, while the Congress said "BJP’s response shows a ridiculous level of contempt for intelligence of the Indian people".

New Delhi: Days after former French president Francois Hollande said in an interview to a news portal that the the Indian government proposed Anil Ambani’s Reliance Defence as the partner for Dassault Aviation in the Rs 58,000 crore Rafale jet fighter deal, the Congress and BJP have been caught in a war of words.

Defending the government, state minister for agriculture and farmers’ welfare, BJP’s Gajendra Singh Shekhawat addressed the media on Monday to allege that the Congress was colluding with foreigners to defeat prime minister Narendra Modi in the 2019 Lok Sabha polls. He said that the allegations against the Union government are part of an “international conspiracy” against India.

Shekhawat addressed the media after the Union defence minister Nirmala Sitharaman cancelled her appearance at the last minute. He said, “The Congress is misleading the nation and demoralising the Indian Air Force by comparing the prices of a bare aircraft, which the UPA was supposed to purchase, with a fully-loaded aircraft, which the NDA has purchased.”

Adding that Union finance minister Arun Jaitley has already clarified the doubts raised about the Rafale deal, he targeted the Congress for not responding to any of the questions that Jaitley had asked Rahul Gandhi, the president of the Congress. Reiterating what Jaitley had already said, Shekhawat said that the NDA regime got the fighter jets at a 9% cheaper rate that what UPA had negotiated with Dassault Aviation, if inflation and technical add-ons are taken into account.

He maintained that the Rafale deal was entirely a government-to-government contract and that the Indian government had no role in Dassault’s selection of Reliance Defence as an offset partner. Yet, he added that the negotiations between Dassault and Hindustan Aeronautics Limited (HAL), the public sector company which was supposed to be get the offset contract in the previous deal struck by the UPA, failed on two counts.

“One, a consensus between Dassault and HAL could not emerge on the work share agreement between the two companies. Two, since the UPA’s offset law mandated that 30% of the equipments had to be sourced from India, the two companies could not arrive at an agreement on the quantum of import and the number of hours each company would give in manufacturing the planes,” he said, despite the fact that  Dassault has been silent on this aspect of the deal until now.

In the previous UPA deal, 18 planes were supposed to be bought by the Indian Air Force in a “fly-away” condition and the 108 were to be manufactured by HAL in collaboration with Dassault, which had to transfer its technology to the Indian public sector undertaking. However, Modi, in April, 2015, cancelled the deal unilaterally and decided to purchase 36 Rafale aircrafts only, all in “fly-away” condition.

Attacking the Congress, he alleged that the UPA intended to extend benefits of the Rafale deal to absconding arms dealer Sanjay Bhandari’s defence company, Offset India Solutions, which is said to have some links with Rahul Gandhi’s brother-in-law Robert Vadra. Although the agriculture minister did not produce any evidence and documents to support his claim, his arguments were in line with other BJP leaders who have mostly chosen not to respond to the questions raised on the Rafale deal but to divert attention by dragging alleged corruption cases during the UPA-II regime.

How the Congress responded

In response, the Congress used the BJP’s attack to highlight how the Union government has still not issued a formal factual reply to the questions raised around the deal.

Addressing the media, senior leader Abhishek Manu Singhvi, said, “The Rafale saga gets murkier by the minute. Like quicksand, it sucks the government into a quagmire each time the government tries to respond or say something. Each time, it exposes the prevarication of the government more and more.”

He said that the Congress, which had submitted a memorandum to the CAG, requesting him to enquire into the deal, has also requested the Central Vigilance Commission to probe the matter. The grand-old party submitted its request to the CVC on Monday.

Responding to the BJP, Singhvi said that some “indisputable dates – all in public domain” show that none of the government officials were in the know-how of the deal and that the deal announced by Modi was primarily signed to benefit the debt-ridden Anil Ambani’s group of companies.

“I want you to note some undisputed dates. March 25, 2015 – Eric Trappier CEO of Dassault gives a statement that the negotiations with HAL were at an advanced state and that the signature date will come very soon. April 8, the foreign secretary of India, S. Jaishankar says Rafale was not on the negotiating table during the prime minister’s visit to France. Neither the Defence Minister nor the finance secretary was present in France. April 10, 2015 – Modi announced the Rafale deal. Only ten days before a new defence company (Reliance Defence) was formed. The tender of the UPA which was operative at that time was not even cancelled. At the time of announcement, the (mandatory) cabinet committee on security (CCS) had not met to discuss the deal. No defence procurement procedure was followed. July 30 – The UPA tender was cancelled only after three months. Much after this, the CCS met and approved the deal. The DPP. Finally, the agreement happens in 2016,” Singhvi said. 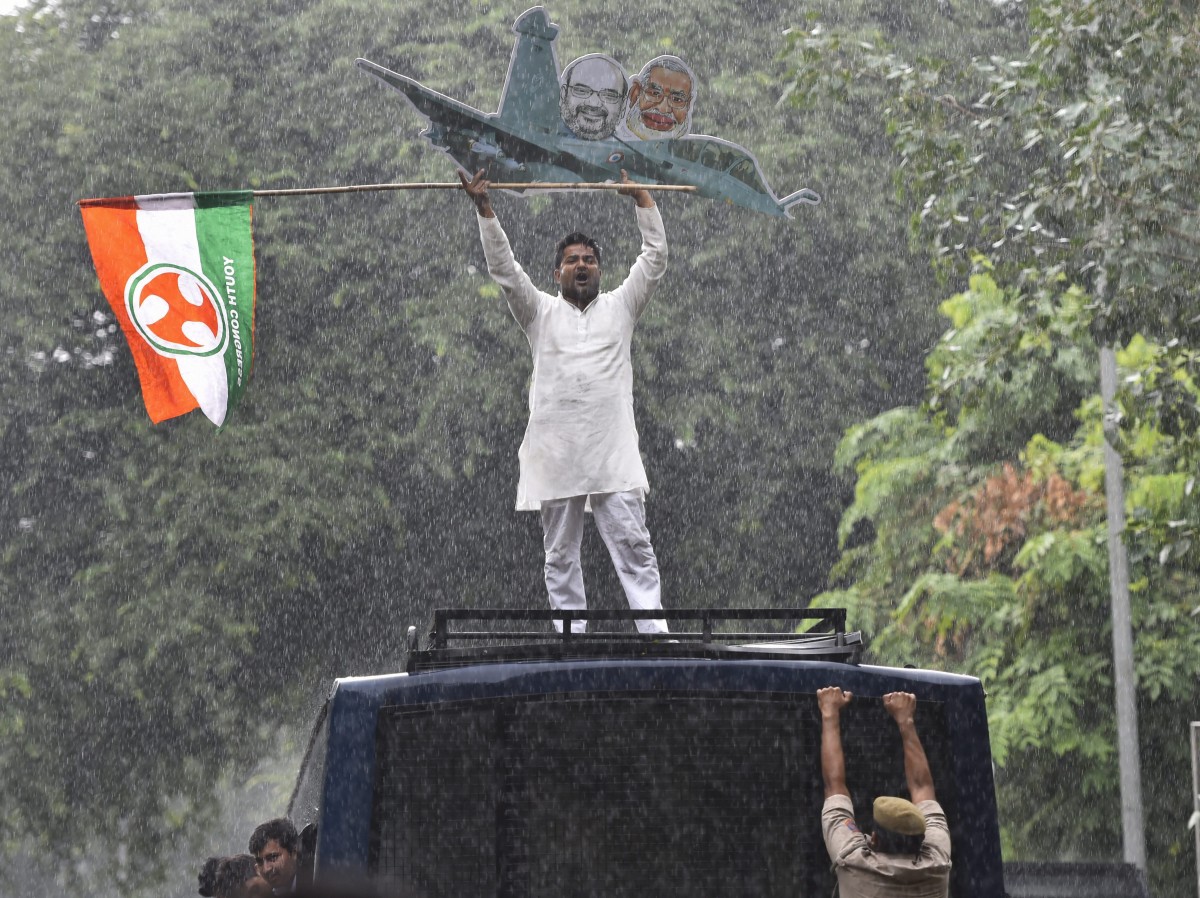 “I only want to ask why the hell will Dassault do an offset contract with (Anil Ambani’s) Reliance, which was on the verge of bankruptcy. What happened between March 25 and April 10 that HAL was thrown out of the negotiations. Something significant must have happened. But we hear only digression, spin bowling, and abuse from the BJP stable,” he added.

On the charge that Congress was colluding with Hollande against Modi, Singhvi responded with a degree of ridicule. “It was Modi who struck the deal with Hollande in 2015. He purchased 36 aircrafts when Hollande was in power. But now the BJP says that it is the Congress which is colluding. BJP’s response shows a ridiculous level of contempt for intelligence of the Indian people. This confirms yet another time the allegations of the Congress are correct.”

He added that such allegations also shows that “the Modi government was prepared to undermine the historically friendly Indo-French relations also to save its skin”. “Cheap politics of the BJP will be allowed to trump even India’s foreign relations arena,” he said.

He also said that Jaitley was trying to undermine the CAG and CVC as independent constitutional authorities by making a public statement that CAG could only do a price-check of the Rafale Jets and its investigation will not lead to the deal’s cancellation. “I find it strange that FM was trying to tell the constitutional bodies what to do. He was speaking as if the CAG is part of his ministry or a subordinate office.

Given the BJP’s unclear response and Congress’s offensive over the last two days, it appears that the allegations of cronyism against the Modi government will likely become one of the primary talking points of next year’s general elections.