Some Bengalis seem to have run out of intellectual ideas. 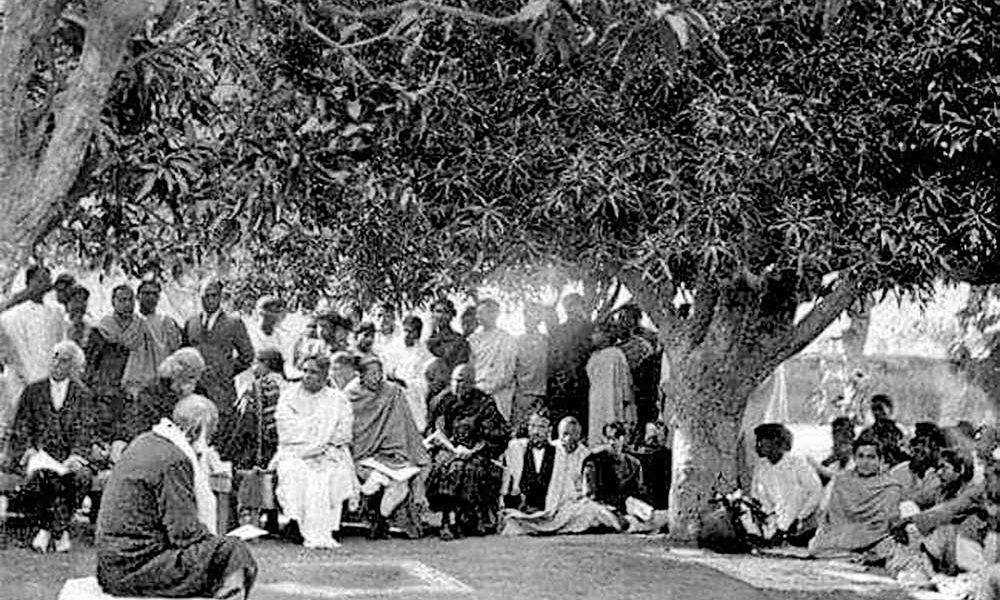 Ugly as it is for vice chancellors and chief ministers to squabble over who belongs and who doesn’t, dragging in Rabindranath Tagore to score a point is as bad as it can get. The matchless vice chancellor of Visva-Bharati University, Bidyut Chakrabarty has now claimed “Gurudev Rabindranath Tagore was an outsider himself,” as were “his colleagues” because “all came from outside Bolpur”.

There must be a gallery of admirers for Chakrabarty’s shocking declaration. And that cannot include the West Bengal chief minister Mamata Banerjee who had, last week, described the vice chancellor as an “outsider”, apropos a provocative move by the university to fence the famous fair ground, “melar math” where the annual “Poush Mela,” is held. The mela is a tradition established in 1894 and is thought to have begun with the celebration of the establishment of the Brahmo mandir, a temple for those of the Brahmo faith. Rabindranath’s father Devendranath had been instrumental in running the Brahmo Samaj.

The vice chancellor’s decision to erect a boundary around the melar math was to maintain its ‘purity’:

“The purpose of the Poush Mela ground fence is to halt the entry of miscreants who come to the mela ground to engage in deviant and dangerous activities. A casual stroll in the Poush Mela ground will result in one seeing liquor bottles, used condoms (as parts of the Mela grounds appear to be a site for sexual activities, especially prostitution), remnants of drugs like ganja, food waste, discarded plastics, cardboards and even human excreta.”

In doing so, he stepped into a minefield on the intangible heritage and sanctity of tradition around the mela and its significance. As VC, Chakrabarty is neither naive nor a novice, he must have known that treading on tradition would ignite a response that would be a mix; from appalled natives of the Shantiniketan ashram, all of whom, incidentally, were originally outsiders, and the local community and leaders, especially the Trinamool Congress.

Also read: The Boundary Wall at Bengal’s Visva-Bharati Campus Is Another Chapter in ‘Mamata vs BJP’

The confrontation over walling in the melar math was crafted to rile locals, political and custodians of the Tagore-Shantiniketan heritage. The demand for a CBI enquiry, the shutting down of the university, and the last, but not least statement that Tagore was as much an outsider as the vice chancellor is a series of moves in a dangerous game of identity politics.

The purity of the “ashram” culture and its traditions has been a sensitive and sore point for decades. The gate that was demolished by a bull dozer in the current imbroglio created a controversy when it was constructed at the turn of the millennium. The pollution of the ethos in Shantiniketan by series of “outsiders,” that is, persons who were not born and nurtured in the spirit of the place has been a continuing dispute, over generations. This time, the idea of the outsider was used to criticise the vice chancellor, who was appointed by the Ministry of Education as a preferment.

It is true, that over the past four decades, almost every vice chancellor, even interim appointees, have been embroiled in controversy over one thing or another. In January, there was an uproar over an invitation by Chakrabarty to Bharatiya Janata Party MP Swapan Dasgupta to speak on the Citizenship Amendment Act and the National Register of Citizens. The assumption that Chakrabarty is sympathetic to the politics of the ruling regime was made then by the Trinamool Congress as well as opposition leaders in West Bengal. The outsider description was therefore not an unexpected attack.

The idea of the outsider, as impure and alien is no longer a quaint and quirky dispute in the context of Shantiniketan, its philosophy, the ideas and ideals of Tagore. By describing Tagore as an outsider the VC has initiated a dark and dangerous controversy. The deliberate stoking of contention is obvious; in a follow up to his own statement, the public relations office of Visva-Bharati iterated the idea of Tagore, the outsider, in a release on Sunday.

The measure by which Tagore is an outsider for the current administration of Visva-Bharati is the national poet’s birthplace. Not born in Birbhum, not born in Shantiniketan is what makes Tagore the outsider at Visva-Bharati. By comparing himself to Tagore as an equal outsider, the vice chancellor has conveniently ignored the roots of the institution he serves, its motto being, “Where the whole world meets in a single nest.”

The idea of exclusion through the bhoomiputra-identity route is the idea of division and separation with menacing undertones. It is the sort of distinction that was used in Nazi Germany. Bhoomiputra politics defined how property and power was reserved for locals in Indonesia and Malaysia. In Birbhum, it would mean challenging the status of anyone who is deemed an outsider by someone in authority. As a district, its population is a mix of caste Hindus, Dalits, tribals, mostly Santhal, and Bengali speaking Muslims. Beyond Birbhum, it would mean challenging the legitimacy of anyone who was deemed an outsider.

Questioning legitimacy in terms of identity is a politics that is already on the boil, though it has been pushed to the back of the stove ever since the pandemic crisis. The string of protests that sprang up against the Citizenship Amendment Act-National Register of Citizens, signalling the rejection of the politics of identity and domicile, was a power-packed moment. Resurrecting it now, even in the backwaters of Shantiniketan, by dragging in Tagore, is intriguing, because he was the author of a slim but powerful pamphlet – Religion of Man. He wrote about the “infinity of human spirit,” its unity as an energising truth.

Bengali pride can be overpowering in its claims to superiority. Reducing the claims, for whatever reasons, to district level bhoomiputra politics suggests that some Bengalis, at least, have run out of intellectual steam. Making distinctions for no reason other than to score a point is as low as it can get.