Punjab Polls: In Doaba, Where Dalits Hold the Key, Will Channi Wave Work for Congress?

Channi remains a dominant factor in most of the reserved seats in Doaba. However, in seats where anti-incumbency against the Congress is strong, the SAD-BSP and AAP seem to be the frontrunners. 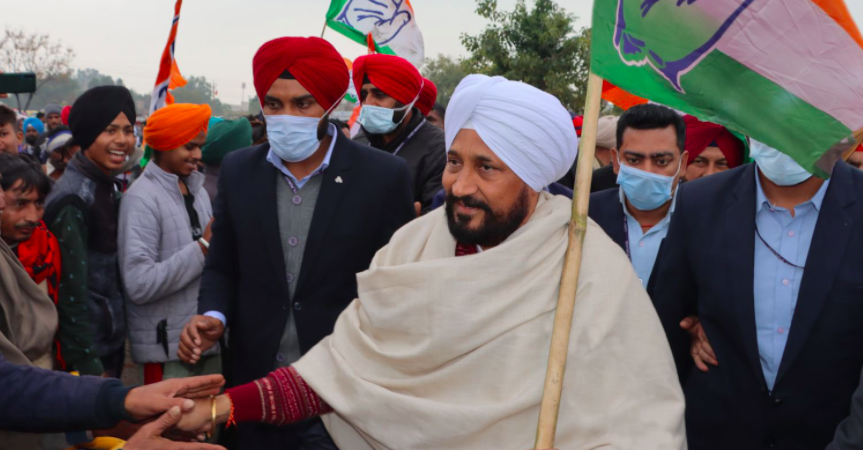 Jalandhar: Punjab’s Doaba region, with an over 32% Dalit concentration, has a history of giving a decisive verdict in favour of a single party. But whether it will repeat its previous record is a difficult question, given the fact that it is a multi-cornered contest in the 2022 Punjab assembly elections. The party that gets the maximum Dalit votes usually forms the government.

While the Congress has pinned all hopes on its first ever Dalit chief minister, Charanjit Singh Channi, the Shiromani Akali Dal-Bahujan Samaj Party (SAD-BSP) alliance came into existence with an eye on a huge Dalit vote bank in the state. On the other hand, the Aam Aadmi Party (AAP), which failed to open its account in Doaba and Majha regions in the 2017 assembly elections, was riding on the popular ‘jhaadu’ wave, which might spring a surprise in some pockets.

However, ground reports show that chief minister Channi remained a dominant factor in most of the reserved seats in Doaba, but which party will take the lead will only be revealed on March 10.

In Sham Chaurasi, which is part of Hoshiarpur district and is reserved for candidates belonging to the Scheduled Castes, a voter Sarabjit Kaur said that ever since Channi came to power, the people had made up their mind to vote for Congress. “It is for the first time that someone from our Dalit community was made the chief minister. We feel a sense of accomplishment and voted for his pro-poor vision,” she said.

There’s a need of educated, learned and grassroots level leaders, who could bring real change in the society, she added. “People want to get rid of mafias in Punjab. They want education and jobs. Only a person who has risen from the ground can understand a common man’s troubles. This is why chief minister Channi reduced power tariffs and petrol and diesel prices. It is a huge relief for the middle class and the poor,” she added.

Another voter, Jaspal Kainth, from Dhadde village of the reserved Adampur seat in Jalandhar shared how the general discussion during his train journey from Begumpura to Seer Govardhanpur in Varanasi was mostly about Channi. “Throughout the journey, the passengers could be heard talking about chief minister Channi and the SAD-BSP alliance. Nobody expected that chief minister Channi would reach Seer Govardhanpur on Guru Ravidas Jayanti to pay obeisance, as those were the last days of his hectic campaigning. His visit enthused the voters,” he said.

But there are certain pockets where anti-incumbency against the Congress is strong and the SAD-BSP alliance and AAP appear to be the frontrunners. In the reserved Kartarpur seat of Jalandhar, first-time voter Gagandeep Kaur said that she wants an educated, accessible and a good leader. 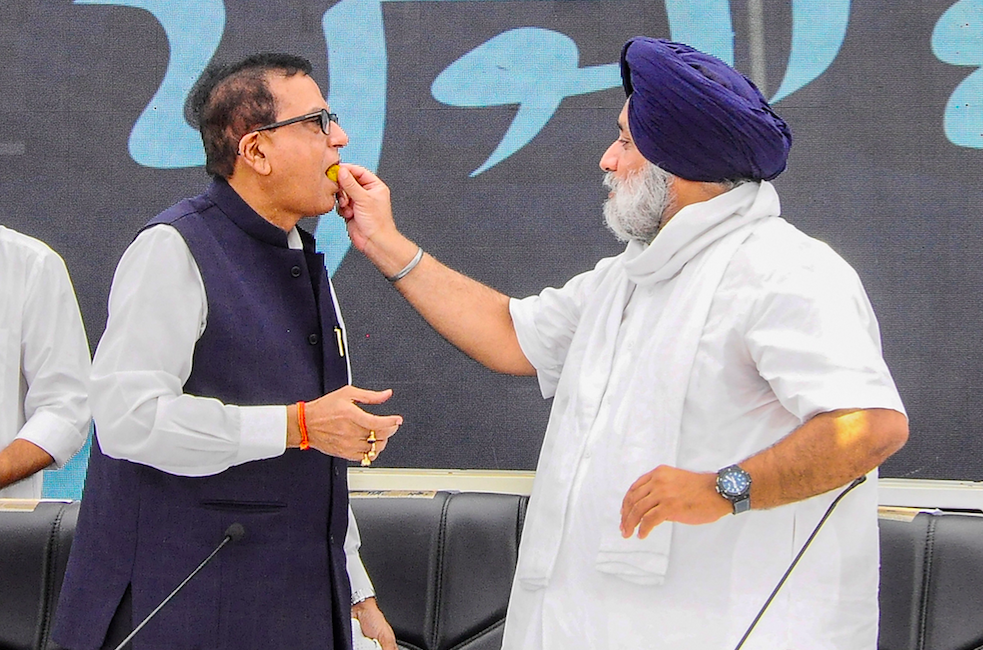 A group of middle-aged women at Ghazipur and Hirapur villages of Kartarpur said, “Here people are either talking about AAP or the SAD-BSP alliance.”

The last time the BSP won the maximum seats was in the 1996 Lok Sabha elections, when the SAD-BSP alliance had won 11 out of 13 seats in Punjab.

Also read: With BJP Facing the Heat in UP, Modi and Crew Pull Out Anti-Muslim Playbook

In Phagwara and Phillaur assembly seats, voters gave a mixed response about their preference for a leader, which varied from Congress, SAD-BSP, AAP and the BJP.

The BJP won the reserved Phagwara seat of Kapurthala district in the 2017 assembly elections, and this time it has fielded Vijay Sampla, ex-Hoshiarpur MP and former BJP Punjab president. However, in the 2019 bypolls, this seat went to the Congress. The sitting Congress MLA, Balwinder Singh Dhaliwal, was pitted against Sampla, SAD-BSP’s candidate Jasbir Singh Garhi, who is also BSP Punjab president, and AAP’s Joginder Singh Mann, a veteran Congress leader from the Valmiki community.

At Khajurla village of Phagwara, another voter Amrik Singh said, “We need respite from drug abuse in our villages and that is why people want to try something new – AAP. But our elderly are asking us to vote for chief minister Channi. We are actually confused about who we should support. There was a time when this region was the hub of chaff cutters industry but it has been wiped out. We need that industry back, and we badly need jobs.”

Similarly, in Phillaur, voters were seen rallying behind the SAD-BSP candidate Baldev Khaira, who is the sitting MLA from this seat. “Our MLA is accessible and listens to our woes. People are talking about the ‘Channi’ wave but we would not like to experiment anything new,” said a voter from Bada Pind village.

Professor G.C. Koul, a Dalit scholar from Jalandhar, who has a doctorate in philosophical study of Guru Ravidas, said, “Though Dalits are divided on castes and religious beliefs, it appears that this time the ‘Channi’ factor played a role in Doaba. It is likely to have an impact on the voting patterns in Majha and Malwa regions too. At the same time, in many constituencies, Dalits have voted for the candidate concerned. But as per my understanding, Congress has an edge in Doaba followed by SAD-BSP and then AAP.”

Koul further said, “Two days before the elections, I noticed how Dalits in different WhatsApp groups affiliated to Guru Ravidas and B.R. Ambedkar’s ideology were forwarding messages like ‘Pehli baar apna banda CM baneya, saare vote payo’ (It is for the first time that our man has become the chief minister, let’s all vote for him) in favour of Channi. Surprisingly, many among them were not even supporters of the Congress as such. If this has actually turned into votes, it will certainly give an edge to the Congress in Doaba. The SAD-BSP will also benefit from the Dalit consolidation in their favour in certain seats.”

Also read: Ten Constituencies to Watch Out for as Punjab Votes

Doaba region has nine assembly constituencies in Jalandhar, seven in Hoshiarpur, four in Kapurthala and three in Nawanshahr district. Out of the 23 seats reserved for the Scheduled Castes, eight hold the key to the poll outcome. But the voting pattern of the rest of the 15 seats matters equally.

The eight reserved seats are Jalandhar West, Adampur, Kartarpur, Phillaur in Jalandhar; Phagwara in Kapurthala; Banga in Nawanshahr; and Sham Chaurasi and Chabbewal in Hoshiarpur. The concentration of Dalit votes – which include Ad-dharmi, Valmikis and Mazhbi Sikhs – on each of the seats is around 35-40%.

The general seats in Doaba too have a strong Dalit presence, which includes seats like Jalandhar Cantt, Jalandhar North, Jalandhar Central, Hoshiarpur, Nakodar to name a few.

In the 2017 elections, Congress won from four seats – Jalandhar West, Kartarpur, Sham Chaurasi and Chabbewal. The then SAD-BJP alliance wrestled control of Adampur, Phillaur, Phagwara and Banga. However, in the 2019 bypoll, Congress won from Phagwara, as the sitting BJP MLA Som Parkash contested Lok Sabha elections and won from the reserved Hoshiarpur parliamentary seat. Parkash is currently the minister of state for social justice and empowerment. On the other hand, AAP failed to make any impact in Doaba, as it just won two seats – Garhshankar in Hoshiarpur and Bholath in Kapurthala.

While in the 2012 assembly elections, the SAD-BJP alliance had put up an impressive show and won seven out of the total eight reserved seats in Doaba. Congress won only one seat.

In the 2007 assembly polls too, the SAD-BJP alliance had a clean sweep in Doaba and won 20 out of the previous 25 seats (which included Lohian and Nurmahal assembly seats, now merged with other constituencies). The Congress had won four while one seat went to an independent candidate.

Dalits’ stronghold in the Doaba region might be a reason why Channi immediately wrote a letter to Election Commission, seeking postponement of elections from February 14 to some other date. The move came after many people from the Scheduled Caste community demanded a change in polling date in the wake of Sri Guru Ravidas Jayanti.