Who Will Be the CM Candidate? Punjab Congress in a Fix As Power Tussle Brews.

While the party has already made it clear that it will fight elections under "collective leadership", there has been a growing demand from several aspirants, including Navjot Singh Sidhu, to announce a chief ministerial candidate before the polls.

Chandigarh: With many leaders aspiring to become the chief ministerial candidate of the party, the stage is once again set for a tug of war within the ruling Congress ahead of assembly elections next year in Punjab.

The situation has been in the making after Amarinder Singh resigned as chief minister in September. The party left the leadership question open, even as Charanjit Singh Channi was made CM.

Last week the Congress’s national leadership hinted that polls in Punjab will be fought under “collective leadership”, finally taking a call on the leadership question after being non-committal on it for a long time. With the party leadership making its intention clear, Punjab Pradesh Congress Committee chief Navjot Singh Sidhu has been flexing his muscles, cautioning the party over entering the poll fray without a chief ministerial candidate.

From a series of interviews available on his Twitter handle, one can clearly imply that Sidhu has been building pressure on the party national leadership to project a candidate who has an agenda and who can deliver. In fact, it is similar to the kind of pressure he had exerted on the leadership to dislodge Amarinder Singh.

In all these interviews, Sidhu had slammed the opposition as well as his own party colleagues for “ruining” Punjab and had alleged that they are focusing on providing freebies rather than long-term policies.

On the other hand, he promised to bring structural changes and free the state from the clutches of a system “controlled by 100 powerful families”, who he accused of plundering the state and leaving it with a debt of Rs 3 lakh crore.

Also read: With Sidhu ‘Almost Certain’ To Be Made Punjab Congress Chief, Tensions Escalate Within Party

“Will those who have eaten hills of gravel and sand or promote liquor syndicate ever dare to bring policy to bring mining and liquor business under state control? Only a person with moral authority can do it,” Sidhu said in one of the interviews.

Speaking to The Wire, political commentator Harjeshwar Pal Singh says that through his political message, it is clear that Sidhu has been putting pressure on the national leadership to declare him as the chief minister candidate. 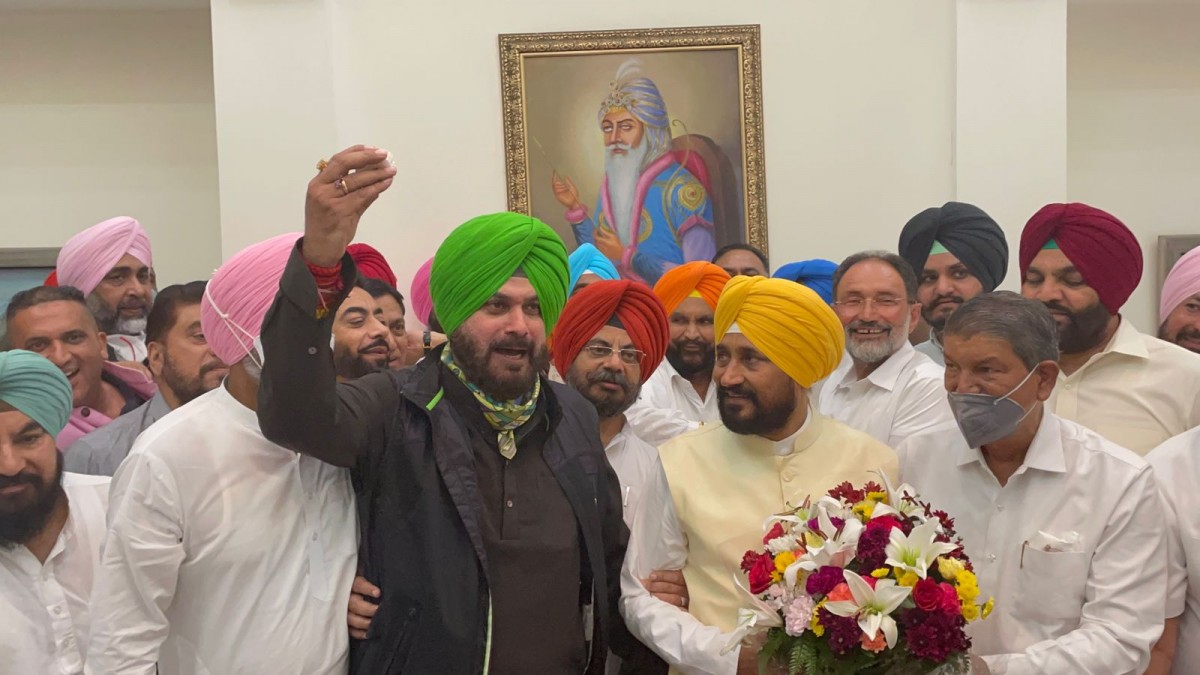 The question is whether or not the Gandhis will blink, given that they did not make Sidhu the chief minister after Amarinder Singh was pushed out.

Instead, the Gandhis favoured Charanjit Singh Channi, an MLA from the Dalit community, for the coveted post. He has since been attracting the masses through various campaign moves. He drove a bus recently – perhaps a metaphorical message that he is in the driver’s seat.

Sidhu also seems to be attacking the CM. In a recent public address at Batala, Sidhu had questioned if the Channi government can go beyond filing a first information report (FIR) against SAD leader Bikram Singh Majithia.

“FIR will do nothing. Sidhu will not sit idle until the arrest is made. If you have to do just formalities, then FIR was also filed in the Bargari sacrilege case,” Sidhu had said from the stage.

Further asking people during a rally if they were getting sand and cable connection at cheap rates as announced by Channi recently, Sidhu had said such issues cannot be fixed through mere “talk” and “jugaad”.

Harjeshwar says that the situation in the Congress now is unpredictable. On the one hand, Sidhu has been pushing his own agenda, while on the other, Channi is pleasing the masses. Between them, there is a range of other leaders like Sukhjinder Randhawa and Sunil Jakhar floating around with their own aspirations.

“That is the reason why the national leadership has decided to fight Punjab elections under collective leadership, leaving the question of who will be the chief ministership to later. But the problem is that Sidhu is not toeing this line,” said Harjeshwar Pal Singh.

Sidhu said in an interview to Hindustan Times, “After the election, it will be late [to decide who will be the CM].”

He added, “People will decide whom they will vote for, who will deliver and who has the agenda. If we give them policy, a road map and an honest being who can deliver, people will understand.”

He had then said, “If you sell them dreams and lies, they will not. They are aware that there is a game of chess going on.”

Sidhu skirted the question when asked if the Congress high command should announce a chief minister candidate.

He had rather said, “What happened last time in Punjab? The Congress CM face was announced while Arvind Kejriwal (AAP leader) did not and he lost.”

Many believe that the Congress itself is responsible for its present situation.

Speaking to The Wire, political analyst Pramod Kumar says that Punjab is a pluralistic and secular society where communities never vote as blocks.

However, the Congress seems to have effected a change in an attempt to find a replacement for Amarinder Singh. It is public knowledge that the party ignored Jakhar and then began attempting to woo Dalit voters after Channi became the CM.

“Now Congress fears that if they declare Sidhu as the chief ministerial candidate, Dalits may turn away. If they ignore Sidhu, he will create trouble for the party. Basically, the party is in a fix,” adds Pramod Kumar.

In a recent interview with The Hindu, senior Congress leader Sunil Jakhar had stated that “certain party leaders”, when the decision of replacing the chief minister was being deliberated on, publicly stated that “a Sikh should be the chief minister of Punjab” and implied that other sections of society were not entitled to the top post.

He had further said that such perception had to be nipped in the bud because Punjabis don’t feel that way.

“I have never been made to feel like a second-class citizen. I’m a proud Punjabi… more than anything else, I’m a proud Indian. And every Punjabi is a first-class citizen. It was out of their own insecurities, petty vision, that these leaders have created a bogey of ‘religious identity’ in Punjab, which is neither the Congress party’s ethos nor, definitely, the ethos of ‘Punjabiyat’,” he had added.

He had further clarified that the upcoming election was not going to be built around “one particular person”. “The last campaign [2017] was around Captain Amarinder Singh, but it won’t be on that line this time. It’s going to be a joint Congress. We will be fighting on our performance; a lot of development has been achieved in the state.”

As the Congress wrestles with the question as to whether or not to declare a chief ministerial candidate, the opposition in Punjab has got enough space to politically target the party.

Many political observers believe that in the weeks to come, the leadership question will trouble the Congress more intensely than before. The pressure will further mount on the grand old party once other parties announce their chief minister candidates.